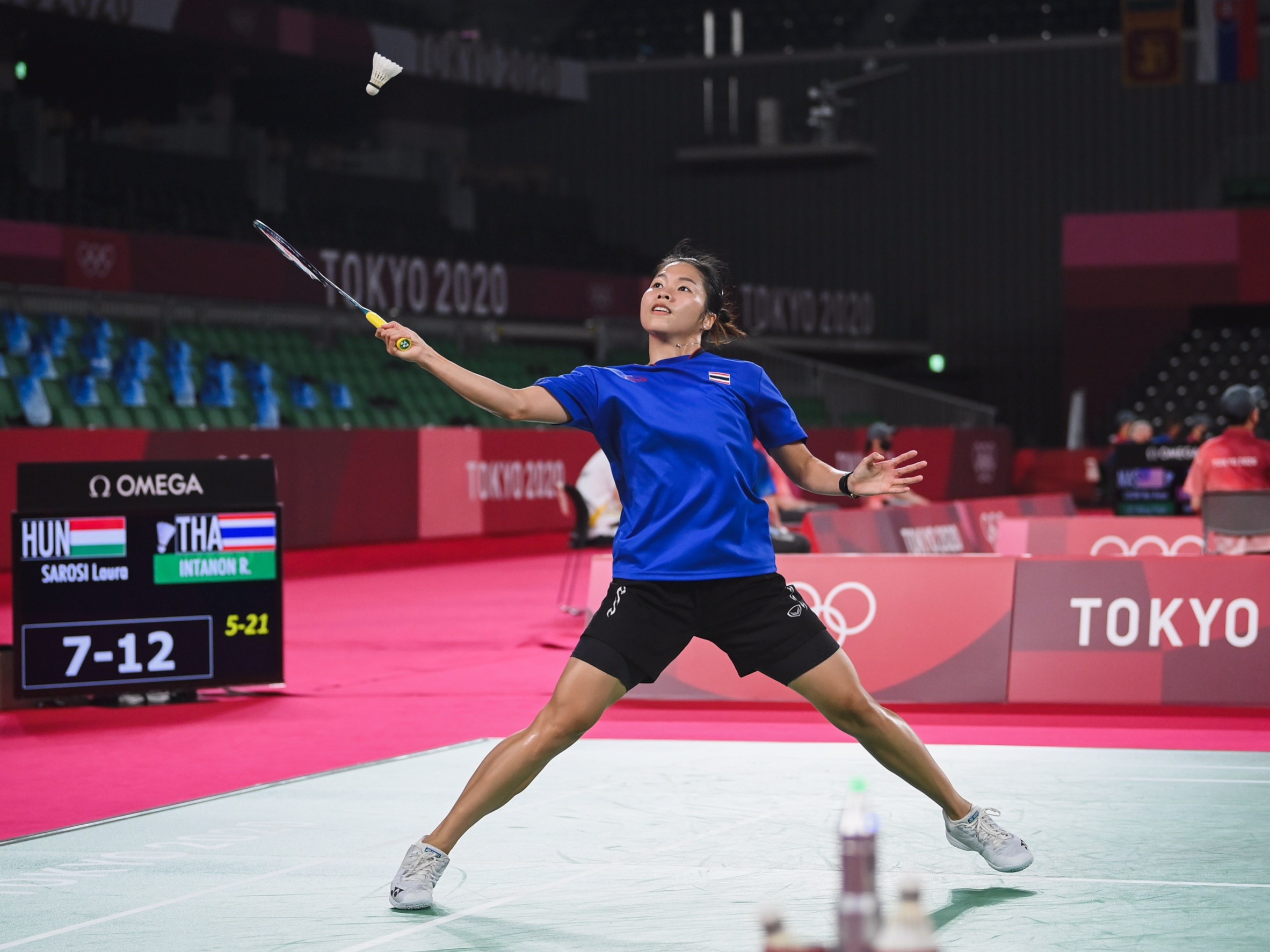 25 July 2021: World No 6 Ratchanok Intanon and mixed doubles medal hopes Dechapol Puavaranukroh and Sapsiree Taerattanachai remained in the hunt for medals at the Olympic Games TOKYO 2020 at the Musashino Forest Sports Plaza in Tokyo on Sunday.

The 2012 Games quarter-finalist Ratchanok kicked off her campaign in Group N against Laura Sarosi of Hungary and, as expected, prevailed in straight games, 21-5 21-10.

“It was almost a good match except for the second game. I was a bit off and had to talk to my coach to regain my focus. Next round I will need to be more focused against a Malaysian girl,” said Ratchanok, who will rest tomorrow before going back into action against Soniia Cheah Su Ya of Malaysia on Tuesday.

In mixed doubles group B, Dechapol and Sapsiree cruised past Thom Gicquel and Delphine Delrue of France  21-9 21-15 for two wins in a row.

“Everything has gone according to our game plan after two rounds. We have had no problem adjusting to the conditions on the court,” said Sapsiree, who celebrated two back-to-back Thailand Open titles and one BWF World Tour Finals triumph with Dechapol in January.

“Our goal is to finish top of the group. We have one more group-stage match with the British pair and we will give it 100% against them,” said Dechapol. The Thai duo take on Marcus Ellis and Lauren Smith on Monday.

In men’s singles group K, Kantapon Wangcharoen was briefly tested by Kai Schaefer of Germany before winning 21-13 21- 15. The 14th-seeded Thai meets Toby Penty of Great Britain in his last group match on Wednesday.

However, the women’s doubles team of Rawinda Prajongjai and Jongkolphan Kititharakul suffered their second straight defeat, losing to Kim Soyeon and Kong Heeyong of South Korea  19-21 22-4 in group D to end their chances of a berth in the knock-out stage.

In shooting , 2016 Asian Championships silver medalist Isarapa Imprasertsuk missed only three targets in scoring 72 points to trail co-leaders Diana Bacosi of Italy and We Meng of China by three shots in the women’s skeet qualifying at the Asaka Shooting-Shotgun Ranges on Saturday.

The unfancied world No 32 missed two clays in the first shoot and one in the second but shattered all targets in the third to sit fifth with 72 points. Bacosi and Wei gave faultless performances, each firing a perfect score of 75.

Sutiya Jiewchaloemmit, in her fourth Olympiad, was in 13th with 70 points. Each shooter will take aim at 50 more targets on Sunday when only the eight top scorers will move into the final.

However no Thais survived qualifying in the women’s 10m air pistol at the Asaka Shooting Range. Tanyaporn Prucksakorn, in her fourth Olympic Games, shot 570 to finish in 22nd while national flag-bearer Naphaswan Yangpaiboon fired 560 points to end up 39th out of 53 shooters.

In Judo, Thai-Japanese Kachakorn Warasiha lost to Iraoui Soumiya of Morocco by Ippon-seoi-nage golden score, 0-10, in the women’s 52kg opening round at the Nippon Budokan venue.

At the Sea Forest Waterway in Tokyo Bay, Siwakorn Wongpin and Nawamin Deenoi settled at bottom sixth in the  lightweight men’s double sculls Repechage with a time of 7:20.50 minutes in heat 1. They will compete in the final C for classification on Tuesday.

At the Fuji International Speedway, Jutatip Maneephan was eliminated during the first 80km course as she fell 12 minutes behind the leading packing in the women’s road race event.