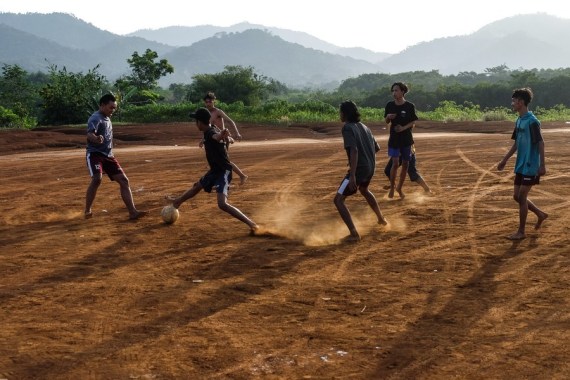 Playing football like the old days is still a wild thought amid the pandemic, though limited sports activities are allowed following eased restrictions from Level 4 to Level 3 in Indonesia.

Bernard Budiman, a healthcare entrepreneur from Jakarta, has been itching to play football again.

Since the implementation of the public activity restrictions in the islands of Java and Bali, locally known as PPKM, indoor and outdoor sports facilities were closed in accordance with PPKM Level 4, the highest level of restrictions.

Yet, even as the restrictions have been lowered from Level 4 to Level 3 in Jakarta, meaning limited sports activities are now allowed, Budiman remains hesitant to resume playing.

"I really miss football, but I think it's still too early to participate in outdoor sports," Budiman told Xinhua.

The Indonesian government announced to extend PPKM in Java and Bali for another week to Sept. 6 during a virtual press conference in Jakarta on Monday. President Joko Widodo said that there are now 25 municipalities in Java and Bali which are still implementing Level 4 restrictions, compared to last week's 51.

Under the latest Level 3 rules, sports facilities in open spaces are allowed to reopen with 50 percent capacity and masks are required to be worn at all times, except for sports such as swimming.

Budiman has been conducting shooting drills and footwork practice with one or two of his friends in his backyard, where he owns a goalpost.

They used to play on football pitches located in South Jakarta. According to Budiman, the pitches are now open and available to rent again.

The last time Devin Buana, a recent university graduate living in Jakarta, played football was in June. Several members from his football community were tested positive for COVID-19 shortly after the group's last session in the Senayan area at Central Jakarta.

Before the pandemic, Buana used to play as often as twice to three times a week.

Buana shares a similar concern with Budiman, which is the fact that the COVID-19 pandemic would be easily contracted from the constant physical contact and close breathing that occur during a football game.

Xaviera Naomi, an Indonesian college student in the United States who is currently back in Jakarta, started playing football with her high school friends at a mini soccer pitch in South Jakarta on Friday.

"We put masks on at all times and play four versus four games. Last weekend, a total of twelve players came, with eight playing in the field and four sitting on the bench," Naomi explained.

She added that all of their temperatures' were checked upon entry, and seats were socially distanced.

Moving forward, Budiman said that he will start playing football again when the government achieves its target of vaccinating 208.2 million people across the country by January 2022.

"Building herd immunity is the only solution for the resumption of group sports activities," he said.