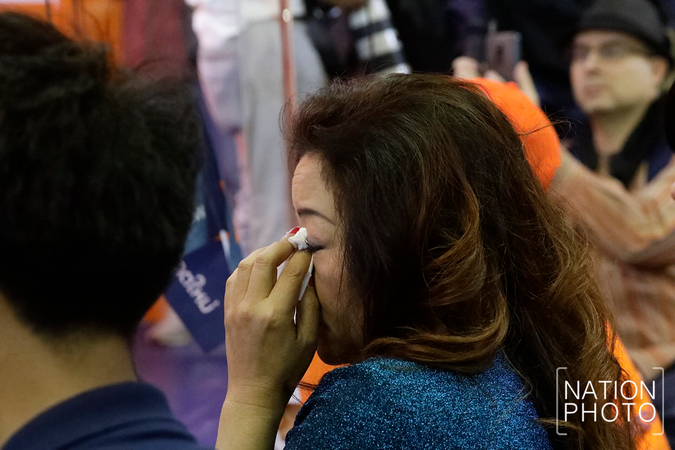 FWP supporters react to the court's  verdict  at the party's  headquarters on Friday.

Dozens of law lecturers at Thammasat University on Monday (February 24) issued  a joint statement  expressing  their objection to  the Constitutional Court’s ruling to disband the Future Forward Party and bar its executives from politics for 10 years on the grounds that the party received illegally a loan of  Bt191 million from its leader  Thanathorn Juangroongruangkit.

The 36  lecturers said the judges did not interpret the law correctly and warned that the current  political conflict could only be resolved  through accurate and fair interpretation of  the laws.

They did not agree with the court's  verdict, the lecturers said,  which stated that a political party is barred from borrowing money.

A judicial body blow to democracy

First, they argued that a political party is not a public juristic person, because they could not exercise public power. Political parties are more like corporates or charity foundations which do not have public power. Political parties can only propose policies under  the international benchmark and the Thai law system. Previous rulings on cases  by the Thai Administrative Court were  in line with this international practice.

On the second point, they did not agree with the court's  reasoning that  given the interest rate on the loan was lower than the market rate, it should  not be considered a  loan. The law lecturers argued that lower interest rate charge was not an unusual practice in the market, the rate charged depended  on an  agreement between the borrower and lender.

Therefore, the low-interest  loan is not a donation which is stated in section 66 of the Organic Act on Political Parties. It is a debt that the political party needs to pay back.

On the third point,  section 72 of the Organic Act on Political Parties which prohibits political parties to receive unlawful money ,or deemed being originated from illegal activities, could not be applied  to this case.

The maximum donation of Bt10 million a year per donor under  section 66 does not relate to section 72, the two sections must be applied separately unless there is clear evidence that the  money was  unlawfully acquired  or  originated from illegal activities, the law lecturers said.

Therefore, violation of  section 66 cannot be the reason for dissolving  the political party.

By principle of law , the Constitutional Court must limit its  power in ruling on cases involving  political party dissolution. Dissolution must be the last resort and should be imposed only when a  political party has committed  serious wrong-doing that could not be protected by the freedom of expression principle.

" If there is no clear evidence, the court has to limit its own power," said law experts.

“We believe that the prolonged  political conflict could be resolved by accurate law interpretation and justice . Democracy could survive if law professionals do their duties without prejudice and people jointly find a way out of conflict with proper reasons and patience,” they say in the statement jointly signed by the 36 law lecturers, which noted  that their opinions did not represent the views of  Thammasat University’s Law Faculty.