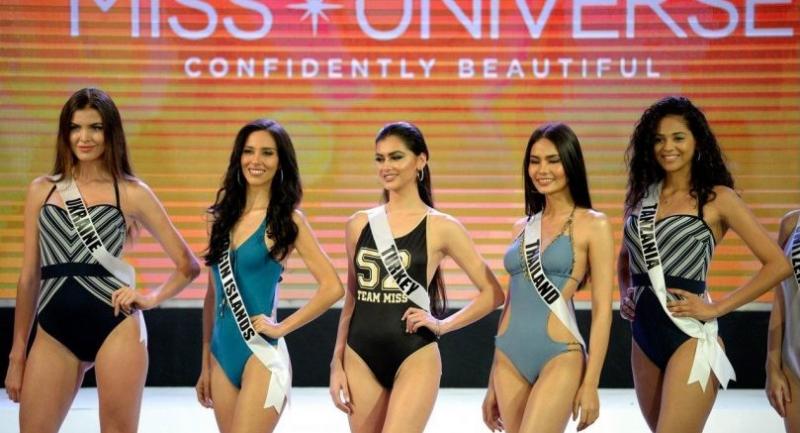 ‘Cattle show’ or path to fame?

Much of the world sees the Miss Universe pageant as an embarrassment, a tawdry anachronism that belongs in the past.
In the Philippines, however, it still stirs as much frenzy as the World Cup does among Europeans or the Super Bowl in the US.
On Monday, this national obsession will be manifested in all its glory when the Philippines hosts the Miss Universe pageant.
All 86 candidates are already here, and they have been everywhere. They make headlines every day as they frolic on the white beaches of Boracay, turn the cobblestone streets of Vigan City into a fashion catwalk, and sashay in swimsuits in Cebu.
Everywhere they go, they are mobbed like rock stars. They are also appraised, debated on, and ranked. Big bets are being placed.
Meanwhile the contestants’ every move is being talked about. Witness the commotion over Miss Malaysia Kiran Jassal’s diamond-encrusted jumpsuit, with foot-high replicas of the Petronas Towers jutting from her shoulders.
These women are now gamely exposing themselves for everyone’s entertainment, and this nation of over 100 million cannot get enough of them.
But they are also the centre of fevered debate over whether beauty pageants can ever really rise above what feminists deride as “cattle shows” and be relevant in a world racked by terrorism, economic uncertainty and conflict over race, inequality, gender, religion and birth control.
Philippine women’s rights group Gabriela has weighed in, calling the pageant a “manipulative and deceptive tool that projects an image of peace and stability to cover up the creeping influence of fascist repression of poor women’s rising protests”.
Arlene Brosas, the group’s representative in Congress, calls it “yet another attempt to package the Philippines as a lurid tourist destination for cheap, easily exploitable women”.

Ogled ‘like pigs’ at market
But perhaps the most scathing indictment comes from someone who has herself been on stage, picked apart, in her own words, “like pigs being sold in the market”.
Imelda Schweighart, who represented the Philippines in last year’s Miss Earth pageant, recalls having an epiphany as she wore a bikini backstage, with dozens of other women.
“We were like meat waiting for our turn to strut our stuff,” she wrote in a Facebook post.
Others lament that the pageant is being held as thousands are being killed in President Rodrigo Duterte’s bloody war on crime.
For tourism officials here, these criticisms are unfair, sweeping and myopic.
Tourism under-secretary Katherine de Castro says the Miss Universe pageant, though still essentially a beauty contest, has also given women a powerful platform to push various causes. She points out that the reigning titleholder, for instance, the Philippines’ own Pia Wurtzbach, has made her mark raising HIV awareness.
Wurtzbach herself regards the beauty aspect as “bait” to get people to listen to more serious advocacy of issues such as gender equality and human rights.
There are beauty contests run like lurid sex shows, says Professor Jose Wendell Capili, an anthropologist at the University of the Philippines. But generally, pageants, especially marquee ones like Miss Universe, Miss World and Miss International, have provided Filipino women a portal to instant fame and opportunities for a better life.
“Many pageant winners become successful celebrities after winning. Many see pageants as a stepping stone towards becoming a celebrity and an advocate for worthwhile causes,” says Capili.
Past winners have gone on to become actors, doctors, lawyers, businesswomen and politicians. Jeanne Therese Hilario, a runner-up at the 1989 Maja International pageant, even earned a doctorate in environmental engineering from Cambridge.
The lesson has always been that there is a way out for everyone, says Prof Capili. This is why a beauty queen in the Philippines is revered as exactly that: a queen.

Revered for life
“Once you’re a beauty queen, you will always be remembered as a beauty queen, even when you’re already old, here in the Philippines. You keep the title for life, the prestige for life,” says Rodgil Flores, who runs a “boot camp” for those aspiring to put on a sash and tiara.
That is enough to motivate thousands of women to join pageants, despite the condescension heaped on by liberals and the lustful looks of onlookers.
In each of the Philippines’ 40,000 grassroots districts known as “barangays”, a beauty contest is held each year, mostly on some hastily built stage in a crowded street or alley, to mark the high point of a fiesta celebrating some obscure saint.
There are pageants for everyone: straight and gay men and women; transgenders, transsexuals and cross-dressers; little girls and boys; and housewives and grandmothers. They compete for a bevy of titles.
Marketing consultant Denise Sangalang was only 16 when she joined her school’s beauty pageant.
Now 21, she remembers being onstage, ogled by hundreds of pubescent boys. She recalls feeling uncomfortable.
“I did feel that. They had their eyes on me whenever I was the one walking on stage,” she says.
What got her through being objectified was to imagine the audience as objects as well.
“I pictured everyone as a cheeseburger,” she says, “as [it is] something that makes me smile.”