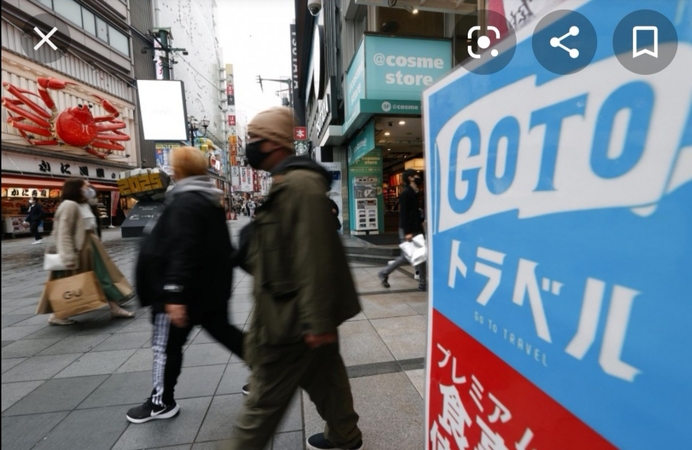 Prime Minister Yoshihide Suga has called on people in Osaka and Sapporo to refrain from travel outside the cities, where novel coronavirus cases are rising. Trips to the two cities had already been excluded from the Go To Travel campaign in a revision of the government's tourism promotion program.

The government is aiming to curb the spread of infections through the suspension and call for restraint.

"I'll immediately call on people to refrain from using [the program]," Suga said at a meeting of a government task force on the coronavirus at the Prime Minister's Office on Friday, referring to travel from the cities.

"A measure will be taken to prevent campaign users, hotels and inns from shouldering the cancellation fees," he said, indicating the government will be offering compensation.

In response to the government's move, Osaka Gov. Hirofumi Yoshimura on Friday said: "I ask the residents of Osaka City for restraint. I want to prevent the spread of infections in cooperation with the central government."

Hokkaido Gov. Naomichi Suzuki released a statement on Friday night, saying, "I will call on Sapporo residents to refrain from travel under the Go To Travel campaign if the risk of infection cannot be avoided."

If the governors of other prefectures where infection cases are increasing consider suspending the campaign and calling for restraint, the central government intends to consult with them individually to respond to the situation.

The nation's coronavirus response has been notable for the dissonance between the economy-focused government and the subcommittee on coronavirus measures, which is increasingly concerned about the spread of infections.

The government has apparently been forced to make minor changes to the Go To Travel campaign at the insistence of the subcommittee.

Suga had been cautious about reviewing the travel program with a view to prioritizing economic recovery, but he has now made successive changes.

The initial review, which included restrictions on travel destinations, was prompted by a subcommittee of experts who recommended on Nov. 20 that the government urgently consider excluding infected areas from the program. The government hastily held a task force meeting on the following day and decided to revise the program.

However, some members of the subcommittee voiced frustration as the government's move was limited to restrictions on destinations.

"It's halfhearted," one subcommittee member said. "A sense of urgency hasn't been conveyed to the government."

After the government announced Tuesday that travel to Sapporo and Osaka would be excluded from the campaign, the subcommittee urged it the next day to also suspend benefits for travel from the cities.

Shigeru Omi, who chairs the subcommittee, expressed his view that the central and local governments should strengthen their coronavirus measures. "We're past the stage of relying solely on individual effort," Omi said at a meeting of the House of Representatives' Committee on Health, Labor and Welfare.

However, the government has taken a stance that a causal relationship between the travel campaign and the spread of infections has not been established as the total number of travelers under the campaign who were infected with the virus stood at just 202 as of Thursday.

The prime minister appears to want to keep revisions to the program to a minimum. The subcommittee's call to restrict travel from the cities has ruffled feathers at the Prime Minister's Office, with a senior government official saying: "It's a selfish opinion. They [members of the subcommittee] have gone beyond their authority."

However, another senior government official said, "It would be best if we didn't have to take action, but we can't ignore the opinions of the subcommittee."

The government stopped short of excluding travel from the cities from the program and has only asked for people to refrain from travel, apparently because the government decided it was not a good idea to fully accept the opinions of the subcommittee.

Yasutoshi Nishimura, the minister in charge of economic revitalization who serves as a bridge between the government and the subcommittee, has come under pressure.

"The government is making moves every time it is pressured by the subcommittee," a government source said.

As many prefectural governors have praised the economic effects of the Go To Travel campaign, the central government intends to continue the campaign while working together with them.