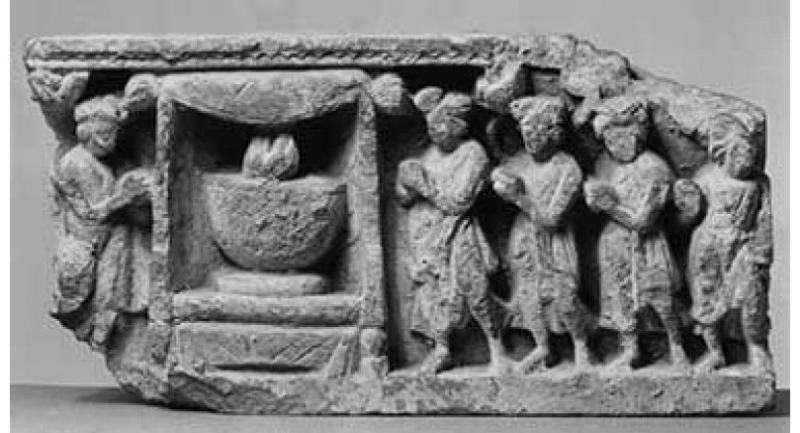 The fate of the Buddha’s begging bowl

One of the most revered relics in the ancient Buddhist world was the Buddha’s begging bowl.

A rough outline of its long convoluted history is this – it was supposedly given to the people of Vesali by the Buddha when he passed through the city on his way to Kusinara. In the 1st/2nd century King Kanishka took it to Pushapura, now Peshawar, where a string of Chinese pilgrims reported seeing it between the 3rd and the 9th centuries. The importance of the bowl is attested by numerous depictions of it in Gandhara art, usually shown on the pedestal of Buddha statues. During the Islamic period it was taken from one palace or mosque to another until at a date unknown it ended up in Sultan Way’s Baba’s shrine on the outskirts of Kandahar Afghanistan. Several British officers report seeing it there in the 19th century, one attempting to translate the inscription on it, and another, Alexander Cunningham, trying to trace its history, a fact I mention in my Middle Land Middle Way (1992, p.136). In the late 1980s during Afghanistan’s civil war President Najibullah had the bowl taken to Kabul’s National Museum. When the Taliban came to power, their Minister of Culture ordered all Buddhist artefacts in the museum smashed although the bowl remained undamaged, no doubt because of the Quranic verses inscribed on its outer surface. Today it can still be seen in the museum.

The bowl is not small. It is a stone hemispherical vessel of greenish-grey granite with a diameter of about 1.75 meters, a height of about three ¾ of a meter, and a thickness of about 18 cm at its rim, rather thicker elsewhere particularly at its middle and the base. It has no cracks or abrasions, except for a portion about the size of the palm of one’s hand that has flaked away from near the rim. There is a delicate lotus petal design chiselled around its base, attesting to its Buddhist past, and inscribed in beautiful large calligraphic script horizontally along the rim of the bowl, are six rows of verses from the Quran, reflecting its Islamic continuum and its status through the ages as an object of special religious interest. Traces of similar calligraphic script are visible on the surface on the inner side of the bowl. The bowl is about 350 to 400 kg in weigh, far too heavy to lift.

This bowl was probably an early larger copy of the Buddha’s actual bowl placed in a monastery in Vesali for people to offer their first fruits in, a custom common in ancient India and which survived even in Sri Lanka and elsewhere up to the 19th century. The bowl’s great size may well have encouraged the acceptance of the widespread belief amongst ancient Buddhists that the Buddha was 18 feet tall. Only someone that big could have used or even lifted a bowl this size.

It is interesting to keep in mind that Sri Lanka claimed to have the Buddha’s begging bowl, although any legend of how it got to the island has not been preserved. This Sri Lankan relic is mentioned several times in the Culavamsa as being as precious and holy as the Tooth Relic. The chronical tells us for instance, that when King Manabharana moved from Rohana to Polonnaruva he brought the Tooth Relic and the Bowl Relic with him. It also gives us a description of an elaborate ceremony during the reign of Parakramabahu I in which the two relics were drawn through the streets of the capital in a wheeled pavilion made of gold. Sometime after the fall of Polonnaruva the Bowl Relic disappeared and was forgotten

The Minister Prenteet Kaur in reply answered; "The Embassy of India, Kabul has made enquiries in the matter. It is learnt that the item purported to be Lord Buddha’s begging bowl was apparently in Kandahar until the regime of former President Najibullah. It was later brought to Kabul and is currently in the Kabul Museum. It has been pointed out that the begging bowl, a photo of which our Embassy has obtained, is rather large, besides having inscription in Arabic and Persian, thus calling into question its provenance. The Archaeological Survey of India has been requested to convey any information or advice it may have regarding the provenance of the bowl currently in Kabul Museum."