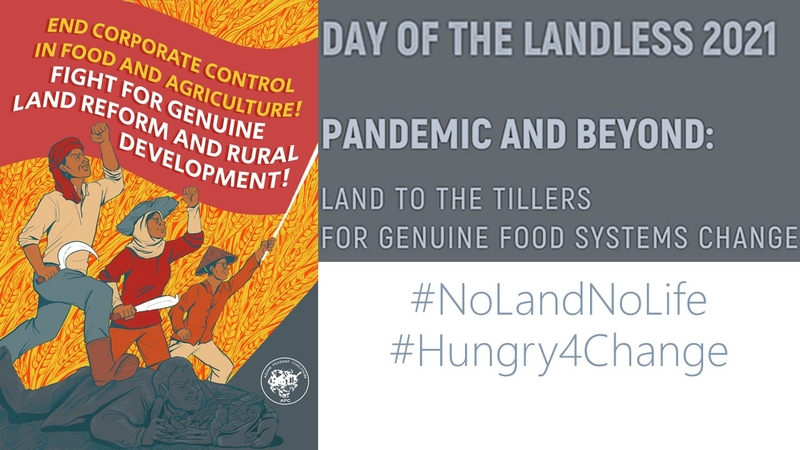 Today (March 29) marks the Day of the Landless, inaugurated by the Asian Peasant Coalition to spotlight the struggle for land rights by rural people in countries around the world.

Landless farmer groups from around Asia joined a summit ahead of the Day of the Landless in a bid to strengthen their push for land rights and reforms.

The theme this year – "Land of the Landless: Land to the Tillers" – recalls the words of Mahatma Gandhi: "In reality, the toiler is the owner of what he produces. If the toilers intelligently combine, they will become an irresistible power."

Indian independence leader Ram Manohar Lohia echoed that point: "The most exploited element in Indian society is the landless village labourers and farmers," said Lohia, adding that the freedom struggle in India could not be completed until the prosperity of the humble kisan (farmer) became a reality.

In 1949, two years after India gained independence, Lohia said reconstruction of the country was primarily a question of the reconstruction of her 550,000 of villages. Like Gandhi, he wanted a village-based democracy in India. Each village should be a zone of peace where land should be given to the impoverished residents who actually tilled the soil, and even landless labourers would secure rehabilitation and social justice. Lohia exposed the bitter truth of so-called urban “development” when he said the government had sacrificed Indian villages for the benefit of cities. Village dwellers were exploited economically and culturally. In Lohia's scheme of agrarian revolution, those who till the land must also own it.

Land still does not belong to the tillers

More than eight decades after India won independence, Gandhi and Lohia’s words speak louder than ever: most land still does not belong to the tiller. Far from securing the land for tillers, the “development” model India is chasing puts many at risk of losing it. Under the policies of globalisation, privatisation and liberalisation implemented since the early 1990s, even landholder farmers are becoming landless, said Harinder Singh Manshahia, a farmers' leader and Punjab state president of the Socialist Party (India).

For the Day of the Landless 2021, the Asian Peasant Coalition (APC) has joined with regional farmers to call for an end to corporate control of food and agriculture.

They called for strengthening of the battle for genuine land reform and rural development to truly transform the world's food systems.

"On the Day of the Landless, we – farmers and peasants, poor farmhands, agricultural workers, contract farmers, Dalits, rural women and youth, and land reform advocates across Asia – vow to further our resolve in fighting against landlessness,” said Raja Mujeeb, a member of the Pakistan Kisan Mazdoor Tahreek farmers’ alliance.

“Landlessness breeds social injustice, hunger and impoverishment. Landlessness is a bane to farmers and all the people of the world," he added.

Sandeep Pandey, Ramon Magsaysay Awardee and vice president of the Socialist Party (India), said: "It is unacceptable that farmers and food producers who feed our nations do not have access to land and are food insecure because of land and resource grabs, and of corporate capture of agricultural production and trade."

Why hunger when farmers grow more than we need?

The Covid-19 pandemic that ravaged the world in 2020 further exposed the profit-oriented nature of global food systems as it drove millions of people into chronic hunger. By the end of 2019, at least 690 million people went hungry. By the start of 2020, hundreds of millions of people continued to suffer acute food insecurity as they faced conflict, climate change, and economic crises of epic proportions.

A staggering 7 million people died of hunger last year as of October 2020. Pandemic-related hunger also led to the deaths of 10,000 more children each month over the first year of the health crisis. Forecasts even warned about multiple famines in the coming months as the lowest-income households are most likely to face increased hunger. Strict lockdown policies and quarantines have affected all stages of food supply, resulting in a steep rise in food prices and widespread food insecurity.

APC leaders said that hunger and poverty of Asian peasants and sectors in agriculture are among the direct results of centuries-old landlessness. Large-scale land deals and acquisitions (land grabs led by corporations) have dispossessed and displaced farmers from the plots they till. Millions of hectares of land planted with staples, grains and other food crops, as well as indigenous lands, and public lands were grabbed and converted into plantations, extractive mining projects, and farms devoted to export cash crops. Governments have become willing accomplices in these land grabs through public-private partnerships that take away land, water, and other natural resources from the people. Profits keep pouring into the pockets of the few as the majority of peasants and their families endure worsening landlessness and land grabs amid a pandemic. Farmers who assert land rights are faced with attacks from local landlords, big corporations and even government agencies. Peasant killings and other forms of brutalities against farmers happen on a daily basis.

In Asia, the largest protests we have seen in recent months are by Indian farmers, taking to the streets in hundreds of millions to oppose neoliberal agricultural laws that will make them more vulnerable to a few powerful corporations.

The APC warns that "ongoing efforts to address the rising global hunger and poverty through the upcoming UN Food Systems Summit will only end up in legitimising and further advancing tighter imperialist control over food and agriculture".

At the summit, the APC called for just, equitable, healthy, and sustainable food systems that would bring to the fore the peasant’s aspirations and struggles for land and genuine agrarian reform.

Cathy Estavillo, chairperson of Amihan women peasant federation (Philippines) and vice chair of APC; Ravindra, landless person from Hardoi in UP, India; and Anil Mishra, a farmer from Uttar Pradesh, India and president of the Socialist Kisan Sabha also addressed the summit under the unifying call that “Land Must Belong to the Tillers”.