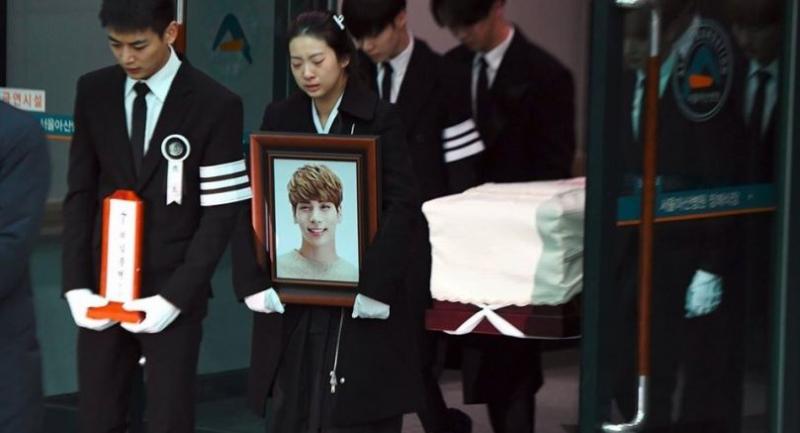 Star’s suicide unveils dark side of the K-pop dream

Known for its ultra-competitive, pressure-cooker society, South Korea has one of the world’s highest suicide rates. And this week the even higher stresses in the country’s lucrative showbiz industry took their toll on a K-pop superstar.
Kim Jong-hyun, a 27-year-old lead singer of the hugely popular boy band SHINee, took his own life in a Seoul hotel room on Monday, with his death sending shockwaves through fans around the world.
Five-member SHINee were at the forefront of the Korean Wave that has seen South Korean pop culture sweep Asia by storm in the past decade and lap at shores even further afield.
The band has found fame and fortune with multiple chart-topping albums and sold-out concerts at home and abroad since their debut in 2008.
But a grittier reality lies beneath the glitz and glamour of the K-pop scene – cutthroat competition, a lack of privacy, online bullying and relentless public pressure to maintain a wholesome image at all times and at any cost.
Many stars like Kim are picked up by agencies at a young age, usually in their early or mid teens, their lives then taken over by gruelling singing and dancing training, with the ever-present risk of falling foul of a cut-throat screening process.
Holidays are rare and privacy an unaffordable luxury as many live with other band mates in dorm-like apartments provided by their agents, who dictate everything from music styles and diet regimen to mobile phone use – and normally impose dating bans.
Many struggle with a constant lack of sleep and privacy.
Kim Se-jeong, a popular K-pop singer, confessed she once slept a total of one hour for four days. “I had to perform on stage, appear in TV shows and shoot ad commercials all at the same time,” she told a television interviewer earlier this year.
Kang Daniel, of the popular boy band Wanna One, admitted that his biggest wish was “having just one day of rest”.
“For months ahead of my debut, I usually woke up four or five in the morning... practised until two or three in the morning the following day,” Kang said in an August television interview.
He was “grateful” to get a chance at fame, he added – but the gruelling schedule eventually affected his health and the 21-year-old cancelled all public appearances earlier this month.

Smiley happy face
Many K-pop stars face tremendous pressure to look and behave perfectly in an industry powered by so-called “fandoms” – groups of well-organised admirers who spend enormous amounts of time and money to help their favoured stars climb up the charts and attack their perceived rivals.
In return, the stars are expected to tread carefully in an industry where today’s most-fervent fans can be tomorrow’s most vicious critics if their idols fail to meet their expectations – or “betray” them.
Drug use or drunken driving are seen as career-breakers, while behaviour that causes a “stir” – anything from a social media gaffe to a failure to smile ceaselessly at public appearances – can be criticised for years.
Many are constantly chased by paparazzi and camera-touting fans who share or sell every single detail and image of the stars’ daily lives online for public scrutiny.
“These ‘idols’ virtually live in a fishbowl and are pressed to put on a smiley, happy face while behaving nicely 24/7,” says cultural commentator Kim Seong-soo, adding the strain can “cripple them emotionally”.
Such challenges are common to celebrities around the world, he says, but are amplified in the hyper-wired South, which has some of the world’s fastest Internet speeds, highest smartphone usage and a society where pressure to conform is high.
Taboos about mental illness dissuade many from seeking medical help, including public figures, he adds.

Winner takes all
Kim’s death is unusual for a K-pop musician at the height of his popularity, but is the latest in a long list of showbiz suicides.
In 2010, Park Yong-Ha, a top actor who had huge followings at home and in Japan and China, hanged himself, and former actor Kim Sung-min, whose career was ruined by a jail term for drug abuse, did the same last year.
In the most shocking series of suicides, actress Choi Jin-Sil – a household name – hanged herself in 2008, her actions blamed on online bullying.
Her brother, also an actor, killed himself two years later, and her
ex-husband, former baseball star Cho Sung-min, followed suit in 2013.
Actress Park Jin-hee interviewed hundreds of actors and actresses for her master’s thesis in 2009 and said that 40 per cent had considered suicide at least once due to a lack of privacy, online bullying or unstable incomes.
But celebrity suicides are only a microcosm of South Korea’s wider social problems, including cutthroat competition in areas from education to workplaces and a lack of safety nets, says commentator Kim, calling depression an “inevitable outcome” of living under such strain.
“Our country has an extreme form of winner-take-all system where those who fail can hardly make a comeback, or even survive.”