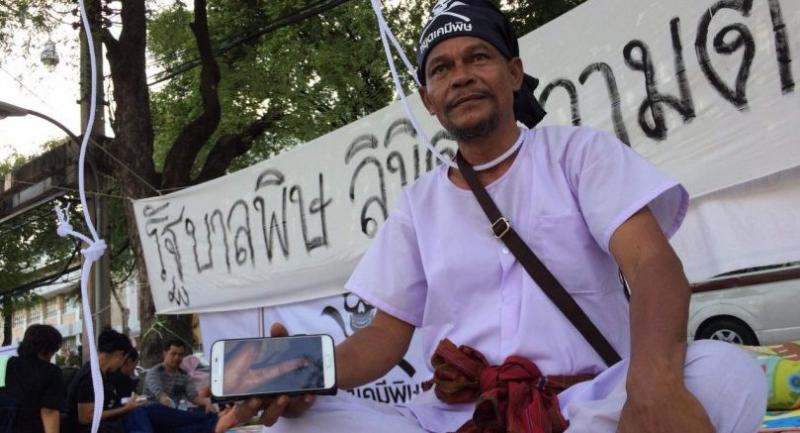 SPECIAL REPORT: The fight to keep toxic farm chemicals off our plates

AMNART KETKHAO moved back home from Bangkok six years ago to start a new life as an organic farmer in Phatthalung province in the South only to discover that the area surrounding his 20-rai plot of rice fields and those of his organic farmer neighbours were being heavily sprayed with farm chemicals, including the controversial paraquat that is used by many farmers to help get rid of grass before growing rice.

And when water from those fields flowed out and flooded adjacent organic fields including his, last year, Amnart’s right hand became infected and his condition worsened after long and repeated exposure to water. A similar condition developed among many other farmers in Nongbua Lamphu, with the cause diagnosed last year by the Public Health Ministry as exposure to bacteria found in highly contaminated paraquat water sources.
The correlation remains unknown but the ministry concluded at a meeting early this year that paraquat was causing negative health effects both to direct users and to those exposed via a contaminated environment.
It took almost five months before 51-year-old Amnart’s hand recovered, and when the government decided not to ban paraquat or the pesticide chlorpyrifos, or to place restrictions on the herbicide glyphosate, he decided to join other farmers travelling to Bangkok to protest.
“I hang myself like this to demonstrate that the government, by not banning these three evil chemicals, is handing death to us instead of protecting us,” said Amnart, with a rope around his neck as he camped out in front of the Agriculture and Cooperatives Ministry to demand the government commit to banning the chemicals.

History of farm chemicals
As a long-time organic farming advocate, Witoon Lianchamroon has seen Thailand being led down the farm-chemicals path. A director of BioThai, a think-tank organisation campaigning for sustainable agriculture and food security, Witoon recounts the rapid introduction of the chemicals in the mid-1960s.
Thailand joined with other nations in the “Green Revolution” under which farm technology, including farm chemicals, were introduced for mass cropping. Thai farmers at that time changed their rice-growing style, shifting |from growing a single rice crop yearly and relying on water to help get rid of grass, to continuous rice growing with chemicals helping control grass and weeds.
With year-round planting, the rice fields lost their previous fallow period and diseases began to spread – and the |more they spread the more the pesticides that were sprayed on the rice fields.

After rice, chemicals then were introduced in growing other crops on a mass scale, prompting them to also join the spiral. Witoon points to studies documenting the increasing shift to herbicides, with their imports now exceeding that of pesticides by a ratio of 4 to 1.

Herbicides are in critically high demand because they are also needed in the highlands, where ploughing is almost impossible, as it would exacerbate soil erosion.  Cornfields in the highlands, for example, are found to rely greatly on herbicides, which are increasingly being used while causing a lot of side-effects downstream.
These chemicals are usually imported from global agro firms, and recent years have seen an increasing trend towards business mergers, which result in further centralisation of the farm-chemical industry worldwide by mega-corporations, said Witoon.  When patents on the chemicals expired, their production ramped up in major developing countries like China and India.
They were exported to other developing countries like Thailand, where farming remains a critical part of the economy.
So far, around 400 farm chemicals have been registered, 200 of which have been imported for use in the country. Paraquat and glyphosate account for around 30 per cent of the total volume of farm chemicals imported in recent years, while chlorpyrifos is among the top pesticides used by Thai farmers, according to BioThai.

Farm chemical regulation and flaws
These chemicals were required only to be registered before being imported into the country under the now-defunct Toxic Substance Act. The system to regulate and control these chemicals changed with the 1992 introduction of the Hazardous Substance Act, under which |hazardous substances were |classified for different degrees of controls.
The first two groups of chemicals, classified as type one and type two, are normally not hazardous and require only notification on their import. The third group covers chemical substances considered hazardous, and requires that they be registered before being imported.  The last group is chemicals that need to be banned.
Banning is done through the Hazardous Substances Committee, comprising 29 members drawn from concerned government agencies as well as experts and several people suspected to have ties with the industry.
They consider proposals from concerned agencies, including the Public Health Ministry, as well as from the Agriculture and Cooperatives Ministry.
“The ban on farm chemicals involves the process where the chemicals are classified in the fourth group under the Act, and to do so it needs to pass the committee’s consideration – and that’s the reason why this committee is powerful,” explained Witoon. “It is a crucial mechanism to determine which chemicals should or should not be banned.”Since his organisation BioThai earnestly pushed to ban some farm chemicals in 2009, it has learned more about structural problems in the regulation and control of farm chemicals in the country.
BioThai at that time noticed that some countries, including the United States, had banned some farm chemicals, but their registration, which normally last six years, was instead renewed here. When they sought information submitted by the companies to back up registration of their chemicals, BioThai was told the documentation was classified and not open to the public.
As BioThai began to question the transparency of the process, more and more information about the impact on public health from these chemicals flooded the organisation.
During its campaign to ban four farm chemicals, BioThai learned that there had been efforts to change the composition of the Hazardous Substance Committee to recruit more experts.  Some committee were found to be representatives of agro organisations supporting the use of chemicals, and alleged to have close links to farm chemical companies. That prompted the organisation to decide to push for a ban on two chemicals rather than four.
But they also realised they needed to address the committee’s structural problems.
“As our work became in-depth, it was not only a push for a ban on harmful chemicals any more, it was also about flawed policies and structural problems in regard to the issue that needed to be addressed, and we have since worked on both levels,” said Witoon.

BioThai has joined with some prominent universities to regularly examine residues of farm chemicals in the market and in the environment and to release their findings to the public.
The organisation last year sent samples to overseas labs, which found that almost half of the samples of vegetables and fruits had been contaminated by chemicals, with the |rate exceeding the international standard.
The results were submitted to the Public Health Ministry, which later held a consultation meeting with a group of experts before resolving to ban the three chemicals – paraquat, glyphosate and chlorpyrifos.
Witoon argues that about 100 chemicals ought to be banned, but the three were selected because of their acute toxicity and their chronic and hazardous effects on health, especially in regard to causing cancer and mutations.
Witoon’s claim has been backed up by the release of recent study results by a group of professors and researchers in the medical and environmental fields from leading universities, which jointly called for banning the chemicals.
The Hazardous Substance Committee in late May, however, rejected a ban for any of the three chemicals, citing insufficient information to justify a ban.

Hopes
BioThai and their allies responded to the committee’s decision by calling for a government response and for a panel to be set up to review the decision. While they await a government response, the groups and experts continue to push for changes at a policy level.
They have drafted a model law to line up surveillance and control of chemicals on the ground and in the market, including related advertisements and trademarks.  The bill would also shift authority to decide a ban on farm chemicals to authorities working in public health, said Witoon.
He believes an improvement would follow passage of the draft law, as it would trigger changes from the farmland to the policy creators. Last but not least, he said public awareness needed to reach a new awareness so people could better protect themselves from these harmful chemicals.
“This issue needs a lot of awareness to overcome the problems and hindrances that we have, not just among advocates and experts, but also of the general public.
What we need to push together is a joint awareness that these chemicals are harmful to us all. It takes time and it needs patience,” said Witoon.