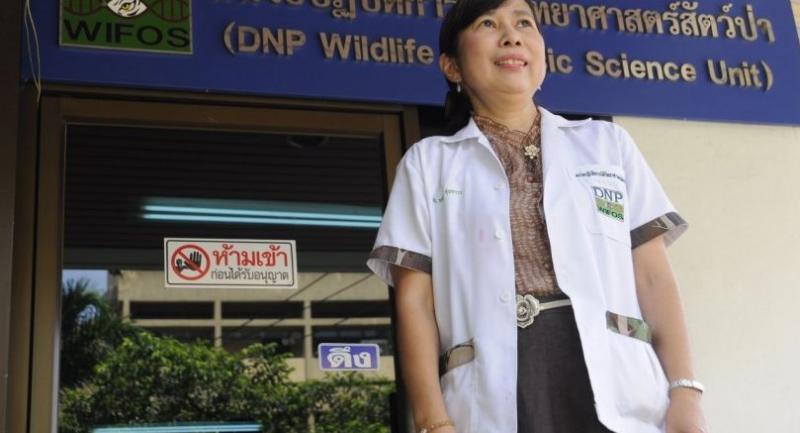 Young wildlife researcher Kanita Ouitavon was shocked when she first saw the number of animal species, many unknown to her, that were up for sale at a local market in the North some years ago, when she had just joined the National Parks Department (DNP).

“Depressing and distressing” were the words that came to Kanita’s mind that day, as she realised that poaching was part of tradition and people’s livelihoods, and that wildlife consumption was part of their everyday lives.

“It’s something that has stuck in my mind since, and I’ve always wanted to help in anyway I can,” Kanita said as she recalled realising on that day long ago that gaps in law enforcement had to be filled in to nail down poachers and save wildlife.

Understanding that the undeniable truth was hidden in DNA, Kanita decided to pursue her Doctorate degree in Molecular Biology at Kasetsart University, where she had earned her Bachelor’s and Master’s degrees in Forestry. She earned the Doctorate before returning to the department, where she pushed to create the country’s first wildlife forensic science unit with the support of her ex-chief at the Wildlife Conservation Office, Chatchawan Pitdamkham.

The most notable case in recent years,  the alleged poaching of a black leopard in Thung Yai that has drawn attention to wildlife forensics again. Photos courtesy of Phaya Sua taskforce.

Thailand was hardly aware of wildlife forensics until a team of forensic police, led by former commissioner of the Office of Police Forensic Science and adviser to Royal Thai Police, Pol General Jarumporn Suramanee, investigated the gruesome killing of two elephants in Kaeng Krachan National Park between 2010 and 2012. There, the team applied the knowledge of forensic science to solve the case and catch the poachers.

Forensic science is applied to both human and wildlife killings following the same principles and work approach, said Jarumporn, who was appointed to a special panel by the Natural Resources and Environment Ministry to help in the high-profile case of a black leopard killing earlier this year.

Establishing a crime scene as the entry point, examining “all related evidence” is the next step in the process of discovering who committed the crime. Jarumporn explained that “forensic evidence” helps tell the tale of what and how the crime happened, or “modus operandi” (method of operation). This will then lead to the motives behind the actions and to the culprits, Jarumporn added.

A crucial part of forensic work is DNA. DNA “cannot be wrong”, especially since brutally killed animals cannot speak for themselves and often come in pieces. Hence, DNA checks are increasingly being relied on to help resolve wildlife crimes.

Investigators and park rangers tried to locate evidence in the binturong killing case in Sai Yok on the very first days of the arrest.

It was on a month-long training programme by the UK-based Trace Wildlife Forensics Network that Kanita realised how critical DNA examination of wildlife forensics would be to resolving wildlife crimes.

Forensics, she explained, comes from the Latin word, forensis, which means “discuss” or “debate”. As applied to court procedures, the process involves finding facts and evidence to support their arguments in court.

Forensic science used to help resolve court cases, or “forensics”, refers to applying any known science to find or confirm facts in evidence, or what Kanita calls, “the answers”, to the point that the court can be convinced to accept them and proceed with legal action.

In other countries, wildlife forensics has been further developed thanks to the success some three decades ago in developing the polymerase chain reaction (PCR) – a laboratory technique to multiply DNA strands to identify or find certain DNA, according to Kanita.

The introduction of PCR and DNA Sequencing technologies have led to a leapfrogging in knowledge and has been extensively applied to other fields, including wildlife forensics.

“DNA is something tremendously specific and therefore cannot be wrong. Unlike normal research, they are not just samples, but ‘evidence’ and with their straightforwardness they are accepted by the court,” Kanita explained.

While some university labs take samples for testing upon request, a small two-container lab initiated by Kanita has become focused on the work, and over time has helped tackle wildlife crimes in line with the department’s law-enforcement mission.

Since its opening around eight years ago, the DNP’s Wildlife Forensic Science Unit (DNP-WIFOS) laboratory, which Kanita heads, has so far taken nearly 4,800 pieces of evidence from 285 cases.

Starting with small cases related to the hunting of wild animals such as barking deer, the lab has taken on evidence of increasingly serious cases ranging from trafficking of African ivory to the recent high profile case of black-leopard poaching in Thung Yai Naresuan Wildlife Sanctuary. That case involves construction tycoon Premchai Karnasuta, the Italian-Thai Development Plc president. The latest case involves the killing of a bearcat in Sai Yok National Park, in which the deputy district chief of Makham Tia district in Kanchanaburi province is a suspect.

Unlike human forensics, which focuses on the single species of Homo Sapiens, wildlife forensics work on a number of species that can be found worldwide, and so Kanita sees this as a “different challenge” for her lab.

In the tiny space where chemical and biological elements as well as other laboratory tools are deployed to help reveal the truth hidden in the DNA, the nine members of DNP-WIFOS lab are busy decoding DNA hidden in items that range from blood stains to the butchered flesh of wild animals.

Kanita said her team of scientists try to answer two key questions to resolve wildlife crimes. First, they need to discover from blood and flesh samples what kind of the animals they were. Second, whether the animals are protected species. It’s species identification using the DNA Sequencing method.

Answering such seemingly simple questions can help confirm whether the animals had fallen victim in the forest, Kanita said.

In the more complicated cases such as the black leopard or the binturong (bearcat) cases, Kanita’s team needs to go on to learn whether or not the scattered pieces of flesh, or the blood stains, found at the scenes belonged to the same animals. This is the process of individual identification using DNA fragment analysis, which can also be applied to the cases, under which relationships of the animals are needed to be established, or the process of parentage testing.

Such established facts help nail down the culprits, regardless of what they claim the animals were, the DNA will accurately determine the truth. The dead animal cannot be something other than what the DNA says, Kanita explained, adding that the findings lack bias and are straightforward due to the nature of the work and the DNA.

Park officials during the search for evidence in the binturong case.

The chain of custody

Since evidence collected from crime scenes is critical to court cases, the process of collecting evidence at the scene is also a critical part of the success of their work.

A “chain of custody”, the protection of evidence concerning wildlife parts from the origins to the destination at her lab, has been introduced with new procedures being developed and applied to cases.

In the lab, the chain of custody has also been applied.

All these precautions ensure that the evidence collected from the crimes scenes is truely original, and that the original evidence is not lost or swapped along the way.

Records of evidence and actions, as well as the people involved, are produced. Combined with the results of the DNA testing, a case file will be produced to accompany the police reports to be submitted to the court.

Kanita’s work, however, is not finished yet.

In every court case her team works on, Kanita must go to court to testify. She cannot say how many times she has testified now, because the lab is constantly busy testing DNA from pieces of evidence sent them almost daily – around 800 a year on average.

Kanita just hopes the lab space and staff are expanded to keep up with the trend as wildlife crimes are still being committed despite the state suppression.

Park and wildlife rangers, she added, should get systematic training on the chain of custody so that they will be additionally equipped with the knowledge and are able to guard the evidence needed in the cases from the start, including evidence collection.

DNP-WIFOS lab has progressed during the past eight years with accumulation of experiences, and Thailand has recently been recognised along with Malyasia, Indonesia, and Vietnam at the Asia Wildlife Forensics Network Meeting as the country in the region where wildlife DNA forensic capacity exists or is developing.

The critical work that has earned it praise from other countries are the recent completion of the domestic elephant DNA database and the current efforts to create the national DNA database for captive tigers as Thailand is the only one country in the region that has managed to develop such the databases.

WIFOS lab's head, meanwhile, just hopes the very existence of the lab as a critical tool to help dig up the deepest truths, will help deter the ill intention of culprits.

“I just hope they will realise that it’s not easy to shoot a wild animal any more. At least we have the tool to trace them; with that at least they should think twice before committing a crime,” Kanita concluded.