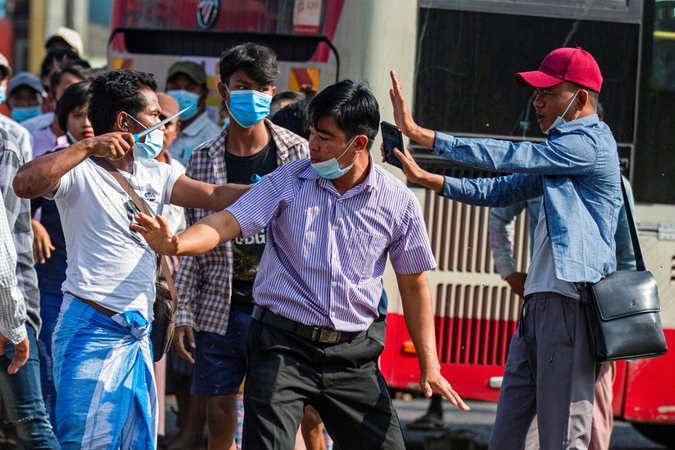 At the current rate, the crisis in Myanmar will have serious geopolitical and security implications, not only for the country itself but also for its Southeast Asian neighbors. An economically weak and politically unstable Myanmar makes it easy prey for China and the United States to wage their proxy battles.

This is bad news for ASEAN.

China’s nonchalant attitude towards the military coup in Myanmar raises speculations that it is ready to accept and recognize the junta as the legal representative government. At the most, Beijing has expressed concerns about the fate of its investment projects in Myanmar as some protesters opposing the military are venting anger at China’s business interests.

China’s attitude stands in sharp contrast to the reaction of most of the rest of the world, which has condemned the Tatmadaw, Myanmar’s armed forces, for the Feb. 1 coup that prevented the National League for Democracy (NLD) from assuming power after the party’s landslide electoral victory in November.

Widespread global condemnation has not stopped the Tatmadaw from killing peaceful protesters who have demonstrated in the streets of Yangon since the power grab. At least 150 people have died in military crackdowns. Calls for allowing peaceful protests and for the release of hundreds of protesters and NLD leaders, including Aung San Suu Kyi, have fallen on deaf ears.

With ASEAN powerless to stop the escalation and the United Nations Security Council paralyzed by great power political games, the opposition forces in Myanmar are inevitably turning to the West for help. But the US and other Western countries could, at best, impose economic sanctions, which, judging by the history of such sanctions, will have a limited impact.

Myanmar will soon become polarized in the hegemonic contest emerging in Asia. The country is ripe to be the next cold war arena, especially with tensions growing between China and the US.

Both powers have upped the ante, moving outside the original economic and trade domain to the COVID-19 pandemic and, inevitably, to a contest for power and influence in the Asia.

US President Joe Biden has formalized the Indo-Pacific Quad, an informal alliance founded in 2007 to counterweigh the rise of China consisting of the US, India, Japan and Australia. The Quad’s first summit was held by video conference last week. The alliance is matching China’s COVID-19 diplomacy with promises to supply vaccines to Asian countries. Quietly, Quad countries are inviting other Asian countries to join the anti-China group, calling it Quad-Plus.

Southeast Asia could once again become a theater for great power competition to expand spheres of influence. From the perspective of the contestants, if lives are lost along the way, they are nothing more than collateral damage.

This would unravel more than five decades of ASEAN’s hard work turning Southeast Asia into what we know today, a region relatively free of conflict that has allowed member countries to forge ahead with economic development and build prosperity for their people.

Pre-ASEAN Southeast Asia was full of conflict and wars between neighboring countries as they were pulled apart by competing superpowers. The Vietnam War was the largest, longest and probably the most remembered, but there were other big conflicts and tensions in the region in the 1960s, including the bloody confrontation between Indonesia and Malaysia. ASEAN diplomacy led to the signing of the Cambodian peace agreement in Paris in 1991.

It took the vision of the foreign ministers of Indonesia, Malaysia, Singapore and Thailand in 1967 to launch ASEAN with the goal of transforming Southeast Asia from a region of conflict to one of peace. And it took ASEAN another 30 years before the five other countries in the region joined: Brunei, Vietnam, Cambodia, Laos and Myanmar.

Much of today’s wealth and prosperity in Southeast Asian countries would have been impossible without ASEAN, albeit to differing extents. To the frustration of many, ASEAN could have moved faster in establishing its charter and becoming a community, which is now postponed to 2025.

The ASEAN achievement, after 53 years of work, could quickly crumble if the situation in Myanmar spins out of control and competing big powers take their battles to the region.

History shows that ASEAN countries cannot afford to sit on their laurels and watch the tragedy in Myanmar unfold.

Indonesia’s initial diplomatic efforts, putting together an ASEAN foreign ministers meeting, may have failed to make a dent, but this is not a reason to give up the effort. The endgame of Indonesian and ASEAN diplomacy is to help restore democracy, peace and stability in Myanmar for the sake of the country’s people and for the sake of all people in Southeast Asia.