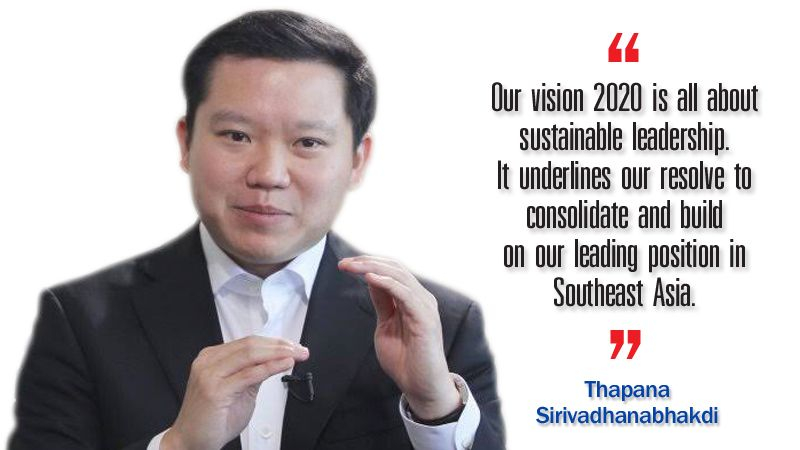 The tycoon’s group has invested more than Bt720.55 billion over the past 20 years at home and abroad to take giant strides in expanding its business empire.

As of the end of March 2019, seven companies of the group are already listed on stock markets in Thailand and overseas and one of them is in the process of seeking permission to raise funds from the capital market. They have generated total revenue of Bt235.66 billion. Five of them -- Thai Beverage Plc, Fraser and Neave Ltd, Univentures Plc, Golden Land Property Development Plc, and Fraser Property (Thailand) Plc -- have reported results for the first half of their fiscal year (October 2018 to March 2019) while Berli Jucker Plc, and Asset World Corporation Plc have reported results for the first quarter of this year.

The companies recorded net profit of Bt21.59 billion at the end of March, up 20 per cent from the same period of last year, at a time when the global and Thai economy are in the grip of a slowdown. 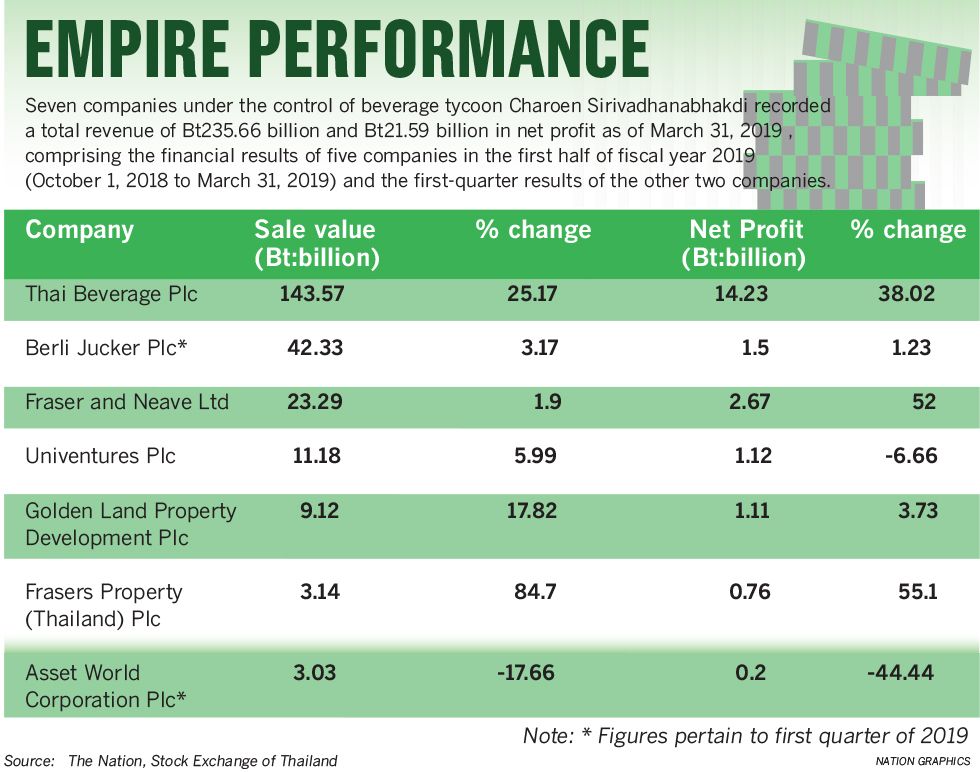 Charoen started his business in 1961 when he became the owner of a liquor firm where he was an employee. He then expanded the business to the beer industry and now the group covers alcoholic and non-alcoholic beverages, besides expanding into other industries like food, agriculture, retail and property sector under the second generation of his family led by Charoen’s sons Thapana Sirivadhanabhakdi, Pranote Sirivadhanabhakdi and his daughter Wallapa Traisorat. They are key forces behind driving the business with their ambition to become a leading business group in Asia.

“Our vision 2020 is all about sustainable leadership. It underlines our resolve to consolidate and build on our leading position in Southeast Asia,” Thapana said in 2014 about the group’s vision for 2020.

In pursuit of this vision, in the last five years Thai Beverage Group has expanded investments at home and overseas by taking over and acquiring several businesses to drive its target of double-digit income growth every year.

According to a survey by The Nation, from 1989 to 2019, the group invested more than Bt720.55 billion to take over and acquire 21 business in Thailand and overseas.

Its latest acquisition gives it control over 372 branches of Starbucks in Thailand.

King of beer in Asean

With aggressive investment in beverages since 1961, Thai Beverage Group has picked up a 24 per cent market share in the beer market in Asean after spending Bt160 billion to take over Saigon Beer Alcohol Beverage Corporation Co Ltd in Vietnam in 2016 when the total market consumption of beer in Asean was about 11,500 million litres a year.

The group now plans to build a beer plant in Myanmar after taking a major stake in Myanmar’s largest whisky firm  Grand Royal Group in 2016 for Bt25 billion.

The group has continued to expand its investments in the non-alcohol beverages and food industry and one of its boldest moves was to acquire Singapore’s largest beverage and food company, Fraser and Neave Ltd, in 2013 for Bt336 billion, the biggest overseas acquisition at that point by a Thai business.

The group also spent more than Bt11.3 billion to take a major stake in Yum Restaurant (Thailand) Co Ltd in 2017, which manages the chicken food franchise KFC with 240 branches in Thailand.

In addition, the group owns Oishi green tea and Oishi Restaurant after taking over the Oishi group in 2006.

Apart from the beverage and food industry, the group has continued to diversify into the property and hospitality industry through its subsidiary, TCC Land Group, now known as Asset World Corporation Plc. The company is managed by Charoen’s daughter Wallapa Traisorat who is the company president and chief executive officer.

Asset World Corporation Plc applied to the SEC on June 11 to raise capital from the stock market.

According to its filing to the SEC, the holding company has major stakes in hospitality, retail and commercial buildings, with registered capital of Bt32 billion, and paid-up capital of Bt24 billion. The company plans to raise capital from the market to repay loans and also for business expansion, including two hotels in Bangkok -- Holiday Inn Express Bangkok Sathorn, and Bangkok Marriott Hotel The Surawongse, and also the Phuket Marriott Resort & Spa Naiyang Beach and Hua Hin Marriott Resort & Spa. Another contract for eight hotels are being processed. Together, they have an estimated appraisal value of Bt8.71 billion.

Currently, Asset World Corporation Plc manages 5,000 hotel rooms in Thailand and overseas. The company expects to have 8,000 rooms by 2023. It also manages 342,000 square metres of retail space and 270,594 square metres of office building in Thailand.

The plan to raise capital from the Stock Exchange of Thailand will be a part of efforts to drive business growth in the long term, the company’s president and chief executive officer Wallapa said at a press conference recently.

The largest project developed by listed property firm Frasers Property (Thailand) Plc, one of the firms belonging to the group that changed its name from Ticon Industrial Connection Plc, is One Bangkok on Rama IV Road with investment valued at Bt120 billion. This group is also developing mixed-use projects from the Samyan area to Rama IV Road, worth more than Bt200 billion from 2018 until 2022.

This was a part of the group’s strategy to enter the retail industry.

During the 1997 economic crisis when Thailand and many other countries in Southeast Asia faced rough weather, Charoen lost his banking business -- First Bangkok City Bank -- as he had to use assets of about Bt10 billion to confront the financial crisis.

Twenty-two years later, Charoen and his empire have not only survived the crisis but emerged even stronger and bigger, as one of the biggest business groups in Asean with total assets in excess of a trillion baht.

“I learned from the crisis and have learned how to do business. I have also taught my sons and daughter how to do sustainable business in the long term,” Charoen had said earlier. 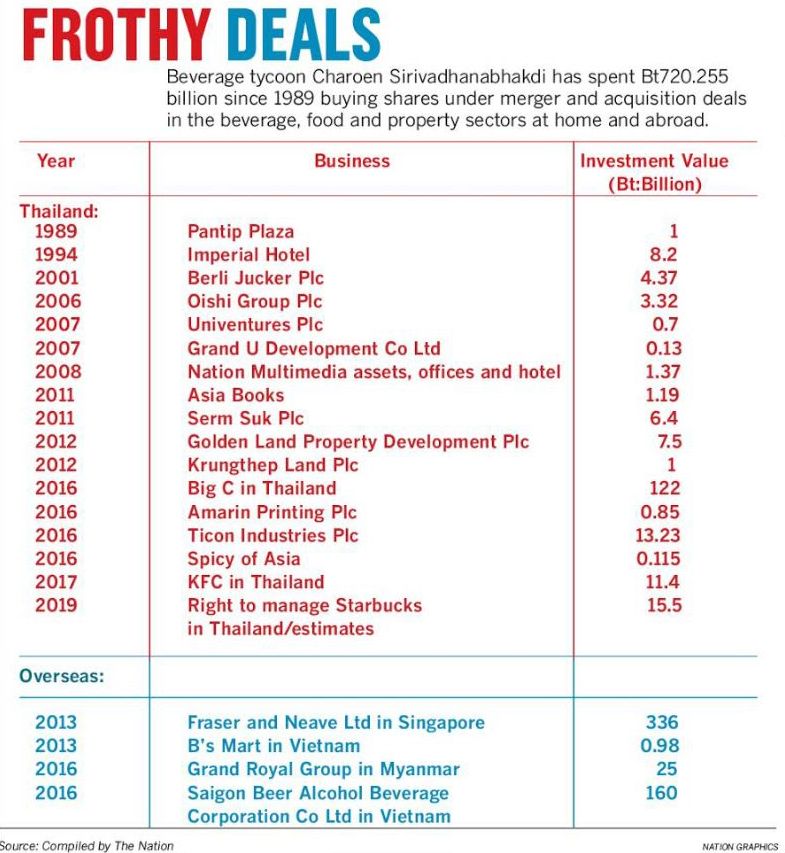