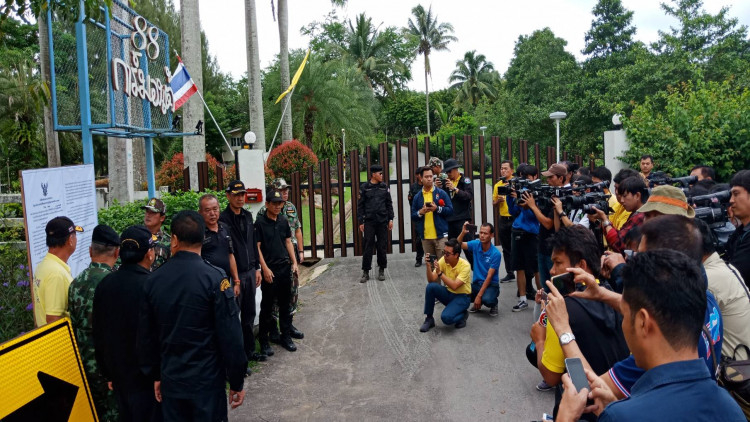 This demolition notification was posted in front of 88 Garmonte Resort on July 26, 2019.

Wang Nam Khieo Resort in Nakhon Ratchasima in Thailand’s northeast made the headlines of every newspaper in the country back in mid-2012, due to its central role in a scandalous case involving trespass on national forestland. The once world-renowned natural resort and tourist attraction became known as the trespasser on the prestigious Thap Lan National Park, shocking both local people and foreigners alike.

Since that day, the cases of forest trespassing in Thailand have multiplied, turning from a few into hundreds of examples in under a decade. Today, there are 491 cases of reported forest trespassing, 352 of which have allegedly occurred in national parks, making them the No 1 plaintiff under this offence category.

Prawattisat Janthep, the just-appointed head of Thap Lan National Park, has inherited the responsibility for ongoing trespassing lawsuits. He told The Nation that the national park still has many cases under investigation by prosecuting attorneys, reflecting a complicated problem that may need higher level policies in order to solve.

“When looking at these cases, my first thought is that they are messy. Some of the National Park’s areas are overlapping with lands assigned for agricultural uses by the Agricultural Land Reform Office (ALRO), resulting in local villagers still farming on national parklands without knowing that they are trespassing,” he said.

Further, Prawattisat explained, Wang Nam Khieo forests were announced as National Forest areas back in 1972, before it was later incorporated into Thap Lan National Park in 1981.

However, in 1978 the Agricultural Land Reform Office started assigning lands for agricultural use, giving them to poor farmers in Pakthongchai district – which later became a part of Wang Nam Khieo district. This caused years-long ambiguity and has resulted in the northern part of Thap Lan National Park overlapping lands assigned for agricultural use. It is estimated that the overlapping lands span 58,000 rai (9,280 hectares) across Wang Nam Khieo and Pakthongchai districts.

“Since the overlapping areas are also under the jurisdiction of ALRO, the national park will not itself file lawsuits against any trespassers, but rather let the ALRO know if there is any misuse of the land, such as for any purposes other than agriculture,” he said.

The southern part of Thap Lan National Park is also facing complications due to a Cabinet resolution of June 30, 1998, stating that citizens residing in forest areas will be allowed to remain there provided that they can prove that their residency began before the announcement of national forest area and that their presence poses no threats to the ecosystem of the forest.

If those residents used the land for purposes other than intended, it would be considered trespassing on a national park, under the resolution.

Since the process to prove historical residency is usually complicated and lengthy, National Park officials found that many pieces of their lands under investigation were bought and transferred around the same time that the Cabinet resolution was enforced. The buying and selling of these lands usually used a por.bor.tor.5 (a property tax return document) as proof of residency and ownership. As por.bor.tor.5 is essentially a receipt given to anyone who comes to pay land tax at local administration offices, brokers have used it in an attempt to buy national park lands for capitalists, politicians and former high-ranking officials to use for commercial gains.

“The buying process is not easy, however,” said Prawattisat. “They will first need a royal decree to revoke the land in question from National Park possession. This has resulted in several lawsuits and lengthy investigations that we are seeing right now.”

In the case of 88 Garmonte Resort, it is clear that there was an effort to revoke the national park’s possession of the land. “There was evidence stating that the resort’s land was allotted by ALRO back in 2016, which was clearly falsified as the land was located in Kaeng Din So National Forest, which is a different forest from Wang Nam Khieo forest that has overlapping jurisdiction with ARLO,” the national park head said.

“The lands that is being claimed as being allotted by ARLO has intruded into 8,000 rai of national park area. So far, we have filed 82 lawsuits against resorts, hotels and bungalows over trespassing charges,” Prawattisat said.

Last year, the national park sued 207 individuals on trespassing of its park areas. While most of the defendants agreed to remove their buildings from the areas, some sought help from the Administrative Court to issue a temporary protection, which essentially enabled them to continue their business operation.

“It is time for all related parties to talk and find the best solutions,” said Prawattisat. “Laws may contradict each another, but we need to determine the original intention of those laws and adjust them accordingly to eliminate any ambiguity, while maintaining the true essence of justice.”

Meanwhile, after assigning policies to Ministry staff, Minister of Natural Resources and Environment Varawut Silpa-archa said that the matter of Wang Nam Khieo was extremely delicate, and that he had already tasked related officials to discuss the applicable laws for this case.

“After several delays, the legal execution against 88 Garmonte Resort is now resuming as planned,” the Minister confirmed.