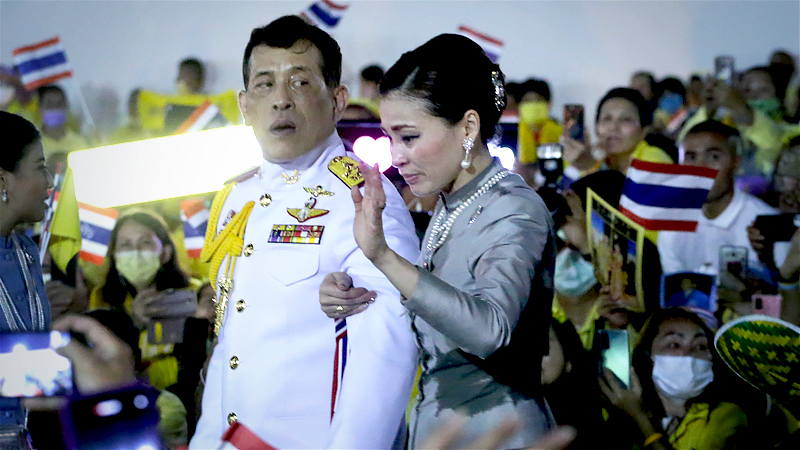 The King made the brief remarks to reporters from Britain's Channel 4 and CNN during a public appearance after the attire-changing ceremony at Wat Phra Si Rattana Satsadaram, or Temple of the Emerald Buddha, in Bangkok’s Phra Nakhon district.

Asked whether there was any room for compromise with protesters who were demanding curbs on his powers, the King said: "Thailand is the land of compromise."

The King was accompanied by HM Queen Suthida and his two daughters, HRH Princess Bajrakitiyabha Narendiradebayavadi and HRH Princess Sirivannavari Nariratana Rajakanya. The royals were greeted by over 12,000 people waiting on Na Phra Lan Road and Rajdamnoen Avenue, wearing yellow shirts and holding Thai national and the royal flags.

Princess Sirivannavari told CNN that Thailand is a peaceful country, saying, "We love the Thai people, no matter what."

These are the first remarks by the 68-year-old monarch to foreign media since 1979 when he was Crown Prince.

The CNN reporter stood close to a former monk, Phra Buddha Isara, a former leader of the yellow-shirt protesters who had shut down Bangkok, and which led to the military coup in 2014 that toppled the Yingluck Shinawatra administration. The reporter apparently expected the King to come over to greet Buddha Isara, and saw the chance of posing a question to the monarch, according to a report shared on social media.

Buddha Isara was defrocked due to criminal charges. He was also greeted by the King at a gathering on October 23, Chulalongkorn Day. The incident had sparked a controversy as many interpreted the King's action as taking sides with the royalists, contradicting the neutral role prescribed for the monarch in the Constitution.

On Sunday evening, Bin Bunluerit, an actor and well-known rescue volunteer, also joined the gathering. He was previously accused of having benefited from political involvement. He has denied the accusations against him.

Another controversial character facing criminal charges, Apirak Chat-arnon, also known as gambler Sai Po, was seen wearing a yellow shirt at Sunday’s gathering. The crowds cheered him to "fight..fight". He was recently granted bail in a case of attempted murder. He also faces a charge of possessing a weapon.

A group of yellow shirts with short hair also were spotted, thought to be soldiers and police.

A short VDO clip shared among netizens also showed one yellow-shirt man saying angrily that the conflict would not be solved until there was bloodshed and one lady said she was ready to die for the monarchy.

The ruling Palang Pracharath Party had earlier reportedly told its MPs to mobilise royalists to counter pro-democracy protesters who are demanding the government's resignation, a new constitution and reform of the monarchy.

In response to the remarks by the King about Thailand being "a land of compromise", pro-democracy supporters posted their comments on their Facebook pages.

National Artist Suchart Sawadsri posted that “in the land of compromise, there are 80 arrest warrants issued by police against pro-democracy leaders, and police will even arrest them in the hospital”. He was referring to three protest leaders in Praram 9 Hospital after Friday night’s chaos stemming from police delaying their release despite a court order.

Pavin Chachavalpongpun, an academic who has critical views about the monarchy and lives in exile in Japan, posted on his Facebook page, that the King’s statement "Thailand is a land of compromise" is contradicted by the gathering of hardcore political figures such as Buddha Isara and Warong Dechgitvigrom, an ultra-royalist and politician.

He predicted that the pro-democracy protesters and royalists would continue their protests.

Youth-led pro-democracy protesters have proposed a 10-point manifesto to reform the monarchy, which includes scrapping the lese majeste law, which is deemed a major source of human rights abuse. Local and international rights groups, including UN human rights experts, have demanded a release of protest leaders as they demonstrate peacefully and exercise their rights in line with the Constitution and international laws.

On Sunday Free Youth and other pro-democracy groups posted on their Facebook pages that they will not back off from pushing their demands.