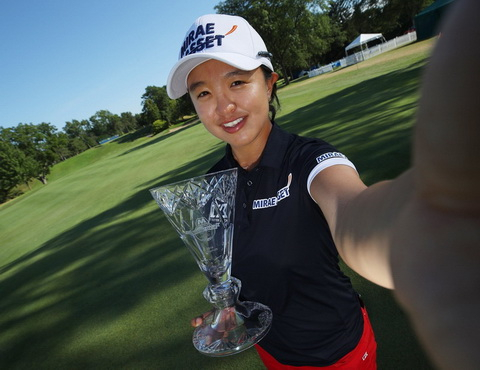 Large crowds came out to Highland Meadows Golf Club on Sunday in Sylvania, Ohio and Sei Young Kim did not disappoint them.

Kim had seven birdies and needed just 26 putts on Sunday to capture her ninth career LPGA title at 22-under par at the 2019 Marathon Classic presented by Dana.

“This feels great,” Kim said. “I really want another win, especially this week, because last two weeks I played really bad. I was like, ‘Oh, I really want to win some tournament.’ I did this week, and so happy with that.”

Kim fell just one stroke shy of the tournament record held by her idol Se Ri Pak, a five-time Marathon Classic champion, she said she didn’t know the record but she’s happy to have won the same tournament Pak did.

“I'm very honored my name alongside Se Ri Pak. Since I was young she is one of my idols. She's a great player. She won five times this tournament. Yeah, I got very big inspiration from that win.”

Lexi Thompson put pressure on Kim on the back nine with birdies on 10, 12 and 14, but despite closing with an eagle for the second straight day and posting a final round 5-under par it wasn’t enough for her 12th career win.

“She played some amazing golf today,” Thompson said of Kim. “I've played with her a lot just in my career, and she's an amazing talent. Showed today. She went through a stretch on the front nine or going into the back where she stuck every shot. Had under five feet about four times in a row, so it was a very well deserved win by her. I tried to catch her. I kind of made a run. Too late, but it's okay.”

Toledo native Stacy Lewis posted a final round 5-under par to finish in solo third at 16-under par, her career-best finish at her hometown event and her season-best result. 2019 U.S. Women’s Open champion Jeongeun Lee6 finished in fourth at -14 to collect her sixth top-10 finish of her rookie season.

LEWIS PERFORMS UNDER THE GUN

Stacy Lewis fired a 5-under 66 on the final day of the Marathon Classic presented by Dana, scooting up the leaderboard to a third-place finish. Lewis’ performance at Highland Meadows Golf Club this week was the best finish of her 13 starts of this event and her first top-5 finish since her T5 at the 2017 Sime Darby LPGA Malaysia.

“Really the last two weeks I feel like I've played really good. I've been working really hard on a few things,” said Lewis, who captured her first top-10 finish since coming back from maternity leave and was greeted by husband, Gerrod and accompanied by baby Chesnee on the 18th green. “It’s just nice to see it coming together, especially under the gun. There was some pressure out there today, especially early. Was able to get it around pretty good.”

The 11-year LPGA Tour veteran played with rookie Jennifer Kupcho on Sunday, who shot even par for a share of fifth place, and the major champion was impressed by the 2019 Augusta National Women’s Amateur champion.

“I know she wanted to play better today, but I think she's going to be out here for a long time,” said Lewis of the young rookie, Kupcho. “I was impressed with the ball striking. Hits it very high; almost hit a little bit of a fade. Once she figures out the nerves and kind of handling pressure a little bit, I think she's going to be in a good spot.”

Kupcho finished in a tie for fifth after shooting an even-par 71 but had a few takeaways after playing with Thompson in the third round and Lewis in the fourth.

“I mean, honestly, the fact that I can't finish a tournament strong,” said Kupcho, hitting 10 of 14 fairways and 11 of 18 greens in regulation, “but getting to play with Stacy and Lexi yesterday, definitely seeing how their ball-striking is and how good their iron game is, definitely something to work on and definitely can learn and did learn from their games.”

RUNNER-UP THOMPSON PROUD OF HER ATTITUDE

Lexi Thompson made the turn in the final round on Sunday five strokes behind Sei Young Kim but managed to close in on the lead to finish just two strokes behind in solo second at -20. On the back nine, Thompson birdied No. 10, 12, 14 and 17, while the final pairing both bogeyed No. 16 and closed with an eagle on No. 18 in Thompson fashion, just as she had in Round 3.

“Obviously we all want to win but like I said, [Sei Young] played great golf,” said Thompson who shot a final-round 65. “On top of it, I'm very proud of just my attitude this whole week. I could have faltered today with my little bit of a start and just not ball striking it the way I wanted to or the way I have the last three days. But I stayed in and stayed positive.”

Positive vibes have been boosting the 24-year-old American’s confidence and has been paying off with three second-place finishes and a win in her last five starts. Interestingly enough, Thompson eagled the final holes in the third and fourth rounds of the ShopRite LPGA Classic presented by Acer (win), Meijer LPGA Classic for Simply Give (T2) and this week.

“It's a great just tune up just to see where my game is at. I knew it was in a spot, so just going to try to keep that going,” said Thompson referring to her confidence heading into back-to-back majors. “Majors are a very long week, so I am just going to take it one shot at a time. Probably play a little tougher than here. But it'll be a good two weeks.”

Pannarat Thanapolboonyaras made a hole-in-one on No. 8 from 122 yards using a 9-iron on Friday at the Marathon Classic. There are now 18 aces recorded this season and a total of $360,000 raised thus far.