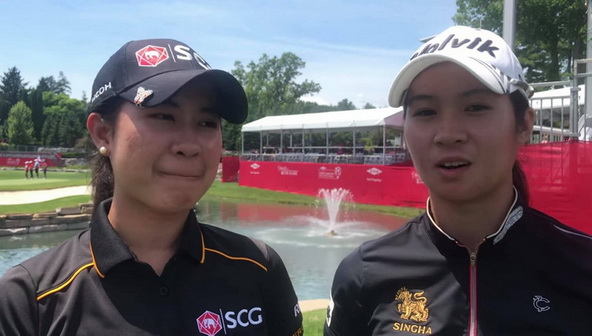 A trio of teams sit atop the leaderboard at -10 following Thursday’s four-ball second round at the inaugural Dow Great Lake Bay Invitational. Thailand's Pannarat Thanapolboonyaras and Pajaree Anannarukarn shot a 62 to fall a shot behind on nine under.

A trio of teams sit atop the leaderboard at -10 following Thursday’s four-ball second round at the inaugural Dow Great Lake Bay Invitational. Stephanie Meadow and Giulia Molinaro returned a bogey-free 10-under 61 on Thursday, including five consecutive birdies at holes 5-9. Celine Boutier and Karine Icher shot a bogey-free 62, whileMorgan Pressel and Paula Creamer, who were in second following the first round, carded six birdies on their opening nine and played even-par golf for the rest of their round en route to a 64.

“Obviously best ball, you can give yourself as many birdie opportunities with your partner, and Morgan played awesome on the back nine, which was our front nine,” said Creamer, who is looking for her first win since 2014. “I couldn't really get anything going on this side. But, you know, we've got two more days left so we're not in bad position by any means. It wasn't our A game today, but still very pleased with where we're sitting.”

Six teams are tied for fourth at -9, including first-round leaders Brooke Henderson and Alena Sharp and Michigan native Kris Tamulis and Kim Kaufman. FrenchwomenCeline Herbin and Joanna Klatten shot a bogey-free 10-under 60 on Thursday, highlighted by a hole-out eagle-3 for Herbin at No. 12, and are tied for 14th.

Notables to miss the cut include Suzann Pettersen and Catriona Matthew (-1), Maria Fassi and Jennifer Kupcho (-1) and Stacy Lewis and Gerina Piller (-1).

With a lights-out 9-under 61 on Thursday, Stephanie Meadow and Giulia Molinaro vaulted up the leaderboard. Team M&M started the day in a tie for 12th after shooting 69 in Wednesday’s four-ball session. Meadow carded seven birdies and one bogey on Thursday to Molinaro’s four birdies, jumping the duo into a tie for the lead.

Molinaro gave the credit to Meadow’s hot putter, especially early in their round. “When one person's not playing well, the other person's going to pick up the slack,” said Molinaro, a born Italian who spent most of her life living on a Kenyan luxury resort before coming the United States at age 16.

This could line up to be an extra special week for Meadow, a native of Northern Ireland and a member of Royal Portrush Golf Club, the host of this week’s British Open. If she can’t be at her home course this week, at least she is tasting success in Michigan.

“It’s amazing to have the Open at Royal Portrush this year. It’s my home golf course and I wasn’t sure if we’d ever get it so it’s going to be spectacular to watch,” said Meadow, a graduate of the University of Alabama who now lives in Phoenix. “It’s a fantastic golf course. It’s got some amazing views. If the wind blows it’s going to play really tough.”

Both players are in search of their first career victories. Meadow would become the LPGA Tour’s first winner from Northern Ireland, while Molinaro would join Silvia Cavalleri (2007 Corona Championship) as the only Tour winners from Italy.

CREAMER AND PRESSEL PARTNERSHIP PAYS OFF IN ROUND TWO

Team Pink put on a clinic on their front nine during the second round of the Dow Great Lakes Bay Invitational. Paula Creamer and Morgan Pressel birdied six holes, finishing in a tie for first at -10. Nine straight pars on their back nine tested the patience of the dynamic duo, but Pressel said they still stuck to their strategy for the day.

“Our game plan for the whole day was two balls in play,” said Pressel. “Maybe a couple of holes we really did that well and that allows you to swing a little bit more freely and be more aggressive in best ball. I think we went at all the pins that we could, for sure.”

The friends said that this tournament feels like a preview for the Solheim Cup. Pressel, a veteran of five USA Teams, currently sits 27th on the U.S. Solheim Cup Team Rankings, with seven-time team member Creamer at 33rd. The U.S. Team will not be finalized until after the CP Women’s Open and while Solheim Cup points will not be awarded following this team event, Creamer said playing well the rest of the week is another opportunity to show Team Captain Juli Inkster they belong in Scotland come September.

“We would be lying if we weren't thinking about that. But we're a team, we're kind of a little package deal with that.  When we're together, we always play really solid. That's why we've always had a very good record with that,” said Creamer. “You know what happens, happens. Tomorrow's not going to dictate that.  We still have some events even after this one to try and get up there. But we're playing to win this week and whatever happens, happens.”

Boucher is the French word for Butcher, and playing as Team Boucher, the French team of Celine Boutier and Karine Icher cut right to the top of the leaderboard on Thursday.

After a 2-under 68 in Wednesday’s opening foursomes round, the duo combined for eight birdies in Thursday’s four-ball round at the Dow Great Lakes Bay Invitational to enter the third round tied for the lead at -10.

Despite the wind and tricky hole locations on Thursday, Icher was confident in their strategy partly because her partner rarely makes mistakes.

“The plan is to put always a ball in play, and then when you know you have a ball on the green, I mean the other one can go for it,” said Icher of their strategy for four-ball. “That's the goal of four-ball. And my partner is so like very accurate, it's so nice to rely on her because, you know, she's going to be in the middle. So then you can take a little bit more risk. It worked pretty good. We stayed patient pretty much the whole course. It's not an easy course. It was very windy today and tough pin positions.”

Each time one of them made a bogey, the other was in for at least par, and they finished with three straight birdies, including a long putt on 18 from Icher.

“I think overall it was a pretty good day,” said Boutier. “I feel like our games complement each other really well. When I was struggling a bit, she was there to save the team, and the opposite, so it was pretty good.”