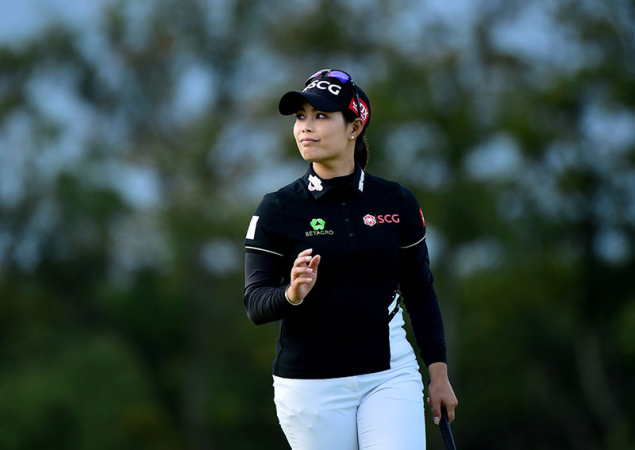 The Aberdeen Standard Investments Ladies Scottish Open trophy may have the name Jutanugarn engraved on it for the second straight year.

2018 champion Ariya Jutanugarn’s older sister, Moriya, fired a 4-under par 67 on Saturday in North Berwick, Scotland to take a one-stroke lead into the final round over Jeongeun Lee6 and Mi Jung Hur.

Through the first three rounds Moriya Jutanugarn has hit 48 of 54 greens in regulation, but she said the key for her is to be patient and keep doing what she’s doing. “I'm just trying to play my game and have fun out there,” she said. “Don't really focus on anything.”

Moriya became a Rolex First-Time Winner at the 2018 HUGEL-JTBC LA Open and on Saturday she said she would love to follow in her sister’s footsteps and capture a win in Scotland. “Well, it would be, of course, like any win, you always feel great with it and especially like Scotland is Home of Golf, of course.”

On Friday, Hur needed just 24 putts to tie the 18-hole tournament record with a second-round 62. While the putts didn’t drop as easily for her during the third round, needing 34 putts, she will be trying for her first LPGA victory in five years by avoiding thinking about the outcome on Sunday.

Lee6 has been consistently in contention during her rookie season, with 11 top-16 finishes including a major win at the U.S. Women’s Open. Playing for the first time in her career on a links style course, at The Renaissance Club, Lee6 said she was surprised with how easy she’s settled in.

“This is my first time, and I thought it would be really hard, but actually my shots and my putting strokes were pretty good,” Lee6 said after a third-round 66. “So that's why I've been starting playing a lot better than before. But the most part I'm worried about is tomorrow's weather, because it seems like the forecast, it's going to rain all day. So we'll see how that goes.”

2017 champion Mi Hyang Lee is in solo fourth at -12, while Scotland’s Carly Booth, Ariya Jutanugarn, Jane Park and Chella Choi are tied for fifth at 10-under par heading into Sunday’s final round.

2018 champion Ariya said that Moriya, even though she’s holding the 54-hole lead, will be in charge of cooking the dinner Saturday night and Moriya joked, “I would never want to try her [Ariya’s] food.”

Team Europe Captain Catriona Matthew will name her four picks for the 2019 Solheim Cup on Monday at The Gleneagles Hotel in Scotland, the day after the completion of the final qualification event, the Aberdeen Standard Investments Ladies Scottish Open at The Renaissance Club.

The European team consists of the top three from the LET Solheim Cup points list, followed by the next five from the Rolex Women’s World Golf Rankings and four captain’s picks.

Spain’s Carlota Ciganda, who is not playing at the Aberdeen Standard Investments Ladies Scottish Open, has locked in her position as one of the qualifiers from the LET Solheim Cup points list. Caroline Hedwall and Anne van Dam currently hold the remaining two spots, but it will depend on their finish in Scotland this week with a few other players in the mix.

Georgia Hall, Charley Hull and Azahara Munoz are all confirmed to make the team based on their positions on the Rolex Women’s World Golf Rankings. Projections showCaroline Masson, Anna Nordqvist and Celine Boutier have the best chance for the final two Rolex Rankings spots depending on their finishes in Scotland.