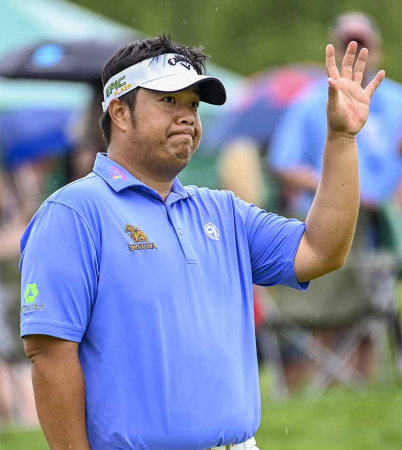 Jersey - Kiradech Aphibarnrat could only shake his head in disappointment at US$9.25 million THE NORTHERN TRUST on Saturday.

The Thai star, who was fighting to extend his run in the PGA TOUR’s FedExCup Playoffs, slumped to a third round 5-over 76, which included a quintuple nine on his last hole to all but ensure an end to his 2018-19 season this weekend.

Entering the first of three Playoffs event in 76th place on the FedExCup points list, Kiradech needed to finish 27th or better at Liberty National Golf Club to advance into next week’s BMW Championship, which is limited to the top-70 players.

A lingering right knee injury, suffered in April, has not helped matters as Kiradech exchanged two birdies against as many bogeys through 13 holes before signing for a nine after he lost his ball off the tee and then needed three putts on the 18th hole.

“Since that day three months ago, I have an injury on the right knee. Tomorrow will be the last day of my season on the PGA TOUR. I will try to fight on even if I have to be carried off the course,” Kiradech said on social media.

The 30-year-old Asian star will begin the final round in T79 with rounds of 67, 73 and 76 putting him on 5-over 216. American Patrick Reed leads THE NORTHERN TRUST by one shot from Abraham Ancer of Mexico with his 199 total.