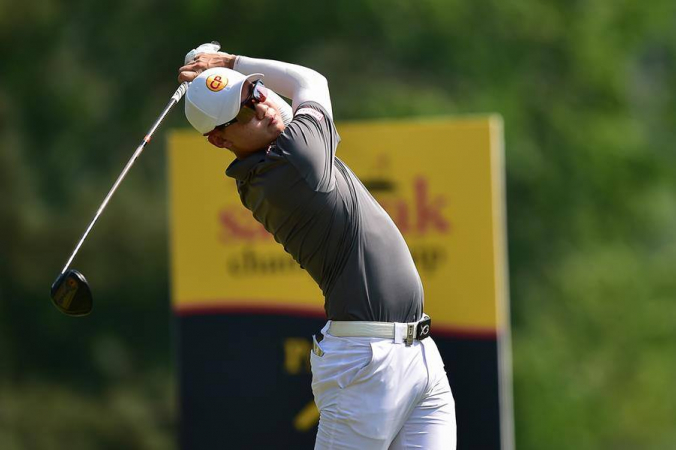 Rising Thai star Jazz Janewattananond put himself in prime position for a fifth Asian Tour victory after posting a solid eight-under-par 64 to grab a one-shot advantage at the halfway stage of the Sarawak Championship in Malaysia on Friday.

The 23-year-old Jazz, who has already won twice this season, sparkled with a flawless round highlighted by eight birdies to sit atop the leaderboard with a 15-under-par 129 total at the Damai Golf and Country Club.

“It was a pretty solid round. I holed a lot of putts, missed some as well but overall it was good. You just had to go out there and try your best. Every part of the game was pretty solid. The driver wasn’t as great but I kind of got away with it,” said Jazz, whose two-day total of 15-under-par 129 is one shot better than the 36-hole score recorded in the inaugural edition of the Sarawak Championship last year.

“All the birdies today were pretty similar. Nothing stood out really. The greens are better this year and we were able to roll in more putts out there. It was nice playing alongside Scott Hend and Miguel Tabuena as well,” added the Thai No 1, who is bidding for a fifth Asian Tour title and his third this season to give himself a chance to automatically qualify for the International Team, led by captain Ernie Els, for the Presidents Cup.

“Scott made a good comeback with two closing birdies as well. It was fun to watch him fight back. It’s going to be the same tomorrow, just focus on hitting fairways and greens and we’ll see how it goes,” Jazz added.

Miguel Tabuena of the Philippines, who played alongside Jazz, also kept the blemishes off his card as he signed for a second straight 65 to share second place with Chinese Taipei’s Hung Chien-yao (66) and Australian Andrew Dodt (64) in the US$300,000 Asian Tour event.

Dodt, a two-time Asian Tour winner, got off to a sizzling start with an eagle on the 10th hole followed by four successive birdies from 11 before turning in 30. The 33-year-old Australian is playing in his first event since a two-month layoff following an injury in April.

Thai trio Pavit Tangkamolprasert, Danthai Boonma and Sadom Kaewkanjana shared fifth place on matching 133s following respective rounds of 65, 66 and 67 at the full-field event, which is celebrating its second edition on the Asian Tour this week.

The halfway cut was set at four-under-par 140 with a total of 72 players progressing into the weekend rounds.