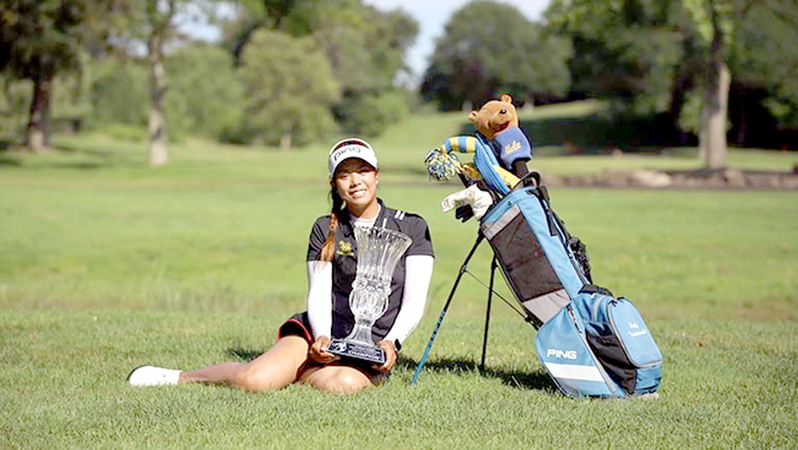 Thai sensation Patty Tavatanakit  secured the Gaelle Truet Rookie of the Year thanks to three victories in 10 starts since making her professional debut at the Island Resort Championship in late June.

“It’s just crazy and haven’t had the opportunity to reflect on what I’ve done,” Patty or Paphangkorn said.

“Lately it has been boom, boom, boom and now we’re here at the last tournament. I knew I was capable, but it is unexpected which helped me get to this point. My spring at UCLA left me in a spot where I couldn’t even imagine playing this well. Not at all. It took some time for me to realize how important golf is to me and everything is so much clearer.”

Professionals, sponsors and amateurs came together on Tuesday night for the “Road to the LPGA” Final Lap VIP event at Daytona International Speedway in celebration of the Symetra Tour Championship at LPGA International from Oct. 3-6. While the Player of the Year honor is still to be decided, the Symetra Rising Star Award and the Gaelle Truet Rookie of the Year have both been determined.

Ssu-Chia Cheng (Taipei, Chinese Taipei) collected the Symetra Rising Star Award, which is presented to the player making the biggest jump in the Volvik Race for the Card from the previous year. In addition to receiving a $1,500 check, Cheng will donate $1,000 to a charity of her choice.

Last season, the 21-year-old played the weekend 12 times in 19 starts and earned $23,588 to finish No. 46 on the money list. Entering the Symetra Tour Championship, Cheng owns seven top-10s including her first professional win at the FireKeepers Casino Hotel Championship to amass $97,325 and sit at No. 3.

“It is really good to have this award, all the hard work pays off,” said Cheng. “There’s a huge difference between last year and this year. Standing here, I know my game improved a lot and mentally got better. It definitely proves how much work I put in and is satisfying to see such a large jump in confidence at all levels.”