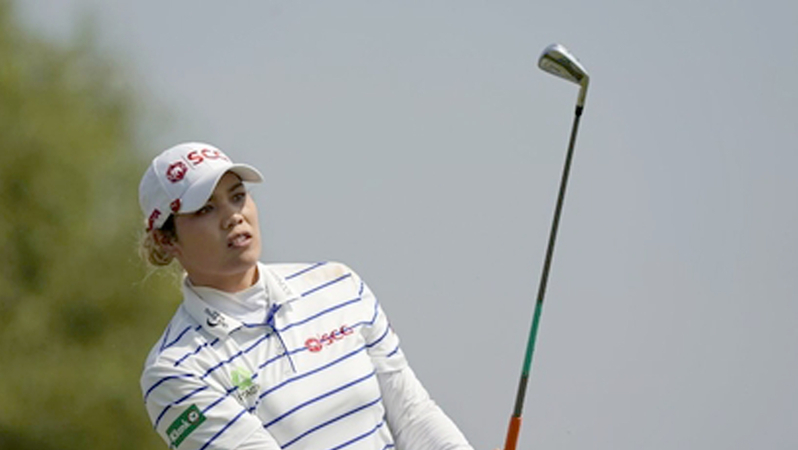 After 36 holes at the Volunteers of America Classic, three players are tied for the lead at -9. Canadian Alena Sharp, playing in her 307th event without an LPGA win, shot Friday’s round of the day, a 6-under 65 that included an eagle at No. 6 from a greenside bunker, to vault to the top of the leaderboard.

“I didn't have a great lie. I had to like really get low because I was against the back of the lip,” said Sharp, who also carded five birdies but bogeyed No. 18 after sending her approach long and over the green. “I was just happy to get it out and it hit the pin and went in.”

Sharp is joined at -9 by a pair of Americans also looking for their first LPGA victories. Brittany Altomare, who went 2–1–1 for Team USA at the 2019 Solheim Cup, shot a bogey-free 66, while Texas native and 2019 LPGA Tour rookie Cheyenne Knight returned a 4-under 67 on Friday. A good finish is especially crucial for Knight, who is 121st on the Official Money List with $71,346. She needs to break into the top 100 to prevent a return trip to LPGA Q-Series.

“It doesn't help me if I finish T15 or T20. It helps if I get close to winning, get up on that board,” said Knight, who earned her LPGA Tour card by finishing T27 at the 2018 Q-Series. “So that's all I'm looking at, putting my foot on the gas and being fearless. I have nothing to lose and that's how, you know, I think you should always play.”

Thai hope Ariya Jutanugarn hit a seocnd striaight 68 for a two-day total of six-under par to sit three shots off the lead.

First-round leader Stephanie Meadow opened on No. 9 and after making the turn at -1, she went on a bogey-birdie-bogey-birdie-bogey streak at holes 3-7 to finish at even-par 71 for the day. She holds solo fourth, with Katherine Perry and Jaye Marie Green tied for fifth at -7 after second-round 68s.

Brooke Henderson carded two eagles in her round of 67 and is tied for 20th at -4, while defending champion Sung Hyun Park shot a second-round 71 and is tied for 32nd at -2.

BACK TO THE FUNDAMENTALS FOR KNIGHT

“Play Cheyenne Knight golf. You don’t need to be anybody else.”

That is the simple mentality the 2019 LPGA Tour rookie has for the Volunteers of America Classic. She finished Friday in a tie for the lead at -9, the first time she has led in her LPGA career. Knight said she finally found something in her swing at the Indy Women in Tech Championship that has contributed to the recent success.

“I hit a draw and I haven't been able to hit a draw, so I've been like just shallowing out my club a little bit, trying to hit kind of a hook and it's been drawing. That's like my normal shot shape,” said Knight. “I've really been hitting my numbers good because I'm hitting it solid, not mis-hitting it, so it's been good. And my driver's straight. In college like I never missed a fairway, rarely missed a green, made a few putts. Just doing that.”

The Aledo, Texas, native said one of her greatest assets this week is her mindset. “I've been working really hard on like my mental game and putting things into perspective,” she said. “I'm just going out there and living my dream. I mean, like coming full circle. I remember I played in the Volunteers of America when I was still in college and now as a pro, doing what I love every day. I think it's just like more of like appreciation like about my mindset.”

Jaye Marie Green entered the final round of the 2019 U.S. Women’s Open one stroke off the lead. Her first win, let alone her first major victory, was well within her grasp. But derailed by three bogeys on the back nine, her final-round 74 dropped her out of contention and into a tie for fifth.

Green fully admits that the disappointment got to her. Since that week in Charleston, she has missed six of 11 cuts and only cracked the top 25 once. Throw in a move and all the trappings of a hectic traveling life, and it’s understandable that the 25-year-old Floridian would be frustrated. So two good rounds at the Volunteers of America Classic, paired with an inspirationally sunny outlook on life, were exactly what she needed.

“I think about that Open almost every day. That was a tough one for me,” said Green after her second-round 68 at the Volunteers of America Classic. “You know, people say, oh, great top-five, but in my heart, I won that thing. I learned a lot just to stay patient. And there's more to life than golf. It helps keep my attitude good because at the end of the day we're all people and I'm more about, like, I want people to feel good.”

That patience paid off in the blistering weather conditions at Old American Golf Club. Green has only carded two bogeys in her first 36 holes, something she attributes to throwing her game back a few months, when things were clicking at the U.S. Women’s Open.

“Honestly, I've been working on not changing. Sometimes when I want to get better, I'm like, you could get better without changing things,” said Green, who is tied for fifth at -7 heading into the weekend. “So that's what I've been really working on is just kind of swinging my swing, playing my own game, because that's what got me close at the U.S. Open, so I've been trying to just like harness that energy.”

Katherine Perry rolled into her third Volunteers of America Classic with one goal: avoid Q-Series. Perry, who ranks No. 118 on the Official Money List, knows she needs a high finish to miss the two-week event in her home state of North Carolina. She inched closer to her goal after posting a second-round 68 to comfortably make the cut at -7 and head into the weekend tied for fourth.

Perry knows what it is like to play with mounting pressure on her back. She posted her career-best finish of T5 at the 2019 Pure Silk Championship after Monday qualifying. The result catapulted her up the LPGA Priority List, earning enough official money before the first reshuffle of the season to jump from Category 18 to 13.

“It has been a career year. It's been a little up and down, just the excitement of the Pure Silk and then playing pretty well, making a lot of cuts there,” said Perry. “I didn't keep moving forward like I really wanted to, but I feel like my game's in a good spot right now. Just keep getting better.”

With two rounds of play left to determine her full Tour card fate, Perry reminded herself what all the time off the course could bring. “In October I want to take my nephew to the fair and hang out with him,” said Perry. “That would be great.”