Rookie Fabio Quartararo of Yamaha set the fastest lap record of 1.29.719 minutes in Buriram to win the qualifying competition of the PTT Thailand Grand Prix at the Chang International Circuit on Saturday.

The Frenchman, despite a collapse on the fifth turn, will start Sunday’s final in the pole position alongside Yamaha teammate Maverick Vinales, who came second in 1.29.931, and defending champion Marc Marquez, 1:30.431, at third.

“It was an amazing lap, not only this one but also from the run before,” said the 20-year-old rider from Nice who also topped the earlier Free Practice 4 with 1.30.755, leaving world champion Marquez at 1.30.782 to settle for second.

“I crashed in the last lap because I was pushing for another fantastic lap. We know why we crashed. We knew the limit. It was an amazing job for the team. I’m really looking forward to tomorrow’s race because we have a good pace. Let’s see if we can focus on tomorrow’s race,” added Quartararo, whose best attempt was at second place twice, in Catalan and San Marino this year.

Sixth-time champion Vinales, who finished third behind Marquez and Italian Andrea Dovizioso here 12 months ago, was pleased that his team dominated the top two spots heading into Sunday’s final.

“The objective is done. We beat him [Marquez] in a row. It’s very important for us. We rode very fast today. We will see tomorrow if we can make another step,” said the 24-year-old from Figueres. 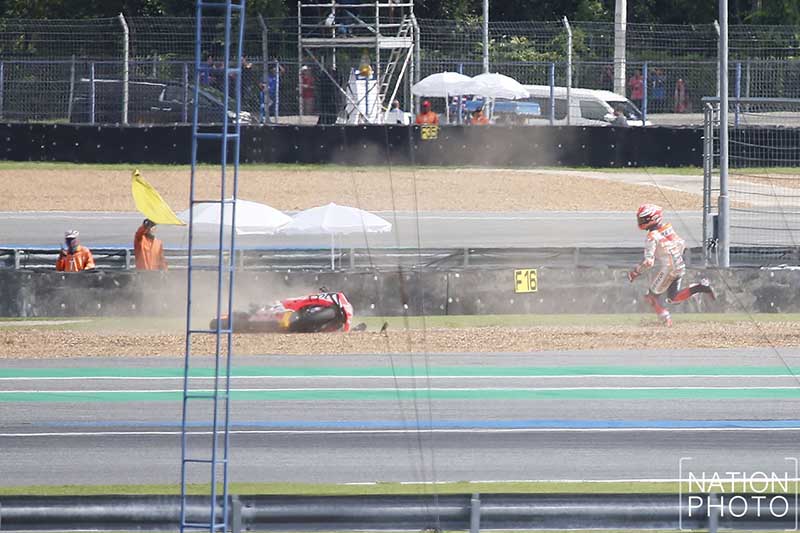 Marc Marquez after the Saturday's crash.

Marquez, the crowd favourite in Buriram, also had another collapse on Friday during practice. He needs to beat Dovizioso by two points on Sunday to claim his sixth world title.

“I pushed too much on that turn 5. It’s difficult. Quartararo also crashed. And so did Valentino [Rossi]. It’s a bump there. Apart from that, everything was under control. It was a good lap in the qualifier. I was coming faster. But I’m happy with how we work as a team,” said Marquez, who has secured eight race titles under his belt this season.

"I have pain all over my body but that's not an excuse. Tomorrow we are going to try to go for the position," he added.

Thousands of fans witnessed the second edition of the home MotoGP on Saturday despite torrential rain in the morning.

Home rider Somkiat Chantra of IDEMITSU Honda Team Asia in an interview after coming 13th in the Moto2 qualifying competition of the PTT Thailand Grand Prix at the Chang International Circuit on Saturday.

Posted by The Nation Bangkok on Saturday, October 5, 2019