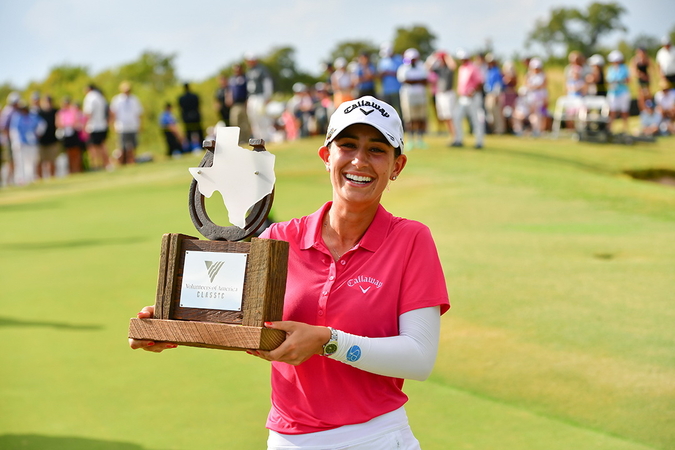 In front of cheering family and friends, Texas native Cheyenne Knight captured her first LPGA Tour title, finishing the 2019 Volunteers of America Classic at a tournament-record 18-under 266 and earning a two-stroke victory over Brittany Altomare and Jaye Marie Green.

The 22-year-old Tour rookie, who lives just 60 miles away from Old American Golf Club in Aledo, became the fourth American to win in 2019. She also cements two years of LPGA Tour status and avoids a trip to Q-Series later this month in North Carolina.

“I've always dreamt of a putt to win an LPGA event. I said when I got my card that this was the event I was most looking forward to and who would have thought this helped me like secure my card,” said Knight, who is the first player from the University of Alabama to win on the LPGA Tour. “It's just been such a good learning experience because I thought I was planning on going back to Q-School and with this win, it just means everything knowing that I can persevere and knowing that I'm strong enough to do anything.”

Knight, who started the day one stroke behind Green, only missed five fairways all week and played bogey-free golf on Sunday, carding five birdies for a 66 to tie for the low round of the day. But those birdies required more than a bit of hometown luck. She chipped in for birdie from off the green at holes 9 and 10, two moments that brought a huge smile to Knight’s face and clearly changed the momentum of her round.

“On nine I debated putting it, but I was just like going through too much of fringe and I was like, you know, I've been chipping it well,” said Knight. “I hit my spot just how I wanted to and it was perfect. And then 10 I was kind of in between clubs. I took the shorter one and the wind just kind of knocked it down. Yeah, on 10 that was just, I mean, you have to laugh about that. I mean, two chip-ins in a row?”

Playing one group ahead of Knight, Altomare stepped to the 18th tee just one stroke off the lead. But after sending her approach just off the back of the green, she made bogey to drop into a tie for second with Green. It is Altomare’s second runner-up finish of 2019, joining the Meijer LPGA Classic for Simply Give. Green earned her career-best finish after a final-round 69, her highest round of the tournament.

Georgia Hall and Jane Park rounded out the top five at -11. Stephanie Meadow and Katherine Perry, both in need of strong finishes ahead of a potential return to Q-Series, tied for sixth at -10. Meadow moved from 112th to 99th on the LPGA Money List with $127,796 and will maintain full status for 2020, but Perry could not break into the top 100 and will head to Q-Series in Pinehurst, N.C.

KNIGHT CREDITS HELP FROM ABOVE

After Cheyenne Knight’s final putt dropped at No. 18, she was immediately surrounded by family and friends dousing her in water and enveloping her with hugs. She also raised her hands to the skies, recognizing her spiritual support system as much as those physically here with her on Earth. Knight, who openly professes a deeply personal faith, knew that there were two others with her every step of the way. After her win,

Knight has long relied on her faith to get her through both the good times, like being named 2017 SEC Player of the Year for the University of Alabama, and the tough times. In 2008, her older brother, Brandon Burgett, was killed when the truck he was driving was hit by a drunk driver who was on the wrong side of the road. She said she felt her brother’s presence with her as she made her way around Old American Golf Club, and even through what had been a difficult rookie season on the LPGA Tour. She entered this week’s tournament 120th on the Official Money List and in serious jeopardy of returning to Q-Series to better her LPGA status. Instead, she is secured on the LPGA Tour for two years thanks to her victory.

“I've prayed about this. Like it's been a really hard year and I always knew that even though I didn't understand at the time, I knew God was in control,” said Knight. “I think I had a second caddie out there and I know he's watching in heaven, just so proud of me. It's incredible, I just can't really put it into words right now.”

That faith even manifested today in an uncanny way. Burgett’s football number was 33, which Knight holds dear as her lucky number. She even has it on her yardage book for her to see before every shot.

Her final round at the Volunteers of America Classic? Two 33s for a final-round 66, yet another tribute to one lost too early. A beautiful sign of a week that was meant to be for Cheyenne Knight.

BITTERSWEET FEELINGS FOR GREEN AND ALTOMARE

Brittany Altomare and Jaye Marie Green came just short of their first wins on the LPGA Tour, finishing in a tie for second at -16. For Altomare, her performance added to a year of consistency. The 28-year old only had three bogeys the entire tournament, with two just in the final round, and finished with her second runner-up result of the season. It was her 22nd straight cut made, and she said she is just waiting for her turn in the winner’s circle.

“It's just been close a few times, so just a little frustrating. But game's there, so hopefully -- I just feel like I press on the gas pedal and somebody presses it down even further. So eventually, so we'll see,” said Altomare.

Green played in the final group with Knight and witnessed the hometown crowd’s support for the Texas winner. “It was actually really cool. I was really in the zone, so I didn't really notice too much of what was going on around me. It was good,” said Green. “She's from around here and she had to play good to keep her card and then she won, it's cool.”

Despite the finish, Green said she walked away with plenty of positives and a new goal for the end of the year. “Me and my brother (and caddie Matt Green) were just talking. He goes, ‘Jaye, you played great, it was just you didn't lose, you didn't -- you didn't lose it, she just won, don't worry,’” said Green. “He goes, ‘I think that gets you in CME or close to CME,’ and he goes, ‘I think that's a good one to win.’ I was like, ‘you're right, all right, we'll save it.’”

With her T8 finish at the Volunteers of America Classic, Jeongeun Lee6 moves into a tie for first place with Brooke Henderson, Jin Young Ko and Hyo Joo Kim with 10 top-10 finishes. Ariya Jutanugarn and Nelly Korda sit in a tie for fifth at nine.