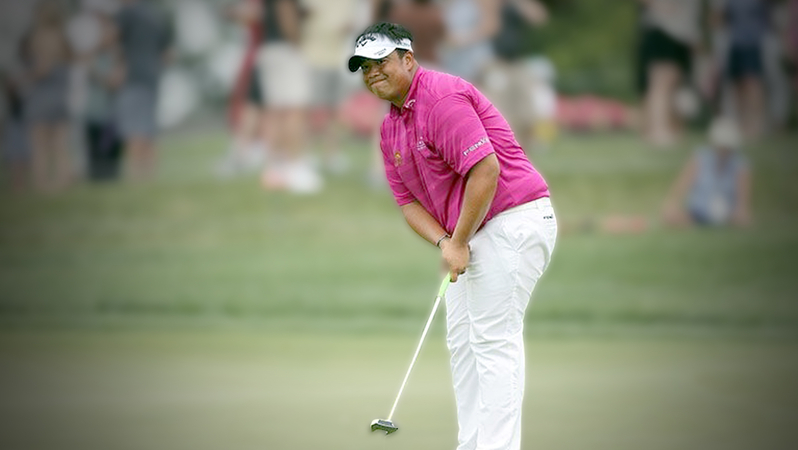 Jeju island - Thai stars Kiradech Aphibarnrat and Jazz Janewattananond are fired up ahead of the US$9.75 million THE CJ CUP @ NINE BRIDGES starting on Thursday after enjoying tune-ups with renowned swing coach Pete Cowen.

Kiradech will make his first start of the new 2019-20 PGA TOUR Season after successfully retaining his TOUR card by finishing in 83rd position on the FedExCup points list. While he is still nursing a knee injury, the big-hitting Thai is optimistic of a strong showing in what is the first of three lucrative PGA TOUR tournaments in Asia this month.

“I’m getting healthier, lost some weight and feel stronger. I’ve been working like a proper athlete but I still have a lot to work to do. My right knee is slowly recovering and hopefully it can get better,” said Kiradech today.

Since taking a tumble at the Masters Tournament in April, Kiradech has struggled with a partially torn anterior cruciate ligament (ACL) in his right knee. He started working with physiotherapist Anthony Gheogegan, who worked with Olympic athletes such as Usain Bolt previously, and believes it has helped bring some relief.

“I spent three days with him and he’s the first guy who has managed to help improve my knee which is amazing. It’s a combination of chiropractor and physio work and soft tissue treatment. But it has relieved the pain in my knee,” said Kiradech.

“My game feels much better, spent some good sessions with Pete over the last two days and if I can stay strong till Sunday, you might see a few good things. We’re working on some  things to make sure I keep things right.”

The burly 30-year-old believes he can make a bigger impact in his second season on the PGA TOUR. “I’m getting used to the TOUR, players and golf courses, feels more like home now,” said Kiradech, a former Asian Tour No. 1.

Jazz, 23, is featuring in this week’s elite 78-man field by virtue of being the current Asian Tour Order of Merit leader and the reigning Korean Open champion intends to use the next three PGA TOUR tournaments which he is exempted as well to test his game against the best golfers in the world.

“It’s a demanding golf course, a ball-striker’s course and you need to putt well. It’ll test every aspect of your game. As you’ll expect, it’s a PGA TOUR event and you’ve got the best players here who play on the biggest tour in the world. I’m happy I have a chance to be here and to compete against them,” said Jazz.

Two recent top-5 finishes on the Japan Golf Tour, which helped seal his place next week’s inaugural ZOZO CHAMPIONSHIP in Japan, have given Jazz a boost in his attempt to challenge for the title in Korea.

“A month ago, I was struggling a bit, couldn’t get the ball rolling but I found my way back again and had some top-5s, so I hope to see if the trend keeps that way,” he said.

“It’s a good opportunity, to get into these next three events, it’s a dream. At the start of the year, every player wants to have these as the goal. I said I wanted to get into CJ, ZOZO and HSBC (WGC-HSBC Champions in China) and it’s worked out.”

He aspires to join Kiradech on the PGA TOUR but is prepared to bid his time. “It’s no rush, a step by step process. I’m improving for sure but there’s no such thing that I’ll definitely get there. It will happen only when I get there. I just want to keep improving and the next three weeks will give me the chance to see where I am out here. It’s great that I could work with Pete this week as I didn’t know he would be here. He can always give me  the direction that I need to take in my game.”