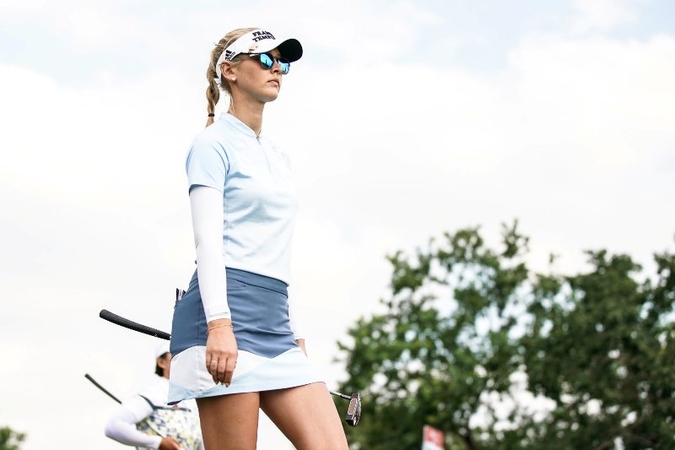 After 54 holes at the 2019 Buick LPGA Shanghai, two Americans have pulled clear of the field.

Playing in the final group, Jessica Korda and Danielle Kang both returned rounds of 6-under 66 on Saturday at Qizhong Garden Golf Club. Korda leads the field at a tournament-record -15, with Kang just one stroke behind at -14.

Korda carded eight birdies on Saturday, including sticking her approach for birdie at No. 18 to 3 feet, to pull one stroke ahead of Kang. Despite the low numbers on her scorecard, Korda said she’s been battling through some swing issues since arriving in Shanghai.

“I've been struggling a little bit with my swing, so I've been working on it every day. It's slowly starting to kind of take its groove,” said Korda, who has five LPGA victories, most recently at the 2018 Honda LPGA Thailand. “And then just making some putts. You know, my speed has been pretty decent and giving myself some opportunities, which is what I need out here.”

Kang stepped to the tee at the par-4 17th two strokes off Korda’s lead. She promptly drove the green, setting up an eagle at the Aon Risk Reward Challenge hole and briefly pulling into a tie for the lead before Korda’s birdie at 18.

“I hit a dragonfly on my practice swing on the tee box so I was kind of panicking about that,” joked Kang, who is looking to defend her victory here in 2018. “Honestly, I know people might think that shouldn't throw you off, but Olly (Brett, her caddie) was joking around the entire time that the dragonfly is okay. The yardage just came out to be a perfect 5-wood and he said I could cover the entire bunker, so went middle of the green and he said rip at it and I did.”

Brooke Henderson, who led by two strokes at the start of the day, had an up-and-down round on Saturday, carding an eagle, two birdies, three bogeys and a closing double bogey for a 1-over 73. The Canadian’s tee shot at 18 found the penalty area to the left of the fairway and she two-putted to drop to -10 overall, five strokes behind Korda.

Japan’s Nasa Hataoka and American rookie Kristen Gillman are tied for fourth at -9. Rolex Rankings No. 1 Jin Young Ko shot a 68 on Saturday and is tied for eighth at -6.

KORDA COMFORTABLE PLAYING ALL AROUND THE WORLD

With five victories in five countries, Jessica Korda makes the jet-set life of an LPGA player look easy. Already with wins to her name in Australia, the Bahamas, Malaysia, Thailand and the United States, she is just 18 holes away from adding the People’s Republic of China to that winning roster.

Korda attributed that comfort on the road to all the miles she logged as a child, following the career of her father, 1998 Australian Open tennis champion Petr Korda.

“Luckily, I got to travel with my dad when I was a kid, so I'm used to living out of a suitcase. Hotel rooms are homes. It's just another week,” said Korda. “I would just say that foreign golf courses suit me more and maybe jet lag plays some type of positive in that.”

In 2018, Danielle Kang celebrated her 26th birthday in style, turning one year older on Saturday, Oct. 20, and capturing the Buick LPGA Shanghai win on Sunday, Oct. 21. Fast forward a year and she could ring in her 27th year in the same fashion. She sits one stroke off the lead heading into the final round, which this year sits on her birthday.

“Game plan is to stay aggressive with the way I map out the golf course,” said Kang, who came back from a one-stroke deficit in 2018, her same trailing margin in 2019. “Yes, it is my birthday. I'm very excited. Honestly, tomorrow my mom and I are going The Bund (a scenic waterfront area in Shanghai) and I'm excited about that because I haven't been still. I don't know, really don't have a game plan except that. For my birthday plans, that's about it. For golf, just got to keep trusting my golf shots and my read.”

Brooke Henderson would earn her 10th career LPGA Tour victory; she is already the winningest Canadian golfer in the history of the LPGA and PGA Tours, one win ahead of Sandra Post, Mike Weir and George Knudson

Henderson would earn her third title of the season, joining the LOTTE Championship and the Meijer LPGA Classic for Simply Give, and would win three times in a season for the first time in her career