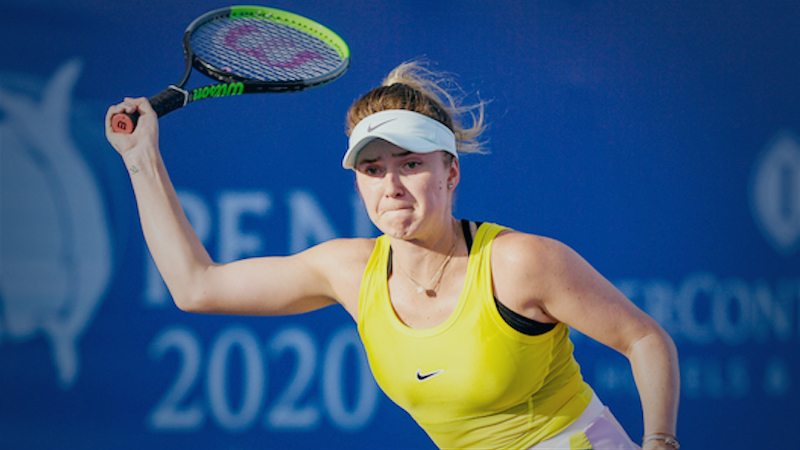 Elina Svitolina of Ukraine, the World No 4, overcame a brief bout of nerves in the second set to beat Bibiane Schoos of the Netherlands 6-2 6-4 to book a second round spot of the US$275,000 GSB Thailand Open in Hua Hin on Wednesday

The top seed who made her first appearance in Thailand was up a break twice at 3-1 and 4-3 in the second set but allowed the 195th-ranked opponent to level at four all. The Ukrainian, however, regrouped her concentration to break again for 5-4 and had to save two break points to serve out for the match after one hour and 19 minutes.

“I have to adjust a bit because I came from Europe which is quite cold,” said the 25-year-old from Odessa. “It’s quite warm here. But in the end I played a solid match. I hope to go far in this tournament,” added Svitolina whose coaching team includes former Australian Open finalist Marcos Baghdatis.

“I haven’t played against her before. My coach will look it up on the internet to see how she plays. But I’ve seen her play before. She is left-handed. I have to be ready for a different spin. But in the end I have to focus on what I have to play on course,” Svitolina said.

Joining her in round two is fifth-seeded Magda Linette of Poland who toppled another Ukrainian Kateryna Bondarenko, the former world No 9, 6-2 6-2.

Meanwhile in the second round actions, fourth-seeded Saisai Zheng of China ousted En-Shuo Liang of Taiwan 6-4 6-3, eighth-seeded Nao Habino of Japan routed Peangtarn Plipuech of Thailand 6-0 6-1 while seventh-seeded Lin Zhu of China went down to 19-year-old Leonie Kung of Switzerland 3-6 1-