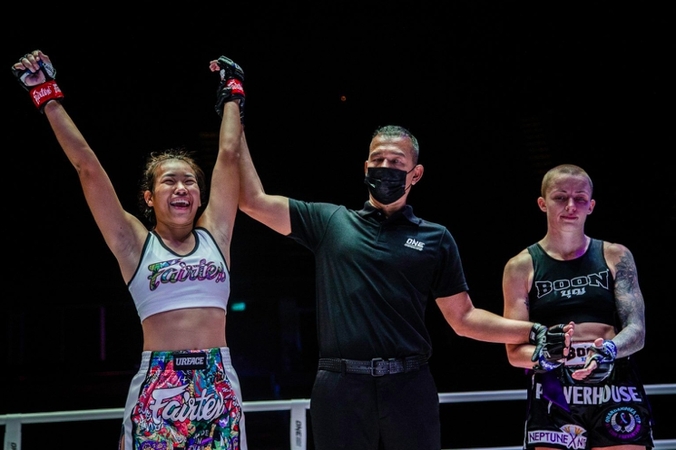 Rising Thai star Wondergirl Fairtex has lofty ambitions for her professional fighting career. Her goals include winning the ONE Strawweight Muay Thai World Title, and eventually making her transition to the realm of mixed martial arts.

The female firecracker from Pattaya, Thailand joined ONE Championship in mid-2020, putting together two impressive finishes to kick off her stint in the world’s largest martial arts organization. Along the way, she has been able to build a solid fan base, and is today one of the hottest tickets in the promotion.

“Joining ONE Championship and being able to showcase my skills on this platform is one of the biggest achievements of my career. It’s a world-class stage and a huge opportunity for women’s Muay Thai. It has been absolutely unbelievable and such an honor,” said Wondergirl.

“To all my fans, I want to say thank you for supporting me. I’m working very hard to improve myself, and I couldn’t achieve anything without the support of the Thai people. I vow to get better everyday for you all. It’s an honor for me to represent Thailand on this global stage.”

At just 22 years old, Wondergirl knows exactly what she wants from her career. That’s more than you can say for people her age.

“My end goal is to become a world champion, a hundred percent. That’s what I want, and that’s what I’m working towards. Right now, nothing else matters. I want to get in the Circle and showcase my skills, and keep winning,” said Wondergirl.

Wondergirl’s next appearance comes against Filipina-American striker Jackie Buntan. The two square off in a Muay Thai contest at ONE: FISTS OF FURY, which broadcasts live from the Singapore Indoor Stadium in Singapore on Friday, 26 February.

If Wondergirl can take care of business against Buntan with another impressive showing, it would certainly boost her up the rankings, and perhaps provide her entry into the upper echelon of the division.

Wondergirl is determined to put on a show, and signal her readiness to face the best challenges, be it in Muay Thai, or down the road, in MMA.

“Right now I am completely focused on my Muay Thai. I think I should be in the Top 10 in my division, so I can expect some big fights down the road. I’m ready physically and mentally for any challenge,” said Wondergirl.

“Initially, I wanted to compete in mixed martial arts. But being given the chance to compete in ONE Super Series, I couldn’t pass it up. One day, though, I would like to compete in MMA. I already have a blue belt in Brazilian Jiu-Jitsu, so I’m comfortable with my grappling.”

ONE: FISTS OF FURY is a three-part event series, beginning with a live broadcast on 26 February. The main event features a ONE Flyweight Kickboxing World Championship showdown between reigning titleholder Ilias Ennahachi and #2-ranked contender “The Kicking Machine” Superlek Kiatmoo9.