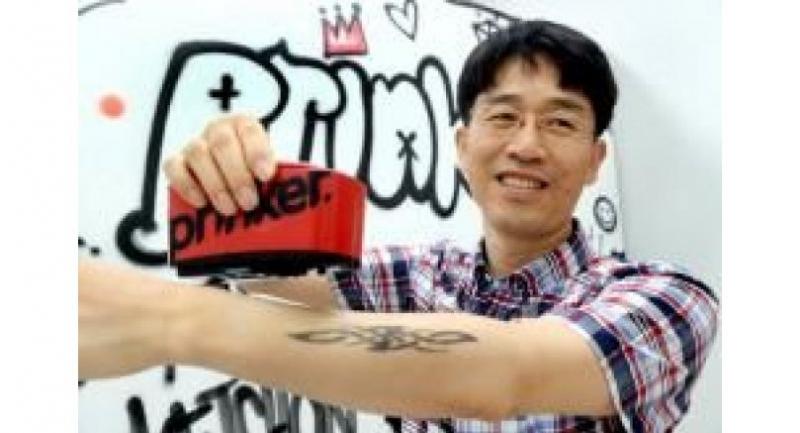 A tattoo that is painless, removable and safe

For those who are not fans of permanent tattoos etched onto the skin, alternative options have long been limited to either body painting or slapping on a tacky tattoo sticker by rubbing it with water.

The new gadget, named “Prinker,” allows users to design their own tattoos using a smartphone and to “print” the customized designs directly to their skin.

Working the device is simple. Pair the printing gadget with a smartphone, draw your own tattoo or choose among more than 500 tattoo designs available on the mobile app, and press send. Then, slowly run the device across whatever body part you’d like to print on to get an instant tattoo.

Prinker works like a regular inkjet printer, except the cartridges are filled with ink made of ingredients used in cosmetics such as mascara and lipstick. Obviously, the printing medium is the human skin, instead of paper.

The temporary tattoo can be easily removed using water and soap. Similar to waterproof makeup products that do not easily wear off, Prinker’s tattoos can last for up to three days if left untouched, the company said.

“Prinker is an entirely new device and solution that lets consumers create tattoos in an easy, safe and fun way,” SketchOn’s co-founder and CEO Jimmy Lee said in an interview with The Korea Herald at the firm’s office in Suwon, Gyeonggi Province.

The idea behind Prinker was initially born from a project team founded in 2011 at Samsung Electronics, where SketchOn’s co-founders, including CEO Lee — who was in charge of ink development at Samsung’s printing business unit — had worked.

“The key was to build an inkjet printer that seamlessly prints ink on the human skin, which has a round surface and does not absorb ink like paper,” said Lee, who studied synthetic organic chemistry at Pohang University of Science and Technology.

“Finding the right cosmetics-grade ink that can freely flow across the nozzle was also a challenge, which SketchOn managed to discover and develop for in-device installation,” he said. “It’s something we’re continuing to work and improve on.”

Currently, the Korean startup is selling its skin printer only to business clients in Korea as a rental service in which the firm provides the Prinker device, ink cartridges and a smartphone installed with the Prinker app.

As for when Prinker will become available to interested individuals, the Korean tech startup is “planning to introduce a direct-to-customer version of the device in the near future,” according to the CEO.

Looking onward, SketchOn is planning to start exporting Prinker to countries overseas to meet rising demand for the device worldwide, said the CEO.

“We plan to first tap markets in Central America, including Chile, Colombia, Brazil, Argentina and Mexico, and move on to Southeast Asia,” Lee said, adding that warm climate countries with skin exposure throughout the year are key markets for Prinker.

SketchOn’s broader vision does not stop at merely printing out temporary tattoos for fun. The firm believes its device can have broader usages, such as replacing paper tickets or bracelets used to enter festivals, amusement parks or nightclubs with a QR code directly printed on the body.

The firm also has a long-term vision in health care. For instance, it is mulling plans to develop a special ink that changes colors depending on temperature in order to create a safe and fun “thermometer tattoo” for children.

Inks that can detect and signify the delivery of drugs into the body or detect drops in blood sugar levels are other potential development directions for Prinker, Lee said.