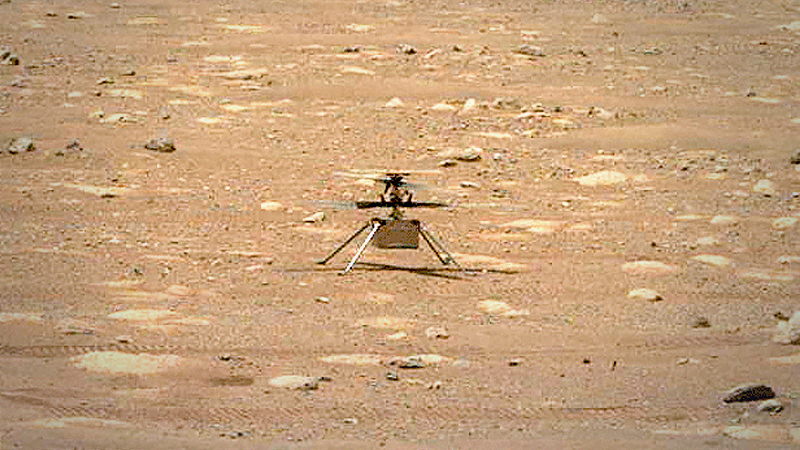 NASA is preparing to fly the Ingenuity helicopter on Mars, in an otherworldly Wright brothers moment

They landed a car-size rover on Mars, and the brilliant, if cheeky, engineers at NASA's Jet Propulsion Laboratory even snuck a coded message into the parachute used to slow it down for a soft landing that read, "Dare Mighty Things."

Now comes what the space agency says will be a "Wright brothers" moment on Mars: the first powered flight of an aircraft on another planet.

It won't fly far, just to the height of a basketball rim and down, a short hop that should take about 40 seconds. But the autonomous flight of a tiny helicopter called Ingenuity would mark a first in interplanetary travel, demonstrate a new technology and pave the way for scientists and explorers to more quickly traverse the surface of the Red Planet.

Originally expected to happen as early as Sunday, the flight was postponed until no earlier than Wednesday after a problem during a test of spinning the rotor blades at full power. In a statement Saturday, NASA said, "The helicopter is safe and healthy and communicated its full telemetry set to Earth." But it is diagnosing the problem before running another test.

The flight will be a technology demonstration add-on to the main feature of the mission - the Perseverance rover, a four-wheeled vehicle designed to explore the landscape of a crater that once held water and could yield clues about the possibility of ancient life there.

The rover is outfitted with all sorts of cameras and sensors that can zoom in on rock formations and collect data about the planet's landscape and climate. "Reading the geological history embedded in its rocks will give scientists a richer sense of what the planet was like in its distant past," NASA said.

Perseverance carried Ingenuity with it, a tiny offspring clinging to the under-carriage of the rover during the seven-month, 300-million-mile journey, the white knuckled landing through Mars's atmosphere and the frigid Martian nights since.

Now it's almost ready for its first flight.

"It could be an amazing day," Tim Canham, NASA's Ingenuity operations lead, told reporters Friday. "We're all nervous, but we have confidence that we put in the work and the time and we have the right people to do the job."

Ingenuity is a sprite of a helicopter, just four-pounds, with four pointy legs, two rotor blades that whirl at blinding speed in opposite directions, a solar panel and a fuselage packed with avionics designed to help it navigate the thin Martian atmosphere - another marvel to emerge from the labs at NASA's Jet Propulsion Laboratory.

It's no easy feat, flying a helicopter on Mars. The reduced gravity - about one-third of Earth's - will help it take off and stay aloft. But the paucity of the Martian atmosphere, just 1% of the density of Earth's, doesn't give the blades much to chew on as they try to gain purchase for liftoff.

"That's the equivalent of about 100,000 feet of altitude on Earth, or three times the height of Mount Everest," said MiMi Aung, NASA's Ingenuity project manager. "We don't generally fly things that high."

Commercial airliners fly at about 35,000 feet above the Earth, she noted, adding: "There were some people who doubted we could generate enough lift to fly in that thin Martian atmosphere."

The twin blades can spin incredibly fast, 2,400 rotations per minute, and were designed to propel the drone-like Ingenuity off the ground. "Those blades are not something off the shelf," she said. "They are really fine-tuned to maximize the lift that we can generate in such a thin atmosphere."

If successful, Ingenuity's flight would come nearly 120 years after the Wright brothers' first flight of a plane above the beach in North Carolina. Nothing like Kitty Hawk, Ingenuity's airfield is a dusty, rock-strewn, barren strip of land that is flat enough, NASA hopes, for takeoff and landing.

Designed as a test vehicle, Ingenuity is "in the long tradition of experimental aircraft that started with the Wright brothers, who were able to bring aerial mobility as a dimension for us to be able to travel here on Earth," NASA's Bob Balaram, the chief engineer of the Mars helicopter project, said in a news briefing last month. "In the same way, we are hoping that Ingenuity also allows us to expand and open up aerial mobility on Mars."

As a tribute to the Wright brothers, Ingenuity has a postage-stamp-size bit of fabric from the brothers' aircraft attached to a cable under the solar panel.

In 1903, the Wright brothers' first flight went about 120 feet. Ingenuity's first flight won't go that far. Initially it plans to lift off, rise to about 10 feet, hover for some 30 seconds and come back down.

If all goes according to plan, the helicopter could make as many as five flights, each one more ambitious than the last. The second, for example, would fly slightly higher, to 16 feet, and then horizontally for a little bit before returning to the landing site.

The Perseverance rover will assist in Ingenuity's flight, attempting to document it and relay signals back to Earth.

Ingenuity is a side benefit to the mission, a technology demonstration that could pave the way for more aircraft on Mars in the future that "could provide a supporting role as robotic scouts, surveying terrain from above," NASA said.

"It's a high-risk, high-reward approach that allows us to test capabilities we can improve on later, which could also advance science on future missions," said Lori Glaze, director of NASA's planetary science division.