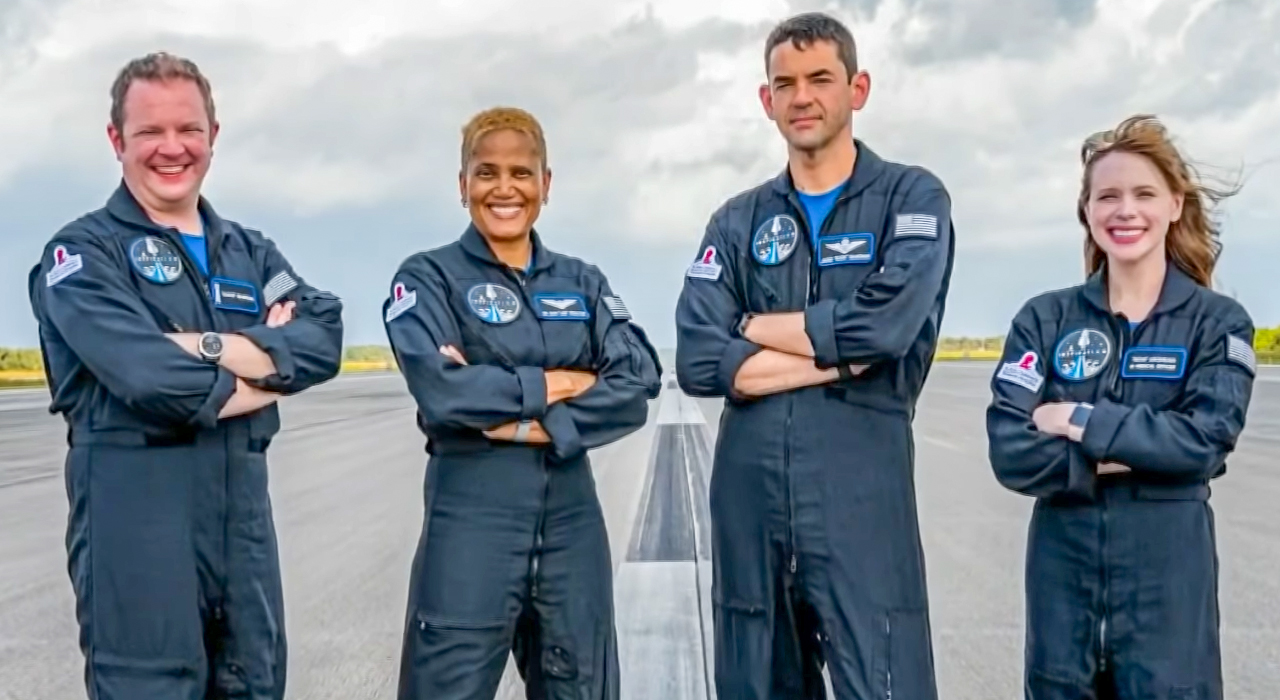 They could be your neighbors and theyre going to space. SpaceX gets ready to fly the Inspiration4 crew.

None of the crew has ever been to space before. Not the spacecrafts commander, a high school dropout. Not the pilot of the mission. The medical officer is a childhood cancer survivor who has a prosthetic in her leg. The fourth crew member lucked into the seat after a friend backed out.

This unorthodox mix of would-be explorers, all strangers until just a few months ago, from different walks of life, will make history as early as Tuesday evening as the first all-civilian group of astronauts. Their mission is scheduled to last longer than John Glenn's Mercury mission and to soar higher than any human spaceflight since the Apollo era. And for this flight, NASA is just a bystander.

If all goes to plan, the Inspiration4 flight would usher in a new era of human space exploration. It is yet another sign of the growth of the commercial space industry and the rapid erosion of governments' long-held monopoly on spaceflight.

While the rocket will blast off from NASA's Kennedy Space Center, the space agency that put men on the moon and helped build a space station that has orbited Earth for two decades won't be involved in what will be the first fully commercial spaceflight to orbit the earth.

The rocket and autonomous spacecraft are owned and operated by Elon Musk's SpaceX, not NASA. The endeavor is being funded by billionaire entrepreneur Jared Isaacman, not the government. The soon-to-be astronauts have trained for months, not years. And they did it at SpaceX's facilities in Hawthorne, Calif., instead of Houston, where for decades NASA's astronauts have endured a gauntlet of tests and training before being allowed to board a rocket to space.

Two of the Inspiration4 crew were chosen by winning a sweepstakes that was publicized through a commercial that ran during the Super Bowl this year.

While several private citizens have launched to orbit before, they have always had professional astronauts to guide them, or take over in the event of an emergency. Not on this flight. The crew of Inspiration4 will be on its own, spending three days inside SpaceX's Crew Dragon capsule, which has about as much room as a big SUV.

"The flight marks a transition in human spaceflight from public to private," said John Logsdon, professor emeritus of George Washington University's Space Policy Institute and a space historian. "It's like somebody going out and renting a self-steering yacht and sailing off into space."

It is a mission far more daring, and dangerous, than the recent suborbital space tourism missions that billionaires Richard Branson and Jeff Bezos recently flew. Those barely scratched the edge of space before falling back to earth after spending just a few minutes in a weightless environment and traveling about Mach 3, or three times the speed of sound. (Bezos owns The Washington Post.)

The Inspiration4 crew will reach orbit, traveling at 17,500 mph circling the globe every 90 minutes. They'll also reach an altitude of about 360 miles, higher than the International Space Station, higher than the Hubble Space Telescope and higher than any human spaceflight mission to Earth orbit except for Gemini 10 and 11 in 1966.

"It should afford the Inspiration4 crew a truly inspiring view - one only rivaled by two Gemini crews and the 24 Apollo moon-bound astronauts," said Robert Pearlman, the editor of collectSPACE.com, a space history news site.

The purpose of the flight, at least in part, goes to the essence of exploration - to show it can be done. To prove that a group of nonprofessional astronauts can board a private spacecraft and blast off into orbit for three days. And to prove that a private company can ferry them safely to and from orbit, as if they were crossing the Atlantic.

The flight, which is also the subject of a series airing on Netflix, has been designed to raise money for the St. Jude Children's Research Hospital. Isaacman, 38, who has not disclosed how much he paid for the mission, kicked off the campaign with a $100 million donation and is hoping to raise as much as double that.

A high school dropout who started his company at age 16, Isaacman became a billionaire with Shift4 Payments, a payments processing behemoth. He's a lifelong aviation enthusiast who started flying at an early age and soon grew from flying Cessnas to jets to even fighter jets. He's competed in aerial acrobatic competitions and founded Draken International, which provides fighter jet training for the military and defense industry customers.

The first member he picked to be part of the mission is Hayley Arceneaux, a 29-year-old from Memphis who works as a physician assistant. As a child, she was treated for bone cancer at St. Jude and made it her goal to work there and help others. As a result of her cancer, she had to have a rod put in her leg, making her the first person with a prosthetic to go to space.

When told she was chosen for the mission, she asked, "Are we going to the moon?"

The other crew members, Sian Proctor and Chris Sembroski, won their seats through competitions. Proctor, 51, an artist, poet and college professor from Phoenix, won by using Shift4′s software to build an online store and create a video outlining her space dreams. Sembroski, a 41-year-old father of two from Everett, Wash., won by donating to the St. Jude fundraiser. A friend of his was initially chosen for the seat but backed out and offered it to Sembroski.

To prepare for the flight, the Inspiration4 crew flew a Zero-G flight, an airplane that flies in parabolic arcs that create weightlessness for a few minutes at a time. They spent time in a centrifuge to get accustomed to the excessive gravitational forces they'll experience during the flight. And to bond, they went on a camping trip on Mount Ranier. "We are going to work on getting comfortable being uncomfortable," Isaacman said before the climb.

And they have spent many hours at SpaceX headquarters going over emergency procedures and familiarizing themselves with the controls of the spacecraft.

But if all goes well, the Dragon spacecraft will fly itself. The cargo version has been doing that for years, autonomously meeting and docking with the International Space Station before coming back to Earth. And the Crew Dragon version has now flown three sets of astronauts to the station. During the first test flight with a crew on board, NASA astronauts Bob Behnken and Doug Hurley took controls to test them out. But for the most part, the vehicle has flown unpiloted.

The Inspiration4 crew is not the first nongovernment trained people to go to space, of course. In the early days of the space shuttle, NASA expected to fly so frequently that it would be able to accommodate ordinary people. It decided that first a teacher should fly, then a journalist and then possibly an artist.

Before people from those professions could fly, a couple of congressmen went first, then-Sen. Jack Garn, R-Utah, and then-Rep. Bill Nelson, D-Fla., who now serves as the NASA administrator.

Finally, in 1986, NASA flew the teacher it had selected, Christa McAuliffe, from Concord, N.H. She quickly became an inspiration to school kids across the country and was a source of optimism that soon many others like her would get the chance to go to space.

But she and the six other members of her crew were killed when the space shuttle Challenger exploded shortly after lifting off from the Kennedy Space Center. NASA ended its "spaceflight participant program" and never flew the journalist or the artist.

In the 2000s, eight wealthy individuals paid $20 million or more for rides to the space station, flying on Russian spacecraft, since NASA prohibited the practice. The space agency has since changed course and is now allowing private citizens to book rides to the station on SpaceX and Boeing, the two companies that hold the contracts to fly crewed missions there. A Houston-based company known as Axiom Space has seized the opportunity and has already booked a few private astronaut flights to the space station, the first coming as soon as January.

On those missions the customers, who are paying about $55 million each for about a week stay on the station, would be accompanied by a former NASA astronaut to help guide them and serve as a commander.

The flights all mark an important new chapter in the history of human spaceflight, said Alan Ladwig, who ran NASA's spaceflight participant program in the 1980s, and wrote a book, "See You in Orbit?" about the history of private spaceflight.

"It's important because finally after almost 70 years of discussion of how it wouldn't be long before we could all fly in space, it is finally happening for civilians," he said.

For now, though, it remains something only the very wealthy can do. Even the suborbital tourists missions that Bezos's Blue Origin space company and Branson's Virgin Galactic are pricey. One person paid $28 million in an auction to fly on Blue Origin's New Shepard rocket, though regular ticket prices have not been announced. Virgin Galactic is charging $450,000 a seat.

But the Inspiration4 mission is of particular importance because three of the crew members are not wealthy, Ladwig said.

"They're not billionaires," he said. "They are people that could be our neighbors, people you went to school with, people you work with. And for them to get this opportunity is pretty fantastic."