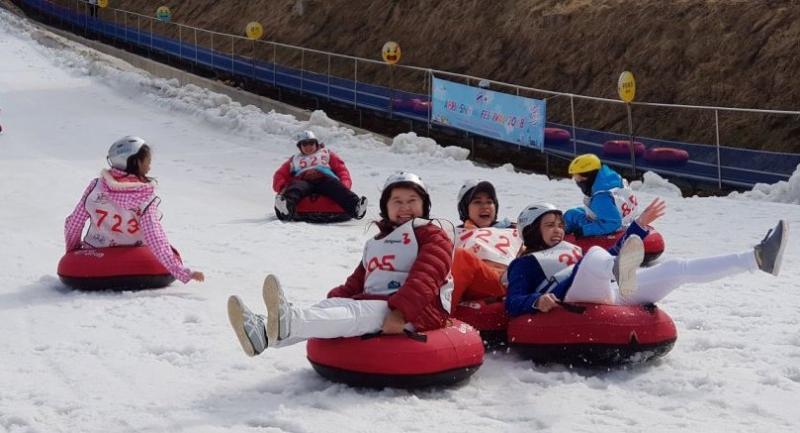 Tumbling in the snow

THREE HOURS from Seoul, South Korea’s biggest ski resort Yongpyong in Kangwon province is crowded with Thais. It’s the Songkran festival back home but hundreds have headed here, not to splash each other with water but to enjoy the last moments of winter at the April Snow Festival. Held annually from April 13 to 15, it’s designed for Thai tourists and offers them not just a chance to escape the heat but also to have fun in the snow and take part in sled competitions.
Spring has come to Yongpyong and the air temperature is a relatively balmy 14 degrees Celsius, but as we approach the resort, we can see the white slopes surrounded by trees. This is the sixth edition of the festival initiated by Korean Tourism Organisation in cooperation with Yong Pyong Resort and this trip has drawn 700 Thais to, quite literally, chill.

Joung Jin Su, director of the KTO’s Theme Tourism Product Development Team, says the project actually dates back to 1998 when the Fun Ski Festival was introduced to attract tourists from Taiwan and Hong Kong. At that time, the festival was held during the winter when the entire area is blanketed by snow. Back then, the programme featured a three-night, four-day stay complete with skiing lessons and competitions and a farewell dinner party.
Six years ago, the KTO decided to doff its cap to Thai tourists with an April Snow festival.
“Every year, we would see Koreans escape the winter chill by flying to Thailand, so I thought why not bring Thais here during the hot summer to enjoy playing in the snow,” he says.
The KTO chose Yongpyong Resort, which is known to Thais for its appearances in such popular Korean dramas as “Winter Love Song”. At first, the resort was worried that there wouldn’t be enough snow but resolved the problem by “re-mining” – bringing in snow from higher-altitude slopes and building a 1.2 metre-high sledding slope in time for April 13 to 15.
“I know Thai tourists go to Japan to ski. I wanted them to come here too,” he says.
Most Thais come with their families so the sledding competition is categorised by gender and age. That means all members of the family from kids up to grandparents can enjoy the competition, which sees them sledding down the slope and controlling the sled sufficiently well to pick up the item placed at the finishing line.
The timing is good too as it falls right in the middle of Thailand’s long summer school break.
Here for the first time, the Wanitlertthanasan family from Chiang Mai is surprised to see only Thais taking part in the competition. Their youngest son has a go and comes back with a prize.

The staff reminds young contestants to hold the sled tightly before heading down the slope.

“This is great fun. It’s nice for the kids to be able to play in the snow. Usually, we can only go to ski resorts during the New Year holidays,” says mother Sirikorn.
The Fudkal family from Nakhon Pathom is in South Korea for the first time. The mother wins the first place in the female adult competition and her little boy takes second place in his category.
They too are surprised to find only fellow Thais at the resort but think it’s a great idea. The family often goes to the Kiroro Resort in Hokkaido to ski but says they are thoroughly enjoying the sledding at the April Snow festival, not least because it allows them to mix with other people.
“It’s fun. I wouldn’t be able to chat with other competitors if the race was open to everyone,” says young Ratchanon.
“But I won’t know what the reward until this evening at the farewell party,” he adds.
After the competition in the afternoon, they walk back to the hotel for a rest before gathering at the farewell party. This includes a kimbab-making competition where families help each other to perfect the Korean rice roll, with the best winning a reward, and a performance by the well-known “Jump” show.
Joining the April Snow festival means buying a package tour in Thailand as the event is not open to individual travellers.
“We’ve had emails from individual travellers wanting to book but we don’t accept direct reservations, If they want to join, they should contact the tour agent in Thailand,” says Lee Sung Jae, a member of the resort’s sales and marketing team.
“The package makes sense as it includes a lot of activities as well as the details of where and how to take part. Individual travellers don’t have access to that information,” he explains.

After the sledding competition, Thai visitors gather at the farewell party where they take part in making kimbap.

Song Yong Kwan from TNT Korea Travel who is the escort for the Thai media trip explains further, saying that travellers coming with a local tour agent like TNT benefit from transport to and from the resort.
The April Snow package includes breakfast, a one-night stay, the competition and the party. Optional activities are also provided at extra cost including riding the gondola lift to the ski slopes on the mountain or playing in the indoor water theme park.
Six years ago, the festival attracted 1,300 Thais and this year attracted some 10 per cent more.
KTO’s Joung adds that he hopes to add a snowman experience next year in the hope that it can attract more Thai people to visit the festival.
“Last year it rained, so they were disappointed not to be able to play in the snow,” he laments.
The resort’s Lee Sung Jae adds that the resort can handle around 400 tourists for the competition but points out that it would be hard to extend the festival beyond three days. Joung nods his agreement but says they can split the competition into morning and afternoon sessions to serve more tourists.
And potential punters can rest assured that it will remain a purely Thai affair.

Around 20 minutes from the Yongpyong resort is the Daekwanryeong Lamb Farm where visitors can have fun feeding the lambs.
“It’s the low season here. Korean schools start in March and we can’t expand the festival to other Southeast Asian countries because they don’t have long holidays in this period. In any case, it would be hard to handle if we had more than one country.”
The first day of the April Snow Festival on April 13 ends with glee and the tourists are ready to leave for the next destination in the morning. The next batch of 240 Thais who arrive on April 14 aren’t quite so lucky. Rain starts falling in the morning and continues throughout the day. Unable to sled, they are offered a ride in the gondola lift to the top of the mountain or can play in the water theme park for free. They can also visit other nearby attractions nearby like the Daekwanryeong Lamb Farm. A 20-minute trip from the resort, the farm allows visitors to feed the lambs with grass and take a tour to many of the familiar locations of such films and TV series as “Saimdang, Memoir of Colours” and Welcome to Dongmakgol”.