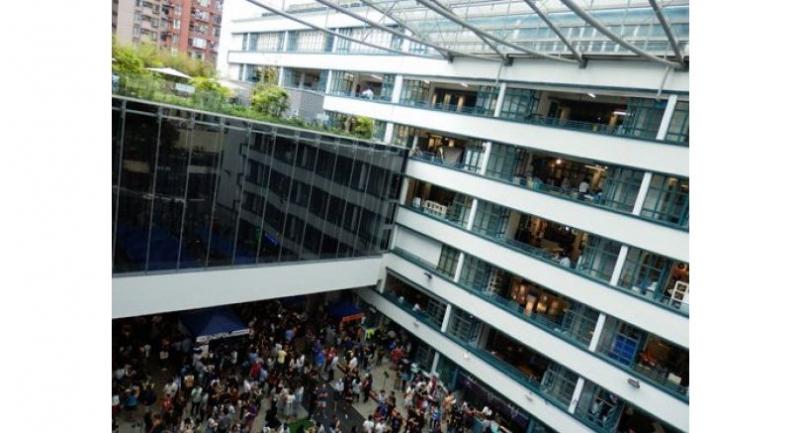 The long arm of the law

A popular destination with Thais, Hong Kong has a well-deserved reputation as a shopping mecca. But it’s also a great place to discover art, design and culture and the best way of doing this is by taking a stroll through Old Town Central towards the historic site-turned-creative hub PMQ.

Old Town Central brings together unique tourism hotspots in both Central and Sheung Wan districts and the Hong Kong Tourism Board has designed five themed walking tours – “Tasting Hong Kong”, “Time Traveller”, “Crazy for Art”, “Treasure Hunt” and “Something for Everyone” – to offer visitors endless avenues as they experience the vast and vibrant Central district. The attractions include but are not limited to colonial monuments, temples, art galleries, antique stores, street art displays, popular restaurants, rooftop bars and local delicacies.

I choose to set out on Hollywood Road, one of the first roads built in the city and home to a canvas of graffiti and street art, most of it tucked away in the streets and alleys that intersect the road.
The first piece of street art that I come across is Alex Croft’s colourful mural of old townhouses on Graham Street, which is very popular on social media. Next up are Danish urban contemporary artist Christian Storm’s eye-catching mural of two koi swimming on a wall on Shing Wong Street, which combines his trademark geometric elements with Chinese culture, and Japanese artist Shingo Katori’s “Large Mouth Dragon Boy” on Shelley Street, his first artwork accessible to the public outside Japan. Wanting to bring good fortune to Hong Kong and visitors from around the world, he decided on a lively colourful dragon, a powerful symbol in feng shui.

I’m so engrossed in admiring the street art that I don’t realise how far I have walked until I reach Aberdeen Street from where it’s an uphill trek to PMQ, one of the biggest conservation projects in recent Hong Kong history.
“The revitalisation project has kept something of the original,” says Chuek Yiu Wong, senior executive of corporate communication and tourism marketing at PMQ Management and also my guide.

Before it was revitalised into a centre for all things creative and design-based, the PMQ was known as the former Police Married Quarters. It housed the very first dormitory open to junior Chinese police officers from 1951 to 2000, as well as the Central School, the first government school to provide Western education to the Chinese from 1884 to 1944. Its alumni include the founding father of the Republic of China Sun Yatsen, casino tycoon Stanley Ho, and businessman Lee Hysan.

After it was destroyed in World War II, the 6,000-square-metre site was developed as the first dormitory for married Chinese police officers and their families, with two seven-storey buildings housing single and double rooms accessed from an open-air corridor.
Architecturally, the buildings have remained as they were with retaining walls, granite steps, and relics, and with the residential units converted into an eclectic mix of boutiques, studios, and cafes. Interiors remain simple with concrete walls painted white while window frames and railings have been restored to their original teal colour. A newly constructed bridge linking the two parallel buildings over a central courtyard doubles as an indoor event space and rooftop garden.

In 2014, the hub was opened with more than 100 retail-studio units and 15 pop-ups of around 40 square metres each, along with a multifunction event space called The Qube. Old residential units have been converted into small boutiques and design studios selling handmade products from jewellery to homeware. Pop-up stores from international designers are also a common occurrence at PMQ and the regular night markets are particularly popular among design enthusiasts.

I have lunch at the cat-themed Garden Meow restaurant before wandering around several shops on the ground floor. I stop at Gong Fu Teahouse, which enthusiastically cultivates the Gong Fu tea arts culture and holds regular tea arts workshops. Found Muji prides itself on being the first independent store in Hong Kong to make use of various raw materials and traditional technology to remake discarded items into goods that fit the modern life while sustaining the craftsmanship and value. Sukigi Swim boasts swimwear that has been thoughtfully designed to bring character and femininity to each costume. Kapok, meanwhile, has an authentic yet approachable take on fashion and design.

The second floor is home to Harrison Wong with original contemporary apparel and accessories for urban males and KMC Design, which makes unique innovative jade jewellery with an oriental touch. Up another flight of stairs is Bamboa Home, purveyor of green eco-products made of locally harvested bamboo, BlkSheep Empire Footwear, which brings an explosion of colour and textures to shoes, and Waka Artisans showcasing the very best of Japanese culture through hand crafted ceramics.

The fourth floor hosts the premises of Vanessa Tao who strives to capture the feeling of life and energy in light and effortless garments, Cilocala offering sneakers and rucksacks, Eravolution, a multidisciplinary design studio for architecture, furniture and homeware. Up on the fifth, I wander into 513 Paint Shop, a boutique offering environmentally safe and green house paints for homes and interiors and look at AaaM, a studio that believes architecture is an network of ideas encapsulating urban conditions, public interests, political agenda, snapshots of technologies and philosophies. I linger at Taste Library and browse briefly through its collection of 3,000 books covering different food cultures from around the globe and finish my tour with Lumio on the sixth floor, which gives people the freedom to experience beautiful lighting.

PMQ also offers “Hong Kong on Steps”, an unique art project that brings together local and overseas artists from Taiwan, Japan, South Korea, France and Hong Kong to create stair paintings inspired by the vibrant and diverse Hong Kong landscape.
“PMQ serves as a platform to connect local design talents to both local and international markets. In order to help local talents to continue to grow and flourish, PMQ provides rental discounts and also sponsors the designers to participate in different overseas trade shows and fashion shows, which helps them gain international exposure,” says Chuek Yiu.
“Since our opening in 2014, the designers have been able to continue to make and develop substantial and steady progress.”

- To get there, take Exit 1 of MTR Sheung Wan Station, turn right on to Des Voeux Road Central, then right to Gilman’s Bazaar. Go straight towards Queen’s Road Central. Walk along Aberdeen Street for around seven minutes to reach PMQ.

- Or take Exit C from MTR Central Station Exit C and walk along Des Voeux Road to the Hang Seng Bank Headquarters, which is linked to the Central–Mid-Levels Escalator. Take the escalator to Staunton Street and turn right. PMQ is about three minutes on foot.