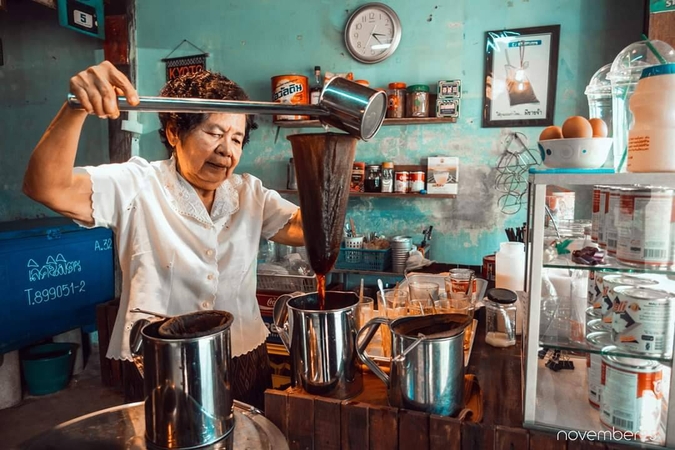 Though never famous as a great tourist destination, Chaiyaphum has always been a province worthy of a visit, especially during the New Year holidays.

The primary aim of my trip to this northeastern province was to make merit and be blessed at the Nong Bua Khok temple in Chatturat district. It is an old temple whose Buddha statue -- called “Luang Por Petch” -- and a model of the Buddha’s footprint, are sacred to the locals.

Also, I participated in the off-season robes offering ceremony, together with the local people. The ceremony urges people to contribute money to the temple.

As the temple or village liaison prodded the people to offer more by announcing “there is still time left for contributions”, more people get up to make their offerings. Some old people contributed more than once with smiles on their faces.

After the divine obeisance, I visited Par (aunt) Ti’s coffee shop, which was about half a kilometre distance from the Nong Bua Khok temple. The shop is a two-storey wooden house, and its owner, Aunt Ti, is 70 years old.

The owner told me and other customers that she had been selling coffee since 1969 -- when the price of a cup was just Bt1.50. Today, she charges Bt20 per cup.

She likes to take photos with her customers, and asked me to take a photograph with her to show that I had visited her coffee shop.

Aunt Ti’s coffee is strong, sweet and creamy. But, if told, she can make coffee with different levels of sweetness.

From Aunt Ti’s, I headed towards Nong Dong temple. My aim in visiting the temple was to participate in “Fang Luuk Nimit”, or inauguration ceremony.

This ceremony is organised during the New Year, as workers come back from the city to spend time with their families.

The ceremony is organised to consecrate a Buddhist temple. A sacred marker sphere, or “Luuk Nimit”, has to be buried in the temple compound as a ritual.
Buddhist people believe that they should attend a temple inauguration ceremony at least once in a lifetime, because the participants will receive a lot of merit by taking part in this ceremony.
Several Buddhists from Chaiyaphum and nearby provinces flocked to attend this ceremony.

While the sphere is buried, devotees drop notebooks, pencils and threads in the sacred marker sphere’s hole in front of the “Ubosot”, or the temple’s main chapel. Dropping these items, it is believed, will make the person smart.

The participants cover the entire sacred marker sphere with gold leaves and make a wish for prosperity in life.
The last place I visited was the local community in Ban Phet sub-district. Its highlight is the almost 100-year-old wooden houses that are a great draw for tourists to take photos.

However, the number of houses with antique value are rapidly going down as most house owners have already renovated their houses with cement.

This community was located near the Bamnet Narong District Office with various shops and modern buildings to welcome tourists.