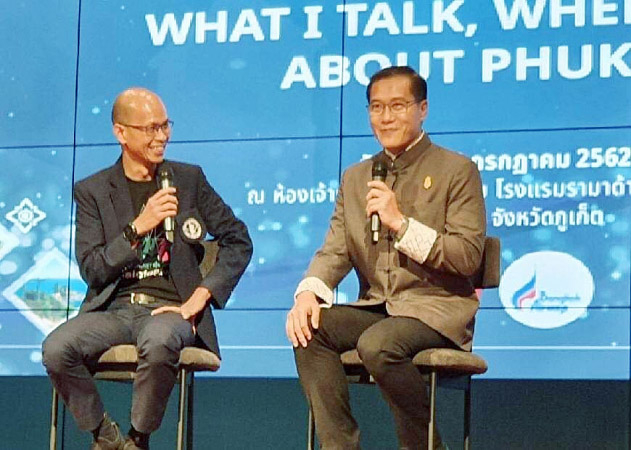 Former tourism and sports minister Weerasuk Kowsurat has offered advice to the Phuket tourism sector on taking the travel trade on the resort island to the next level.

Speaking at a recent seminar titled “What I Say When I Talk about Phuket”, Weerasuk noted that the number of conventional tourists visiting Phuket has stabilised, perhaps due to the global economic situation, but said tour businesses should meanwhile continue improving their services and responding to complaints.

Currently 60 per cent of the island’s visitors are engaged in “foreign individual tourism” (FIT), a segment difficult to monitor and collect data on regarding people’s behaviour and preferences.

These are travellers who tend to avoid the primary attractions and stay in unregistered hotels, under the radar of state agencies and private travel associations. They base their choices on the advice of “influencers” found on social media.

To offset the impact FIT travel has on conventional tourism businesses, Weerasuk suggested that the Phuket Travel Association open membership to entrepreneurs newly setting up shop on the island and everyone living or just visiting there, as well as local businesspeople.

It could thus continue adding to its travel database and gauge the number of tourist arrivals more accurately.

The scale of the hotel business must be pinned down, he said. It should be determined whether such operations are legal and all should be identified on GPS maps – with a red pin for those unregistered, a yellow pin for those in the process of registering and a green pin for those registered.

With a comprehensive picture, measures could be taken against the illegal accommodations.

Weerasuk said it’s too expensive to travel around Phuket via public transportation, a result of poor management and poor law enforcement. It’s a drawback widely discussed on social media, which could be beneficial in forcing transport companies to address the issue.

He also recommended that the Phuket Chamber of Commerce coordinate efforts to establish a one-stop-service office where investors could receive guidance.

And the tourism association should develop ways for visitors to submit complaints online and search social networks for consumer advice in dealing with problems that arise.

Weerasuk said Phuket is a great location for filmmakers, in itself a boon to tourism, but it needs its own set of regulations as to where movies can be shot safely and legally.

He suggested that tour businesses, increasingly reliant on Chinese visitors, broaden their capabilities in Mandarin, seek out and hire travel agencies in China to bring them customers, and ensure low prices while improving services.

Weerasuk believes the next big sources of tourists will be India and Russia, while the market elsewhere in Asia should also be cultivated because it’s been overlooked for too long.

He warned, though, against cutting prices too low in response to increasing competition. It will harm the industry in the future, he said.