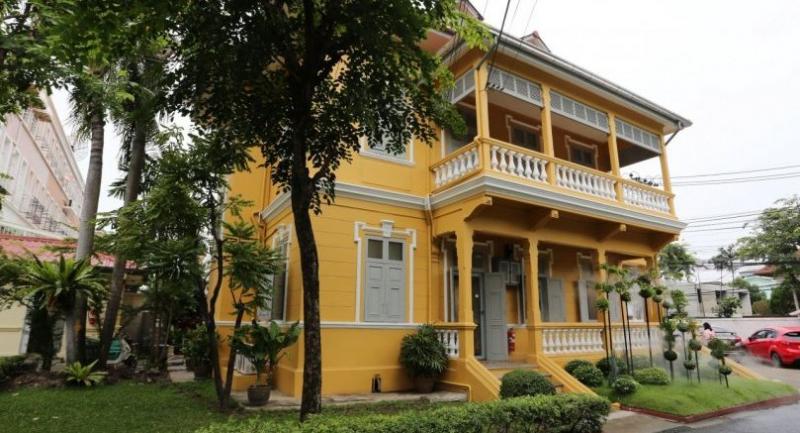 THERE’S MORE to the Army Internal Audit Office in Bangkok than just requests for government services. There’s a house in the same compound next to the Sang Hi Bridge on Ratchawithee Road where Silpa Bhirasri, the father of Thai modern art, once lived.
Professor Silpa, the Italian sculptor born Corrado Feroci in 1892, came to Siam at age 31 as a court artist and later laid the foundation for Silpakorn University, Thailand’s first institute dedicated to the fine arts.
The neo-Renaissance former residence was renovated two years ago, the exterior given a coat of mustard-coloured paint. Further work has been done this year and it now welcomes visitors daily.

Professor Silpa Bhirasri – revered as the father of Thai modern art – once lived in this neo-Renaissance building.

There’s even a branch of Craftsman Roastery, which tends to locate its coffee-and-sweets outlets in historic buildings.
The real reward, though, is in seeing some of Silpa’s sculptures up close, as well as photos of him and his family that are assumed to have been taken on the grounds.
Ajarn Farang, as his students called him, is a commanding presence upstairs in statue form, and you can also see the prototypes for his statues of King Rama VI and another art master of the day, Prince Narisara Nuvadtivongs.

Samples of his masterpieces are on view along with books detailing his contribution to Thai art.

More vintage photos depict Silpa with his masterpieces, such as the statue of King Taksin that stands at Wongwien Yai in Thon Buri and the Walking Buddha statue at Buddhamonthon in Nakhon Pathom.
Inside glass cabinets are books on his life and work. Elsewhere, two rooms are ready to house temporary exhibitions.
Chatchanok Dulyarat, who manages the house, cites a document recording Silpa’s appointment as a sculptor with the Fine Arts Department in 1924. He signed a three-year contract on a salary of Bt800 a month – a substantial sum for the time.

The house has retained as much of its original charm as was possible.

“The department rented this house for him and he lived here for eight years before moving to a permanent residence on Silom Road,” Chatchanok says.
Silpa once mentioned the address in a letter – 395 Ratchawithee Road – but it was only two years ago that the building was identified. Silpakorn students led by Prasopchai Saengprapha found the house and verified it was the right place by examining photos and archived interviews with people who worked with Silpa.
The Army compound occupies the site of the residence of Phraya Burutratana Ratchaphanlop (Nop Krairerk), who was a royal page under King Rama V. The King gave this forefather of the Krairerk family money to build a home at the end of Ratchawithee Road, within convenient distance of the palace.

Nop Krairerk had a main mansion and three smaller buildings erected in the Victorian Renaissance style, and it was one of the smaller structures that the Fine Arts Department rented for Silpa. The department registered the site for its historical value in 1978, the year before the Army Internal Audit Office moved in.
The office and Silpakorn University split the cost of renovating Silpa’s former residence and opened it to the public, but it was closed after a year for lack of visitors. Chatchanok came along at the beginning of this year, signed a three-year contract with the Army office, and is drumming up interest again.

The house has been renovated as a living museum dedicated to the life and work of the revered Italian master.

“Silpakorn University was my alma mater,” says the Faculty of Education graduate. “I didn’t have the chance to learn directly from Ajarn Silpa, but he is the inspiration for all the students at the school to this day, so he was in a way my revered teacher too.
“I don’t want to see his former residence being ignored. My passion is to make it a living museum and a gathering centre for art lovers. I want to echo Ajarn Silpa’s motto, ‘Life is too short – art is longer.’”
Further renovations took four months and the house reopened to the pubic in late June.

Inside are a lovely cafe and two rooms that will serve as galleries.

“Ajarn Silpa lived here while he was making the statue of King Rama I that stands on the Phra Phutta Yodfa Bridge, which brought him fame and recognition in the Kingdom,” says Chatchanok. “And this is where his son Romano was born. There’s a picture of Ajarn Silpa, his wife Fanni Viviani and their children Isabella and Romano in front of a house that we believe is this one.”
Born to a merchant family in Florence, Italy, Corrado Feroci showed artistic inclinations at an early age. He graduated from the Royal Art Academy of Florence and then taught there from 1914 to 1923.

Silpa and his family appear in photos believed taken in front of the house.

His life changed dramatically when King Rama VI asked the Italian government to appoint him to teach members of Siam’s Fine Arts Department about Western sculpture.
Silpa established Thailand’s first school of fine arts in 1933 and it became Silpakorn University in 1943, with him serving as dean.
When Italy surrendered to the Allies during World War II – in that same year, 1943 – Feroci changed his name to Silpa Bhirasri and took Thai nationality to avoid being arrested by the Japanese army then occupying Thailand.

The original house is seen in a vintage photo.

He remained in the Kingdom until his death in 1962, having given the Thai people the Democracy and Victory monuments in Bangkok, King Naresuan’s monument in Suphan Buri and the Thao Suranari monument in Nakhon Ratchasima.
Chatchanok is planning a series of rotating temporary exhibitions and art workshops. “The Bangkok Sketcher Group was here recently drawing pictures of the house,” she says.

Craftsman Roastery has livened up the place, too. The chain is best known for its popular Coffee Craftsman x Yarden on Yen Akat Road, housed in a renovated century-old house.

“Craftsman at Silpa Bhirasri’s Place” has filtered coffee made with Kenyan, Costa Rican and Panamanian beans for Bt150 to Bt250 and espresso made with beans from Mae Hong Son that are honey-roasted.

BY ROYAL COMMAND
Silpa Bhirasri’s House (Baan Ajarn Farang) is in the compound of the Army Internal Audit Office, next to Sang Hi Bridge on Ratchawithee Road in Bangkok.
It’s open daily from 7 to 7 and there’s no admission charge.
For details about the house, call (095) 969 6519.
Craftsman Roastery has a Facebook page by that name.