Etran (Thailand), a startup in innovative electric motorcycles, has unveiled its latest product driven by clean energy as the Department of Land Transportation announced that motorcycles in Thailand produce 50,000 tonnes of CO2 emission per day, or over 18 million tonnes a year.

The new “Etran Kraf Limited Edition” is an environmental-friendly, high performance electric motorcycle with a 40Ah battery, 7kW motor, 180 km maximum riding distance per charge, and 130 km/hour maximum speed. The main components of the motorcycle are made with carbon fibre for strength and lightweight characteristics. Carbon fibre is a popular material among supercars. The model uses Internet of Vehicles (IoV) technology to connect the vehicles with Etran mobile application to enhance customer experience and safety. 300 units are currently available, it is priced at Bt150,000 ($4,7000), excluding VAT.

The startup also noted that “Etran Prom” version 2 will soon be unveiled. The first model,  launched in 2017,  mainly targted the motorcycle taxi segment.

The brand and logo of the company have been redesigned to align with the company's  direction. Aiming for 200,000 units in sale in 10 years, Etran was  recently awarded APAC25 by Cleantech Group, a San Francisco-based company that supports the development and commercialisation of clean technologies.

Soranun Choochut, CEO and Founder of Etran (Thailand) Co Ltd, said that Thailand has close to 22 million motorcycles, according to data of  the Department of Land Transport.  With a single motorcycle emitting  45 gram of CO2 per kilometre daily on average and if an average motorcyclist travels 50 kilometers per day, he/she will produce over 2 kilogramme of CO2. Taking all into accounts, Thai motorcycles produce roughly 50,000 tonnes of CO2 per day, or 18 million tonne per year. As such. the atmosphere will need 3 billion, 6-metre tall trees to offset the amount of CO2. 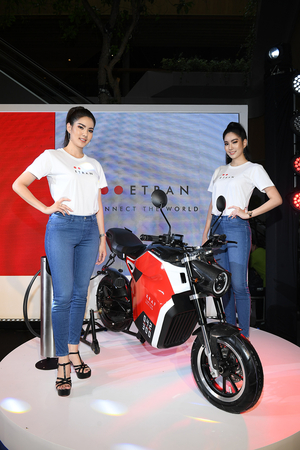 Etran was established with the philosophy  “Drive a better world”. In 2017, Etran launched “Etran Prom”, first in the world designed for motorcycle taxi market. Etran Prom was  not only environmental-friendly, but also solved the problem for motorcycle taxi passengers by splitting the seats and giving more leg rooms. Another important milestone for Etran was signing a M0U with PTT Plc on  studying the electric vehicle market as well as developing electric motorcycle and prototypes for charging stations.

Etran partners with SakunC Innovation, one of the leading manufacturers with world class capability in producing automobile parts with ISO 9001:2015. The frame of  Etran Kraf Limited Edition’s is 100 per-cent aluminum and produced with high precision advance robot welding technology. For this limited edition, Etran will release 300 units in three series and seven colours with serial number on the side of the motorcycle. It will go on sale in the first quarter of  next year.

In regard to service and charging station, Etran is in discussion with the PTT Group to expand the charging station network across all high populated areas, both indoor and outdoor. The charging stations will use Type2 technology with maximum current at 36A, compatible to all Etran vehicles and other electric vehicles in the market.

It targets sale of 200,000 units or 1 per cent of market share for its electric motorcycles within the next 10 years.