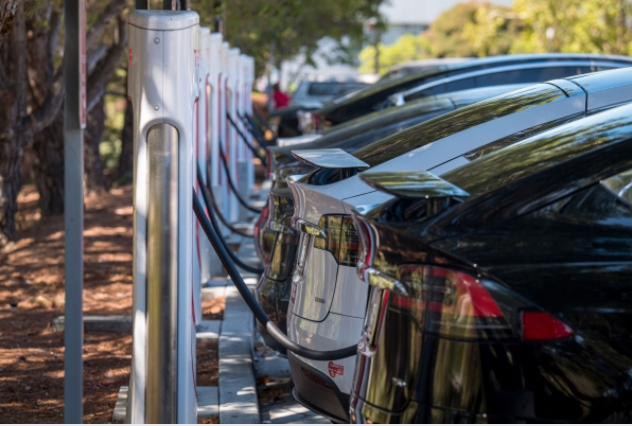 Tesla has thrilled some investors and jarred others by soaring to a valuation of as much as $649 billion, more than what the world's seven largest carmakers were collectively worth at the beginning of this year. The company is now comfortably in a category by itself, defying even Chief Executive Officer Elon Musk's warnings. "I

actually said the stock is too high a long time ago," Musk said at the start of December. "But they didn't listen to me."

For startups aiming to mimic Musk's success and for traditional carmakers struggling to disrupt themselves, most lingering doubts about future demand for electric vehicles have dissipated. Thanks in large part to the Tesla phenomenon, a consensus has emerged that they are undeniably the future.

"What you've had is a greater realization of the inevitability" of EVs, said Michael Pye, an investment manager at Baillie Gifford, which oversees about $370 billion and is one of the biggest shareholders of both Tesla and China-based EV maker Nio. Ten years from now, "it's likely we'll look back on this as the electric decade."

Tesla alone has not brought the world to this point. A mix of stricter regulations against internal-combustion cars, increased support for plug-in vehicle purchases, improvements in technology and benefits of scale have led more consumers to embrace electrics. Still, two big questions remain: Can any other startup meaningfully replicate Tesla's success? And will the EV market grow quickly enough to support both incumbents and startups?

The dramatic rise and fall of Nikola over just a few months was this year's cautionary tale. The company founded by entrepreneur Trevor Milton set out to transform the trucking industry by replacing the diesels in big rigs with batteries and fuel cells. It also said it would build a hydrogen-station network and charge customers upfront for refueling.

In June, Nikola went public by merging with a special purpose acquisition company, or SPAC, led by a former vice chairman of General Motors. Optimism that the infusion of cash would help the startup begin to produce trucks briefly sent its valuation soaring past Ford's. The stock collapsed by September after a short seller claimed Nikola had deceived investors about its technology; the company has denied this. Regulators opened investigations, and Milton left the company.

Nikola's breakdown hasn't deterred other SPACs. The so-called blank-check firms have raised $70 billion in 2020 - a fivefold increase from 2019 - and at least 15 EV companies have been taken public or have listings pending. Those that already made their debut include Lordstown Motors, which has said it will begin producing its Endurance electric pickup in September 2021, and Fisker, whose Ocean SUV is planned for 2022.

"I have had very credible people, with very large sums of money, DM me on Twitter to see if we'd be interested in working with their SPAC," said Gene Berdichevsky, CEO of Sila Nanotechnologies, a California-based battery company, and ex-Tesla engineer. The blank-check company board member who messaged him reached out in early October, after Nikola's implosion.

Tesla shares started their meteoric rise in late 2019, when Musk proved he could not only dominate the nascent EV market but also make a small amount of money in the process. The company got on a roll by accelerating production of Model 3 sedans in China and Model Y crossovers in California and has now recorded five consecutive quarterly profits.

Companies getting in on the coinciding EV stock-buying bonanza include XPeng, the Guangzhou-based company co-founded by He Xiaopeng, the billionaire behind one of China's most popular mobile browsers. Within three months after its U.S. listing in August, the stock almost quintupled.

"We have been talking about our goals of penetration and growth for the past five years," said Brian Gu, the vice chairman and president of XPeng. "Yet we hadn't seen the real explosion until this year. There's an increased confidence in the industry's long-term growth."

Even so, XPeng won't appear high up on global sales charts anytime soon. Bloomberg Intelligence analysts estimate the company will deliver about 25,000 P7 sedans and G3 SUVs this year. Its market cap still managed to reach $53 billion last month, a valuation Ford hasn't seen in several years. Entering December, investors were awarding the company about $1.7 million of market cap per vehicle it's expected to sell this year. If the same multiple were applied to Volkswagen, the German giant would be worth about $15.5 trillion. Instead, it's being valued at about $10,000 per vehicle.

VW wasn't alone in watching its valuation take a hit from the biggest disruption to auto-industry output since World War II. Vehicle sales in some markets were almost completely wiped out for the month of April. By June, the industry had taken on $72 billion of new debt to cope.

But amid all the carnage, EVs outperformed. It hasn't mattered that the price of oil crashed and remains depressed. China stepped in with a series of measures that supported plug-in car purchases, while Germany and France started offering subsidies to help boost automakers out of their slump.

"If historically low oil prices, a major economic downturn, a plunge in auto sales and all these other factors didn't derail the growth, it gets harder to see what does," said Colin McKerracher, head of advanced transport for BloombergNEF. "The trajectory is getting clearer and clearer, and all these factors that might have derailed things are sort of bouncing off and not landing a blow."

The current quarter may well be the first ever in which automakers sell 1 million fully electric and plug-in hybrid vehicles worldwide. It took the industry until 2015 to get its first million on the road. The global fleet is now about to cross the 10 million mark. "Each order of magnitude, a different number of people become aware that this shift is happening," McKerracher said. "EVs have become part of the general consciousness instead of the consciousness of a small number of people who care about them."

Conventional carmakers are benefiting somewhat from the bump in EV demand, too, but only a handful have seen their shares rise meaningfully this year. Companies including GM and Daimler are getting credit for undergoing metamorphoses, though they have spent more than a century basing manufacturing, labor and retailing practices on the internal-combustion engine.

GM's stock got a boost when it told investors in November that it would spend $27 billion introducing 30 battery-powered models by 2025, increasing its budget by more than a third. But it's going through an awkward process of buying out some Cadillac dealers that aren't on board with the shift.

Daimler, which envisions more than half of its global sales being electrified by the end of the decade, will have to overcome labor-union opposition to shrinking its variations of combustion engines by 70%. Workers protested last month after the leader of a powertrain plant Daimler is retooling for EVs left the company for Tesla.

Musk may have ambitions to dominate Daimler's home market of Germany and the rest of Europe, but the growth that has the region rivaling China for the first time this year has been driven by incumbents. In the U.S., GM and Ford have electric pickups in the works and have successfully defended that segment - far and away their most lucrative - from Toyota and others.

"I would not underestimate traditional OEMs in this area," said Christina Woon, a Singapore-based investment manager at Aberdeen Standard Investments, which manages about $563 billion in global assets, including Toyota shares. "Having an existing business that's profitable and that has cash flows that you can use to invest in a new or emerging business - that does help to balance out that risk."

No automotive CEO has been as supportive and openly admiring of Musk and Tesla as VW's Herbert Diess. He joined the company just before its 2015 diesel-emissions scandal and has remained consistent in his message about and moves toward electrification. During a two-hour briefing last month on the massive spending VW has planned for the next half-decade, Tesla's name came up 31 times.

"We think it's a very important competitor" because Musk is "really pulling the industry," Diess said in an interview last month. "Coming from a software background, he has capabilities which we still have to build up. He's a reference for us."

But VW unintentionally echoed a troubling time for Tesla when launching a crucial new electric model this year. When software issues plagued the launch of the German carmaker's ID.3, it hired a contractor to fix thousands of the electric hatchbacks in a tent, then rushed them to sale before some features were ready. The episode was reminiscent of when Tesla erected a structure in its parking lot two years ago during its struggle to get Model 3 sedans out the factory door.

As rough as the ID.3 launch was, Diess is starting to see some payoff. The car outsold all other EVs across Europe in November. Analysts at Evercore ISI predict that VW and Tesla will form a global EV duopoly for the foreseeable future. Baillie Gifford's Pye credits VW for grasping where the industry is headed. In his view, too many of its peers still don't.

"If you're about to be run over by a 40-ton semi, don't lie down in the middle of the road and smile," Pye said. Even for those who "have got the gist of that," like VW, "whether they're able to act on it or not within the required time frame is more challenging."