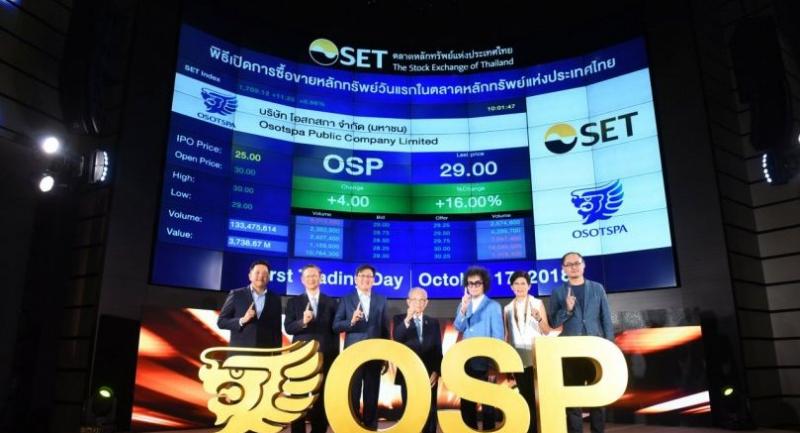 SHARES in Osotspa Plc, which makes the popular energy drink M-150, rose 9 per cent at the close of trade in their debut on the Thai stock exchange yesterday.

The company’s executives have forecast higher income and profits this year on the back of improved purchasing power and the resumption of operations at its glass bottle plant.
Elsewhere in the market, a maker of glass products under Bangkok Glass Group, BG Container Glass Plc (BGC), majority-held by Thailand's beer-making giant Boon Rawd Brewery, will make its debut on the Thai bourse today.
Osotspa opened at Bt30 per share, 20 per cent above its Bt25 initial public offering price. The stock dropped to a low of Bt27 before closing the day at Bt27.25, with an active trading volume of Bt10.75 billion. The average trade price was Bt28.48.
Niti Osathanugrah, a major shareholder in OSP, had sold 36 big-lot transactions of 135.16 million shares to institutional investors at Bt25 apiece for Bt3.38 billion in total.
Petch Osathanugrah, chief executive officer of OSP, said that about Bt2.42 billion of the Bt12.67 billion proceeds through the IPO will be used to finance construction of a new energy drink plant in Myanmar with estimated production start in the fourth quarter of next year, the construction of a Babi Mild baby powder plant as well as for improvements to production efficiency and debt repayment.
OSP also plans to expand in neighbouring countries and has been studying market expansion plans in Vietnam and China.
Porntida Boonsa, chief financial officer of OSP, said that company expected to see higher income and net profit this year . Last year, the company booked income of Bt26.21 billion and Bt2.94 billion in net profit.
Although OSP recorded a year-on-year decline in its income for the first half of this year due to the temporary shutdown of its glass container plant for maintenance, a better result is expected in the second half the glass container plant has resumed operation, she said. First-half income stood at Bt12.54 billion with Bt1.47 billion in net profit .
Surin Osathanugrah, OSP chairman, said that the company started from a small pharmaceutical shop in 1891 and has now been in business for 127 years.
Today, BGC will start trading of its shares on the Thai exchange. The company has set an initial public offering of 194.44 million shares at Bt10.20 each.