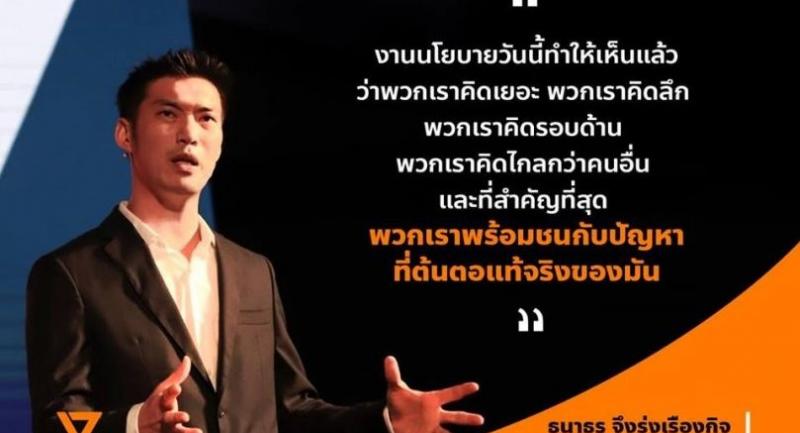 ECONOMISTS have welcomed policies proposed by rival political parties in the run-up to general election, but they are sceptical about the financing plans and their effective implementation.

The Democrat Party last week announced six key economic policies to address the needs of low-income groups at around the same time as arch-rival Pheu Thai unveiled its broad policies. The previous week, the debutante Future Forward Party had put forward bold proposals to address the widening inequality in society.

Future Forward Party (FWP) announced that, if elected, it would reform the political and economic structures, which currently tend to favour centralisation and economic monopoly. It also plans to empower people via state welfare and educational reform.

“The FWP has a clear concept and almost all of its proposals have the potential to structurally narrow the disparity of income,” said Somchai Jitsuchon, research director at the Thailand Development Research Institute. But if the party does not have a clear majority, how will it compromise on its agenda with another party participating in a coalition government Somchai asked

Regarding the state welfare proposal made by the party, Somchai said a universal grant of Bt1,200 a month to support a child up to six years of age was outstanding. He, however, was doubtful about grants of Bt2,000 to support those aged between 18 and 22, asking what was its purpose. Cash handouts of Bt1,800 a month for the elderly might be too high and it would result in a budget burden in the long run, he said. The party should encourage people to save for their retirement, he suggested. The party is also proposing to expand social security coverage but has yet to provide details on how it would do so. Past governments have tried and failed, Somchai noted.

The FWP estimated that its proposed universal welfare would cost about Bt650 billion annually. To finance its plan, it intended to cut 30 per cent of the defence budget and reduce tax incentives offered by the Board of Investment to investors. The party also wants to reduce the tax allowance offered by the Revenue Department. It proposes to increase building and land tax rates, and legalise underground lottery.

Somchai expressed support for the financing plan and suggested that the party increase the rate of value-added tax for a welfare state.

Regarding the Democrat Party’s policy platform, Somchai said he agreed with the income guarantee proposal, saying that it would be a first step to reduce income inequality. However, the general public knows little about it and the party could face strong opposition, he said.

The Democrats plan to introduce a minimum income guarantee for rice farmers, rubber farmers and oil palm growers. Somchai said an income guarantee of Bt10,000 per month for workers may be too high and it could strain the budget, as the amount would be higher than the current minimum wage. If the party aims to cover only workers in the formal sector, then the impact would be limited. The proposal to offer cash handouts of Bt1,000 to senior citizens could be practically implemented, compared to what is being proposed by the FWP, he said.

He backed the Democrat proposal for capitalisation of land title deeds, similar to what former premier Thaksin Shinawatra’s administration had implemented.

The proposal for a community water fund is interesting, he said, but the Democrats must provide more details. He expressed support for education reform proposed by the Democrats, which could lead to narrowing of income inequality. The plan to give every child Bt1,000 a month until age eight he found a welcome proposal.

Anusorn Tamajai, dean of economics at Rangsit University, said there was little contrast between the rival parties in most of the policies announced, since so many were aimed at reducing income inequality. But expanding the government’s role would run into financial difficulties, he warned. He agreed with the Pheu Thai plan to expand the role of the people and private companies. To empower people, the next government will have to reduce its own role. Deregulation would also encourage businesses to play a greater role in helping theeconomy, he said.

Pawin Siriprapanukul, an economics lecturer at Thammasat University, said social and other spending proposals made by the parties could lead to burgeoning public debt, well beyond the current level of 42 per cent of gross domestic product. He said he did not agree with many of the cash handout proposals, adding the next government must ensure productive spending. He also called for debate on increasing the tax on asset ownership, such as implementation of capital gains tax. Currently those who sell shares in the capital market are exempted from capital gains tax.