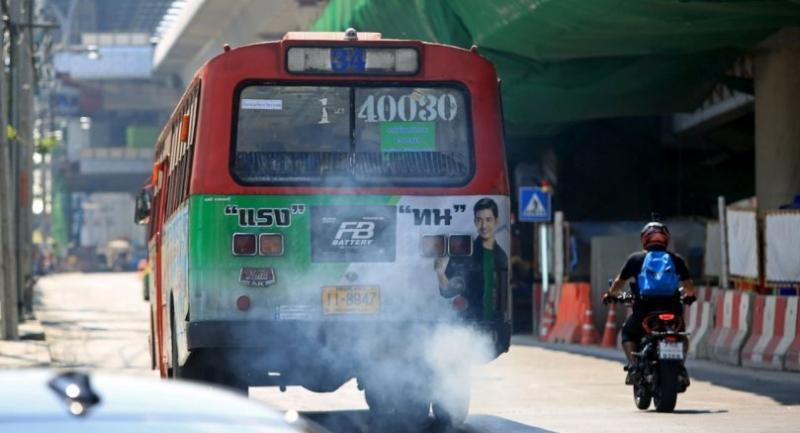 THE SEVERITY of Bangkok’s air pollution suggests that the national government’s pursuit of a “low-carbon economy” has fallen short of needs, say experts, who recommend higher taxes on “dirty fuel” and a reduction in the number of vehicles on city streets.

Like other countries, Thailand has incorporated the low-carbon economy model in policies, aiming for sustainable development and better public health.

The Finance Ministry has already introduced excise taxes on vehicles that vary with emission levels and successive governments have endorsed railway projects such as the mass transit system in Bangkok. The Energy Ministry plans to use more renewable-energy fuels to produce electricity in place of natural gas and coal.

Praipol Koomsup, an economist specialising in energy issues, said the high level of air pollution in Bangkok indicates that that the country has not yet done enough to make the low-carbon economy a reality.

One of several key contributors to the pollution problem is the estimated 2.5 million diesel-powered trucks and buses still on city roads. Diesel engines produce a significant amount of the PM2.5 – particulate matter less than 2.5 microns in diameter – currently putting health at risk in Bangkok.

Praipol backs the idea of government subsidies for people willing to buy electric vehicles, the cost of which remains high.

“The government plans to increase the amount of renewable fuel for producing electricity from about 10 per cent to 20 per cent in the next 20 years. That is our target and we need to do a lot to achieve it,” he said.

Thanawat Polvichai, director of the Economic and Business Forecasting Centre at the University of the Thai Chamber of Commerce, estimated that the air pollution could cost Bangkok businesses Bt5 billion to Bt10 billion because, among other issues, no one wants to linger at open-air food stalls.

But Thanawat expects the crisis’ impact on the overall economy to be short-lived.

Speaking at a recent Thailand Development Research Institute seminar on “air pollution as a negative impact of development”, Adis Israngkura, an economist involved in national resources and the environment, urged the government to raise the tax ante.

It should review the excise tax system and make it clear to people that pollution will be taxed heavily to discourage the use of dirty fuels such as diesel.

Cities need to be reorganised

The current tax rate on diesel fuel doesn’t reflect the serious impact of air pollution, Adis said, advocating a higher annual road tax on ageing vehicles as well because their engines’ efficiency degrades over time and they cause more pollution.

Adis believes the government is on the right track with its policies on sustainable development, but it needs to do more. Prime Minister Prayut Chan-o-cha chairs a committee overseeing the effort, he noted, but “Prayut could take more action”.

Chamnong Sorapipatana, chairman of the energy division at the Asian Transportation Research Society, noted that construction of the mass-transit rail system in itself causes traffic jams, adding to pollution.

Construction work should be done at night, he said, or suspended until the middle of March when weather conditions aren’t trapping pollution over the city. After winter, the upper air will be cooler, allowing the pollution to rise and escape, Chamnong said.

But in the long run, Bangkok and other cities need more green spaces and should be reorganised to lessen travel distances, he added.

Sumet Ongkittikul, a research director at the TDRI engaged in transportation and logistics policy, said the government should limit the number of cars in Bangkok. It has moved too slowly on this, he said, in the hope that more people will voluntarily begin using public transport once the new rail lines are completed in Bangkok in three to five years.

Sumet pointed out, though, that other countries have found people do not switch to public transit without some prodding. Increasing the cost of owning a car would be one incentive. Singapore limits vehicle numbers by auctioning off licence plates and imposes high fees for allowing access to restricted areas. Hong Kong and London also impose tough rules on car owners, he added.