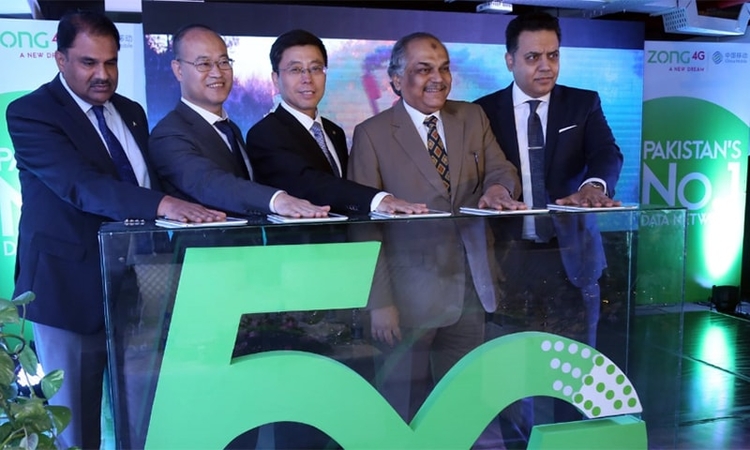 By doing so, Zong has become "the first and only operator to officially test 5G services in the country", the statement added.

An official from Zong while speaking to DawnNewsTVexplained that while 4G speeds cover a bandwidth of 50-100mb/s, 5G will deliver at least 1GB/s. He said that in today's trials, a speed of 1.14 GB/s was achieved.

"This success marks an important milestone in Pakistan's telecom sector," said Zong CEO Wang Hua at an event in Islamabad held to conduct the test.

"5G will herald a new era in Pakistan's social and economic sectors," he added.

According to the company's handout, "Zong believes that 5G will bring more profound and long-term changes to Pakistan's economic transformation, social progress, and people's livelihood improvement in future. It is expected that 5G will have an impact on health care, agriculture and education."

The Zong CEO also announced that the company will establish a 5G innovation centre in Pakistan in collaboration with Huawei, for which a Memorandum of Understanding (MoU) was also signed at the event.

He reminded the audience that five years ago, it was CMPak that had first brought 4G technology to Pakistan. Hua said that the introduction of 5G services is an important pillar to meet future technological needs.

PTA chairman retired Maj Gen Amir Azeem Bajwa also spoke on the occasion. "The country will soon be able to enjoy 5G services which will be introduced for commercial purposes," he said.

He said that the Authority was making efforts in this regard and recognises that the introduction of 5G services would bring in a technological revolution.

Telecommunication Division Secretary Shoaib Siddiqui lauded the efforts by PTA and congratulated CMPak on becoming the first to have the achievement under their belt.

“I would like to take this moment in congratulating Zong for becoming the first Pakistani telecommunications operator to have successfully conducted the 5G trial and putting Pakistan on a short-list of countries which are 5G ready,” he said.

"Zong is an important part of the ties that bind the two countries together," added Siddiqui.

The IT secretary said that the government aims to bring in other major developments via the Information Technology sector as well. "It is the right of every Pakistani to be able to compete in terms of technology with the developed countries of the world," he added.