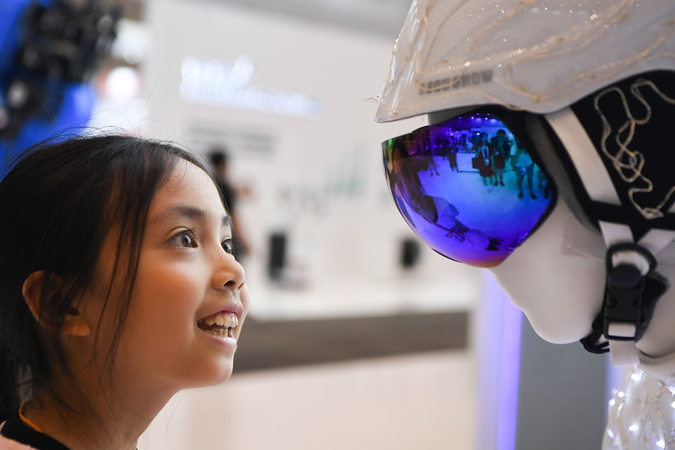 A child gets a preview of an automaton at the venue of the 2019 Smart China Expo in Chongqing on Sunday. The four-day expo opened on Monday. [Photo/Xinhua]

China is willing to work with the international community to create an age of virtual intelligence and share outcomes of greater breakthroughs in smart technology, President Xi Jinping said on Monday.

Modern information technology, represented by the internet, big data and artificial intelligence, is witnessing rapid changes, Xi said in a congratulatory letter to the 2019 Smart China Expo, which opened in Chongqing on Monday and runs through Thursday.

A new round of scientific and technological revolution and industrial transformation is developing with strong momentum, and the fast growth of smart technology is having significant and far-reaching influence on economic development, social progress and global governance, Xi said.

The president emphasized that China attaches great importance to the development of smart technology and industrial digitalization, and advocates for forward-looking, in-depth integration of the digital economy and the real economy.

"Smart technology is developing very fast in China," Vice-Premier Liu He said at the opening ceremony.

"It has become a new, important economic growth point, with preliminary statistics showing that the total industrial scale of AI-related industries in China surpassed 500 billion yuan ($71.4 billion) in 2018."

As the gateway to Southwest China and a major industrial base, Chongqing, on the upper reaches of the Yangtze River, has established one of the world's largest IT industrial clusters and one of China's biggest auto manufacturing bases.

"No one country in the world can have all the resources, technology and capabilities to develop new generation science and technology. Industrial fragmentation and technological decoupling will eventually hurt the interests of mankind," Ma said at the expo.