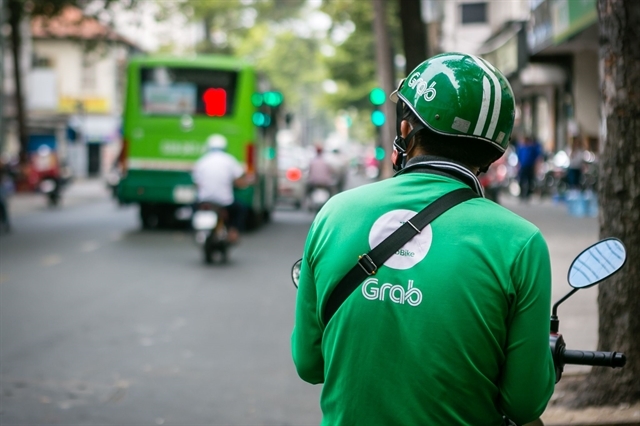 Grab has revealed the details of a large-scale investment designed to develop its foothold in the Vietnamese market over the next five years. Photo saigoneer.com.

HA NOI Ride-hailing firm Grab on Wednesday officially unveiled the details and scope of its planned investment in Viet Nam, saying it will devote US$500 million to expand its transport, food delivery and payment networks over a five-year period.

According to Grab, this investment will tap into opportunities in fintech, new mobility solutions and logistics in order to spur the development of Việt Nam’s digital economy and create millions of income opportunities that will elevate the quality of life of all Vietnamese people.

The investment will be in addition to the $200 million that Grab had already planned to invest in the Southeast Asian country by the end of this year, said Grab Vietnam's head Jerry Lim.

Grab also announced the implementation roadmap for its “Tech For Good” mission, with goals aligned with the policy priorities laid out in the Government's socio-economic plan for 2020.

The three main areas of focus will be contributing to reducing poverty, expanding the benefits of the digital economy to 63 provinces and cities nationwide and giving millions of Vietnamese people higher incomes by helping drivers, delivery partners and business partners become micro-businesses that co-operate on the Grab platform. Grab expects these activities to contribute to the national goal of reducing the urban unemployment rate to below 4 per cent.

The roadmap also includes building a skilled workforce with the expectation that it will continue to develop a contingent of engineers at the Research and Development (R&D) Centre in Viet Nam and investing in Vietnamese technology talent to tackle the biggest challenges in Southeast Asia through artificial intelligence (AI), big data, machine learning and more. Grab will also support the development of the country's technology start-up ecosystem through the Grab Ventures programme.

Grab said it was committed to a shared, seamless and smart mobility future for Viet Nam, including complimentary solutions to the existing public transport system and changing people's habits from private vehicle ownership to shared transport methods such as GrabBus, a marketplace for bus travel that will cater to mass-market consumers.

Russell Cohen, head of regional operations for Grab, said: "This investment is a reflection of our redoubled commitment to Viet Nam. The country’s rapidly developing economy and young, mobile-first population make it ripe for the adoption of digital services."

Grab has seen significant development since entering Viet Nam in 2014. Payments through Moca, its e-payment partner, grew by 150 per cent in the first six months of this year, while the number of monthly active mobile users has grown by more than 70 per cent.

During the reviewed period, GrabFood saw the number of transactions quadruple to an average of 300,000 orders per day. Grab said its driver-partners in Việt Nam have earned a total of almost $1 billion in the last five years.

"Competition in ride-hailing will become fiercer," Reuters quoted HCM City-based economist Bùi Quang Tín as saying. "The size of the investment means Grab will be able to offer heavy discounts even if it risks losses in the short term."

In late July, the Singapore-based firm also said it would invest $2 billion in Indonesia over five years, where it aims to build a next-generation transport network and transform how critical services such as healthcare are delivered.