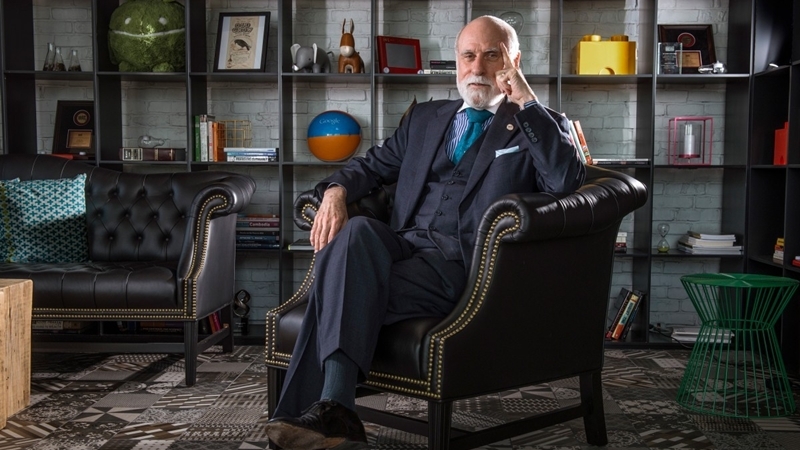 Internet pioneer Vinton Cerf in May 2015 at Google's offices in Washington, D.C. MUST CREDIT: Washington Post photo by Bill O'Leary

Coronavirus knocked down - at least for a time - internet pioneer Vinton Cerf, who offers this reflection on the experience: "I don't recommend it. . . It's very debilitating."

But Cerf, 76 and now recovering in his northern Virginia home, has better news to report about the computer network he and others spent much of their lives creating. Despite some problems, the Internet overall is handling unprecedented surges of demand as it helps keep a fractured world connected at a time of global catastrophe.

"This basic architecture is 50 years old, and everyone is online," Cerf noted in a video interview over Google Hangouts, with a mix of triumph and wonder in his voice. "And the thing is not collapsing."

The internet, born as a Pentagon project during some of the chillier years of the Cold War, has taken such a central role in 21st Century civilian society, culture and business that few pause any longer to appreciate its wonders - except perhaps, as in the past few weeks, when it becomes even more central to our lives.

Many facets of human life -- work, school, banking, shopping, flirting, live music, government services, chats with friends, calls to aging parents -- have moved online in this era of social distancing, all without breaking the network. It has groaned here and there, as anyone who has struggled through a glitchy video conference knows, but it has not failed.

"Resiliency and redundancy are very much a part of the Internet design," explained Cerf, whose passion for touting the wonders of computer networking prompted Google in 2005 to name him its "Chief Internet Evangelist," a title he still holds.

Comcast, the nation's largest source of residential internet, serving more than 26 million homes, reports that peak traffic was up by nearly one third in March, with some areas reaching as high as 60% above normal. Demand for online voice, video and VPN connections -- all staples of remote work - have surged, and peak usage hours have shifted from evenings, when people typically stream video for entertainment, to daytime work hours.

Concerns about such shifting demands prompted European officials to request downgrades in video streaming quality from major services such as Netflix and YouTube, and there have been some localized internet outages and other problems, including the breakage of a key transmission cable running down the West coast of Africa -- an incident with no connection to the coronavirus pandemic. Heavier use of home WiFi also has revealed frustrating limits to those networks.

But so far internet industry officials report that they've been able to manage the shifting loads and surges. To a substantial extent, the network has managed them automatically because its underlying protocols adapt to shifting conditions, working around trouble spots to find more efficient routes for data transmissions and managing glitches in a way that doesn't break connections entirely.

Some credit goes to Comcast, Google and the other giant, well-resourced corporations essential to the internet's operation today. But perhaps even more goes to the seminal engineers and scientists like Cerf, who for decades worked to create a particular kind of global network -- open, efficient, resilient and highly interoperable so anyone could join and nobody needed to be in charge.

"They're deservedly taking a bit of a moment for a high five right now," said Jason Livingood, a Comcast vice president who has briefed some members of the internet's founding generation about how the company has been handling increased demands.

Cerf was a driving force in developing key internet protocols in the 1970s, while working for Stanford University and, later, the Pentagon's Defense Advanced Research Projects Agency, which provided key early research funding but ultimately relinquished control of the network it spawned. He also was among a gang of self-described "Netheads" who led an insurgency against the dominant forces in telecommunications at the time, dubbed the "Bellheads" for their loyalty to the Bell Telephone Company and its legacy technologies.

Bell, which dominated U.S. telephone service until it was broken up in the 1980s, and the similar monopolies in other countries wanted to connect computers through a system much like their lucrative telephone systems, with fixed networks of connections run by central entities that could make all of the major technological decisions, control access and charge whatever the market - or government regulators - would allow.

The vision of the Netheads was comparatively anarchic, relying on a few key technological insights and a lot of faith in collaboration. The result was a network - or really, a network of networks - with no chief executive, no police, no taxman and no laws.

In their place were technical protocols, arrived at through a process for developing expert consensus, that offered anyone access to the digital world, from any properly configured device. Their numbers, once measured in the dozens, now rank in the tens of billions, including phones, televisions, cars, dams, drones, satellites, thermometers, garbage cans, refrigerators, watches and so much more.

This Netheads' idea of a globe-spanning network that no single company or government controlled goes a long way toward explaining why an Indonesian shopkeeper with a phone made in China can log onto an American social network to chat -- face to face and almost instantaneously -- with her friend in Nigeria. That capability still exists, even as much of the world has banned or restricted international travel.

"You're seeing a success story right now," said David Clark, a Massachusetts Institute of Technology computer scientist who worked on early internet protocols, speaking by the videoconferencing service Zoom. "If we didn't have the internet, we'd be in an incredibly different place right now. What if this had happened in the 1980s?"

Such a system carries a notable cost in terms of security and privacy, a fact the world rediscovers every time there's a major data breach, ransomware attack or controversy over the amount of information governments and private companies collect about anyone who's online - a category that includes more than half of the world's almost 8 billion people.

But the lack of a central authority is key to why the Internet works as well as it does, especially at times of unforeseen demands.

Some of the early internet architects -- Cerf among them, from his position at the Pentagon -- were determined to design a system that could continue operating through almost anything, including a nuclear attack from the Soviets.

That's one reason the system doesn't have any preferred path from Point A to Point B. It continuously calculates and recalculates the best route, and if something in the middle fails, the computers that calculate transmission paths find new routes - without having to ask anyone's permission to do so.

Steve Crocker, a networking pioneer like Cerf, compared this quality to that of a sponge, an organism whose functions are so widely distributed that breaking one part does not typically cause the entire organism to die.

"You can do damage to a portion of it, and the rest of it just lumbers forward," Crocker said, also speaking by Zoom.

Even more elementally, the Netheads believed in an innovation called "packet-switching," which broke from the telephone company's traditional model, called "circuit switching," that dedicated a line to a single conversation and left it open until the participants hung up.

The Netheads considered that terribly wasteful given that any conversation includes pauses or gaps that could be used to transmit data. Instead, they embraced a model in which all communications were broken into chunks, called packets, that continuously shuttled back and forth over shared lines, without pauses.

The computers at either end of these connections reassembled the packets into whatever they started as - emails, photos, articles or video - but the network itself didn't know or care what it was carrying. It just moved the packets around and let the recipient devices figure out what to do.

That simplicity, almost an intentional brainlessness at the Internet's most fundamental level, is a key to its adaptability. As many others have said, it's just a web of highways that everyone can use for almost any purpose they desire.

Many of the internet's founding generation have memories of trying to convince various Bellheads that packet-switching was the inevitable future of telecommunications - cheaper, faster, easier to scale and vastly more efficient and adaptable.

Those anecdotes all end the same way, with the telephone company titans of the day essentially treating the Netheads as precocious but fundamentally misguided children who, some day, might understand how telecommunications technology really worked. And several acknowledged they celebrated just a bit when the telephone companies gradually abandoned old-fashioned circuit-switching for what was called "Voice Over IP" or VoIP. It was essentially transmitting voice calls over the internet - using the same technical protocols that Cerf and others had developed decades earlier.

Leonard Kleinrock, one of three scientists credited with inventing the concept of packet switching in the 1960s, also was present for the first transmission on the rudimentary network that would, years later, become the Internet.

That was Oct. 29, 1969, and Kleinrock was a computer scientist at the University of California at Los Angeles. A student programmer tried to send the message "login" to a computer more than 300 miles away, at the Stanford Research Institute, but only got as far as the first two letters - "L" and "O" - before the connection crashed.

Retelling the story by phone, over a line using the internet's packet-switching technology instead of the one long preferred by the "Bellheads," he recalled his own experience in trying to convince some phone company executives that he had discovered a technology that would change the world.

And now, Kleinrock, 85 and staying home to minimize the risk of catching the coronavirus, and enjoying that his home internet connection is 2,000 times faster than the phone-booth sized communications device that internet pioneers used in 1969.

"The network," he said, "has been able to adapt in a beautiful way."