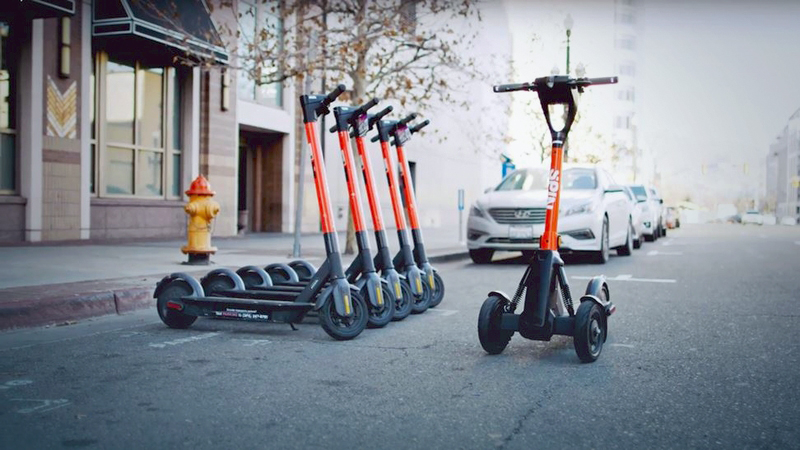 Ford-owned Spin is bringing remotely operated e-scooters to cities this year. MUST CREDIT: Photo by Spin

Almost as soon as the dockless rides came to the nation's metro areas in 2018, electric scooters by companies such as Bird and Lime wound up in parts of town that frustrated homeowners and public officials. Many of the early scooters were prone to break down and often ended up blocking sidewalks and roadways. Some e-scooter oppositionists and vigilantes tossed them into rivers and lakes as the last-mile convenience turned into a micromobility mess.

More than three years later, after government crackdowns and pedestrian collisions rattled scooter companies, e-scooters are being innovated. Companies are deploying pay-per-minute vehicles meant to keep people from abandoning them all over the place.

On Wednesday, Spin announced new tiny wheeled rides that allow scooter operators to remotely move the vehicles if they end up somewhere they are not supposed to be. The company chose Ninebot-Segway to build the bikes and the autonomous technology start-up Tortoise for the software. The companies say the development is key to creating more order in city streets.

"There has been a lot of fanfare around the potential of remote-controlled e-scooters, but this partnership marks a turning point . . . to bring them to city streets," Ben Bear, chief business officer at Spin, said in a statement.

Spin has been expanding and investing in new tech since Ford bought it in 2018 for a reported $100 million. Tortoise, a mobility software company founded in 2019, has regulatory approval to operate in 14 cities including an Atlanta suburb where it began testing last year. Segway, as a provider to Bird and Lime, says it has 70% of the global e-scooter hailing market.

Spin, Bird and Set are set to launch a pilot program in Boise, Idaho, where up to 250 three-wheelers can roam around town without a rider this spring. The test could lead to a future ride-hailing service with which people can use an app to summon an unmanned e-scooter to their doorstep, Spin says. The partnership was also created to address people littering public spaces with abandoned scooters.

The project follows product announcements from other micromobility companies seeking to solve the problem. On Monday, two Irish firms, Luna and Zipp, teamed up on next-generation rides that "know" whether they were parked improperly. The collaboration is meant to reduce insurance costs and municipal fines, the companies said. This month, TIER partnered with the mapping firm Fantasmo on a new scooter parking system that will allow users to end rides only within a specific area.

The companies are vying to inject more monitoring and safety into an industry beset by collisions and vandalism.

E-scooters sent 29,600 riders to the emergency room in 2019, up from 15,500 the year prior. Scores of people do not like them. They're at the center of content posted on an Instagram account dubbed "Bird Graveyard," where hundreds of photos and videos show people vandalizing e-scooters in public. The account has almost 100,000 followers.

Some e-scooter companies pay third-party firms to round up stray scooters each night and put them back in designated zones. Spin says it hopes its new remote-controlled fleet will cut back on operational costs associated with maintaining and repositioning e-scooters, which are worth a few hundred dollars apiece.

Despite setbacks, the industry shows promise. Estimated at $18.6 billion in 2019, the e-scooter market was projected to hit $20 billion in 2020. The pandemic held things up. But cities eventually closed off more streets to automobile traffic, making the rides part of their social distancing response and setting the groundwork for what could be a stronger e-scooter market in the years to come. The District of Columbia unveiled new legislation in October allowing the number of electric scooters and bicycles to double to 20,000 units by Oct. 1, 2023. San Francisco added another 500 approved Spin scooters this month to the 1,500 already allowed to whiz about town.

Spin's new three-wheeled scooters were built with enhanced suspension, machine learning capabilities and a set of cameras, the company says. The scooters weigh 77 pounds, and the third wheel is intended to avoid tipping, Spin says.

The vehicle's design, computer vision and connectivity enable Tortoise teleoperators to park the scooter in a higher-trafficked area immediately after a trip ends. If the e-scooter is abandoned on the sidewalk, the operator can use the camera feed to steer to a nearby spot that's less likely to cause a problem. Under Tortoise's control, the scooters can travel up to 3 miles per hour and have a 40-mile battery range.

It's unclear how the public will respond to scooters roaming around seemingly uncontrolled.

"That's one of the things we're excited to see," Bear says.

Spin hopes its remotely operated rides will enable the company to launch a scooter-hailing service by the end of 2021. The move would allow customers to request an e-scooter through an app. The announcement represents its latest attempt to innovate as it expands to new markets. In December, it announced plans to boost e-scooters with software that alerts pedestrians of sidewalk riders and plans to deploy them in New York this spring. Its parent company is also invested in software that will enable scooters to communicate with cars on the road through Bluetooth to cut down on accidents.