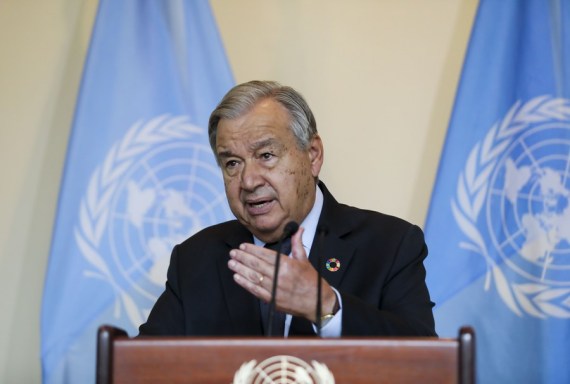 The Ethiopian Government announced on Sept. 30 that seven UN officials had been declared "persona non grata" and given 72 hours to leave the country.

United Nations Secretary-General Antonio Guterres said on Wednesday that Ethiopia has no right to expel UN staff and it is violating the international law in doing this.

In his right of reply at the Security Council meeting on Ethiopia, the top UN official said that "we believe that Ethiopia has not the right to expel these members of the UN."

"We believe Ethiopia is violating international law in doing so," he added.

Speaking directly to Ethiopia's permanent representative to the UN, Taye Atske Selassie, who was also in the Security Council chamber, the secretary-general said that "if there is any written document, provided by the Ethiopian Government to any UN institution, about any of the members of the UN that were expelled, I would like to receive a copy of that document, because I have not had any knowledge of any of them."

"It would be very useful for me to detect, if documents are given to the UN and not given to my knowledge, then I have to investigate what has happened in my organization," he added.

Guterres recalled that he "twice" told the Ethiopian prime minister that "if there were concerns about lack of, how to say, lack of impartiality of UN staff, that I asked him, please, send me those situations for me to be able to investigate. "

"Until now I have no response to these requests," he stressed.

"The people of Ethiopia are suffering. We have no other interest but to help stop that suffering," he said.

The Ethiopian Government announced on Sept. 30 that seven UN officials had been declared "persona non grata" and given 72 hours to leave the country.

UN chief calls for nuclear weapons to be eliminated

In meeting with UN chief, Qureshi calls for urgent action on humanitarian crisis in Afghanistan