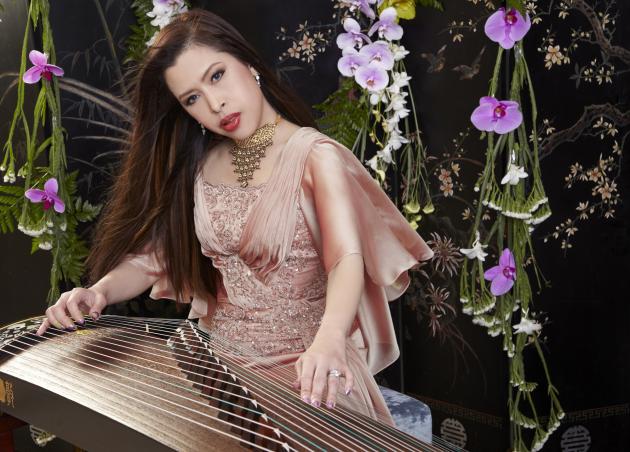 HRH Princess Chulabhorn, khon dancers and Chinese acrobats will perform together next month


Her Royal Highness Princess Chulabhorn will play the ancient Chinese guzheng as part of the fifth “Two Lands One Heart” cultural exchange from August 17 to 24, celebrating Thailand’s friendship with the People’s Republic.
Performances including the Princess playing the Chin Dynasty stringed instrument take place at the Thailand Cultural Centre in Bangkok on August 17 and 18, Khon Kaen University on August 21 and Srinakarinviroj University in Hat Yai on August 24.
Their Royal Highnesses Princesses Maha Chakri Sirindhorn and Soamsawali will attend the Bangkok shows, the former on August 17 and the latter on the 18th.
Princess Chulabhorn gave the press a preview at Siriraj Hospital’s Chalermprakiat Bulding last week, revealing that the melodic sound of the guzheng enchanted her the first time she heard it, on a visit to China 12 years ago.
She learned to place the venerable instrument of the imperial court and so impressed officials of the Chinese government that they suggested a musical exchange programme. China’s Culture Ministry and the Chulabhorn Research Institute take turns hosting the annual event.
Next month’s shows at all three locations will feature the Princess performing 10 songs – “Xi” (“Yesterday”), “Man Ywei” (“Full Moon”), “Spring River in the Moonlight”, “Luo Hua Fei” (“Falling Flowers”), “Lonely Night”, “Moonlight Lake”, “Perfect”, “Missing”, “Ri Luo Zhi Lian” (“Love at Sundown”) and “Zhong-Tai Yi Jia Qin” (“Two Lands One Heart”). Her guzheng teacher Chang Jing will join her for duets on some of the songs.
The Princess said she considers “Love at Sundown”, composed by His Majesty the King, as the highlight.
“This will be the first time the song will be performed on a guzheng,” she said. “It’s quite difficult to play on the guzheng because the instrument has only five notes, but we’ll have full orchestra support.”
Princess Chulabhorn said she prefers to practise in the serenity of the evening. She loves how the melodic sound of the guzheng resonates through the air.
Rounding out the show will be five Chinese cultural performances selected by the Princess, plus khon artists from Thailand’s Fine Arts Department presenting “Phra Rama at Sea”, a masked dance from the Ramakien.
From China, Xiuse is a song-and-dance ensemble from Shanghai’s Oriental Youth Dance Troupe. The Sunshine Girls do gymnastic acrobatics, Lady Yang and the Pearl Blossoms is part of the Beijing Opera. Ye Shen Chen is another singing and dancing troupe from Shanghai, and Pursuit offers acrobatics on bamboo poles.

Seats for the Bangkok shows cost Bt800 to Bt1,800 at the Chulabhorn Research Institute (call 02 574 0622) and www.ThaiTicketMajor.com.
Tickets in Khon Kaen and Hat Yai cost Bt400 to Bt1,500 and are available from the local governors’ offices.
Proceeds from ticket sales go to the Princess Mother’s Medical Volunteer Foundation.