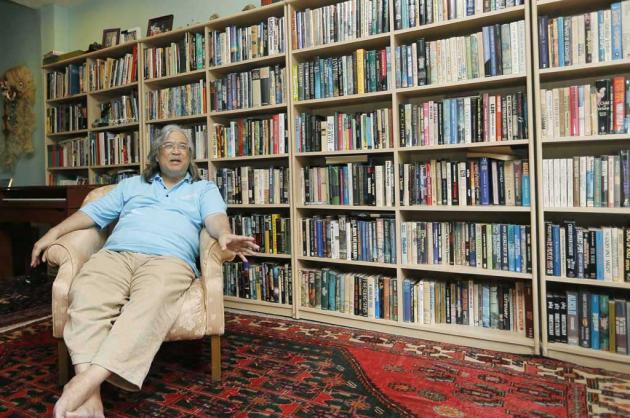 The internationally lauded Thai writer, composer and conductor gets some local recognition

Somtow Sucharitkul, an award-winning novelist and musical composer/conductor, once turned his back on his motherland, Thailand.
In the late 1970s, after returning to Thailand from Britain where he had been schooled at Eaton and Cambridge, Somtow jumped into pioneering a fusion of Thai-western instrumental melodies that he and some friends hoped would “revolutionise” Thailand’s music scene.
“It was very unpopular and everybody hated us,” Somtow, 60, recalls. “My reaction was to give up music.”
Somtow moved to the United States, took up American citizenship and became an author of science fiction, fantasy and horror novels, in English.
His prolific output of more than 30 novels included such diverse titles as “The Aquiliad”, “Vampire Junction”, “Moon Dance”, “The Other City of Angels”, “Anna and the Ripper of Siam” (unofficially banned in Thailand) and “Jasmine Nights” (semi-autobiographical).
They won him numerous American accolades, including the John W Campbell Award for the Best New Writer, the Locus Award and the World Fantasy Award.
But Thailand and his first |love for music eventually beckoned.
“I suddenly had a vision that I should enter a monastery,” Somtow says. He returned to Thailand in 2011 and became a Buddhist novice for a stint of fasting and meditation that was interrupted by the September 11 terrorist attacks in the US.
His response was to write a requiem which was performed by Thailand’s Mahidol University Music School orchestra in 2002.
A job as the school’s resident composer fell through, due to professional jealousies, according to Somtow, but he stayed on in Thailand to launch the Bangkok Opera, the Siam Philharmonic Orchestra and in 2009, the Siam Sinfonietta youth orchestra.
Founded to provide a professional opening for talented young Thai musicians, Siam Sinfonietta has been attracting attention abroad.
The orchestra won first prize in the Summa Cum Laude Festival, Vienna, in 2012, for its rendition of Gustav Mahler’s First Symphony, and recently a Gold Award at the Los Angeles Philharmonic’s Disney Hall, for performances of Prokofiev’s “Lieutenant Kije” and portions of Somtow’s latest “bal-opera” (ballet and opera), “Suriyothai”, which is based on the military exploits of a legendary Thai Queen.
It will compete again in the upcoming Young Euro Classical Festival in Berlin on July 29, and is booked for a concert at Carnegie Hall in New York next year.
Somtow shrugs off barbs from his Thai critics that his youth orchestra is getting recognition only because of its exotic Asian origins.
“In Austria they won first prize not because they are a group of performing monkeys, but because they actually played this music better than the Austrians,” he said.
In training his young orchestra he uses the ‘Somtow method’ of complete immersion in the culture, history and personal experiences of the composer.
For instance, before the Vienna performance, Somtow took his orchestra to Mahler’s home town of Kalischt, Czech Republic, to visit a nearby forest to experience the “naturlaut” (nature) first hand.
They also performed in small Czech churches and inns “to absorb the essence of what the music was about.”
“Somtow has the talent and ability to inspire young musicians with a dedication and willingness to work hard,” says Steven van Beek, a trained classical |musician and Bangkok-based author of numerous books on Thailand.
“You can often judge an orchestra by the way it’s watching the conductor and with Somtow they are riveted.”
Nath Khamnark, the 2nd trombonist in the Sinfonietta, acknowledges that Somtow’s multi-accomplishments as a novelist, a film maker, and a composer/conductor had made him “my idol.”
“Under his baton I feel like everything is fresh and alive,” Nath says. “It’s like everyone is making a painting together.”
Importantly for Somtow, his performances are also beginning to be appreciated more by Bangkok audiences as well.
“For the first time, the theatres and concert halls are completely filled with people who have never been exposed to these and are genuinely emotionally affected by them,” Somtow says of his recent performance of “The Silent Prince”.
“I certainly feel appreciated now,” he says. “That’s why I’m still here.”
Somtow’s Bangkok Opera Foundation has been receiving government funding since 2009, after years of being excluded from state subsidies.
Despite his busy music schedule, Somtow has not abandoned his second outlet for creativity, writing novels.
He is currently working on a trilogy called “The Dragon’s Stones”, about an “an avatar of Vishnu,” in which the Hindu God is born on earth in a Catholic orphanage in Bangkok’s Klong Toey slum.
“In some ways the most satisfying thing in the world is to sit in a room a create something,” Somtow says of his dual career.
“When it’s a book you send it off to a publisher and someone else the deals with it, but when it’s music, after it’s written you have to deal with performing it and that’s when other people, sometimes hundreds, become involved.”