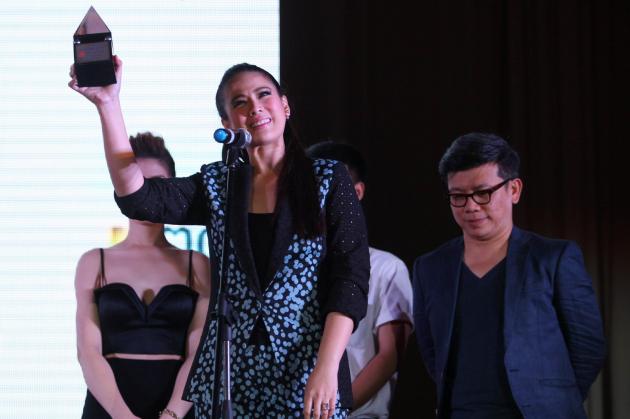 The Bangkok Critics Award fail to stir up any surprises

In what at times seemed like a repeat of this month’s Subhanaghongsa Awards, Thailand’s national film awards, indie pictures “Tang Wong” and “Mary Is Happy, Mary Is Happy” swept seven of the 12 prizes at Wednesday night’s Bangkok Critics Assembly awards.
“Tang Wong” won the critics’ hearts in major categories, receiving Best Picture, Best Director, Best Screenplay and Best Supporting Actor while “Mary is Happy” picked up Best Actress for Patcha Poonpiriya, Best Editing and Best Art Direction.
“Tang Wong” director Kongdet Jaturansamee was understandably delighted at his second big win in two years: he also took home Best Director and Best Screenplay last year for his “P-047”,
“I’m thrilled to even be nominated for the critics awards,” said a beaming Kongdet. “I’ve been following these awards since I was a student.”
Initially selected by the Culture Ministry for its scriptwriting project on Thai cultural themes, Kongdet went on to develop the story into a satirical comedy drama reflecting the eroding state of Thai society and culture through the story of four teenage boys desperate to fulfil a vow they made to a spirit shrine in return for their wish being granted.
Reflecting the often difficult choices faced by the judging committee, this year saw two winners in the categories of Best Actress and the new Young Filmmaker award.
Patcha Poonpiriya of “Mary Is Happy”, who also won Best Actress from the Subhanahongsas, shared her prize with Keerati Mahaphrukpong from the romantic omnibus “Love Syndrome”. Keerati’s acting has been hailed by pundits though she failed to be nominated for the Subhanahongsas.
The Young Filmmakers Award, a new category added this year, was shared by Nontawat Numbenchapon for his documentary “Boundary” and Bongkot Kongmalai and Wiroj Srisithsereeamorn for “Nang Fah” (“Angel”).
Bongkot attended the event on Wednesday night with her husband Boonchai, her first outing since delivering a baby daughter.
“My thanks to the producer who believed in me. I was turned down by another producer who didn’t think I could make them millions of baht with my movie,” the actress-turned-director said.
“I’m delighted about winning the Young Filmmaker award,” added Bongkote’s co-director Viroj with a grin, who is decidedly no longer young or new: he’s has been working for TV dramas and films for decades.
“Grean Fiction” took home the Best Supporting Actress for Vanida Termthanaporn while Nadech Kugimiya was once again rewarded with Best Actor for his role in “Khoo Kam”.
Last year’s top earning movie, the ghost comedy “Pee Mak Phra Khanong, won Best Score for Chatchai Pongpraphapan and the Best Song award went to “Khem Nalika” by Kunlapon Samsen and Warat Prasertlab from the film “Prayoke Sanya Rak”.
The Critics Award Night was hosted by director Tanwarin Sukkhapisit who walked around the hall chatting with guests, actors and filmmakers and making fun of Oscars presenter Ellen DeGeneres by taking selfies with actors on and off stage for Instagram.
As custom dictates, the winners in previous years were also invited to present the awards but a few were forced to stay away due to previous commitments.
Despite being in the gossip columns for conflicts that they would probably have preferred to keep private, former child actress Focus Jeerakun and Inthira “Sai” Jaroenpura both answered present and were on stage to announce the award results.
And, as is also usual with the Bangkok Critics’ casual approach to their ceremony, the event dragged on for four hours – an overly long time to present 12 awards and three special mentions!


List of winners at the Bangkok Critics Assembly Awards