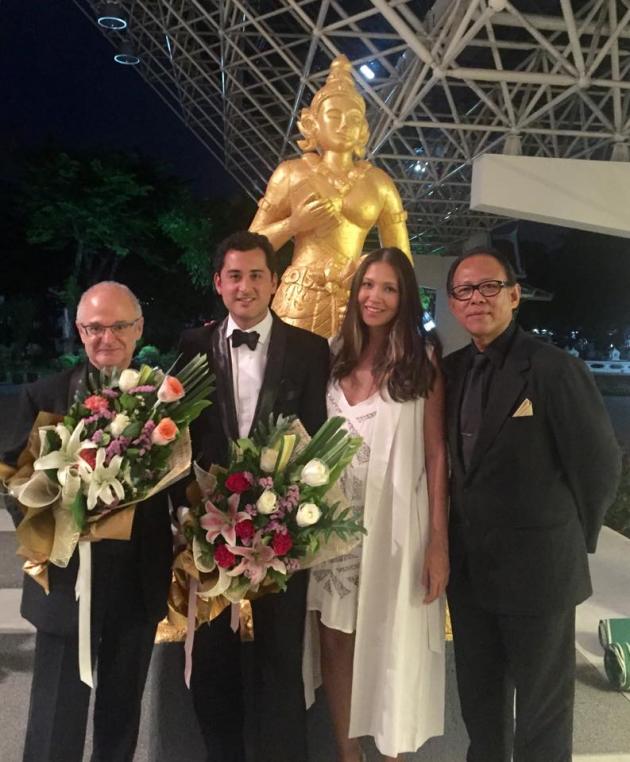 A shot for 'The Last Executioner'

SNUBBED BY THE Thai film industry’s Subhanahongsa Awards, the cast and crew of “The Last Executioner” were feeling vindicated on Tuesday night after winning best picture and screenplay at the 30th Surasawadi Awards at the Thailand Cultural Centre.
Put on by the Thai Entertainment Reporters Association, the long-running movie kudos also awarded “The Teacher’s Diary”, (“Kid Tueng Wittaya”) and “I Fine ... Thank You ... Love You”. Winners received floral bouquets, with the actual prizes, the Tukkata Tong (Golden Doll) statuettes, to be presented in royally appointed ceremonies later in the year.
Directed by Tom Waller and produced by Handmade Distribution, Tiger Entertainment and De Warrenne Pictures, “The Last Executioner” (“Petchakat”) had been nominated in six categories, including best director, leading actor for Vithaya Pansringarm, score by Olivier Lliboutry and costumes by Panyawan Nimjareanpong.
Recounting the moral and spiritual struggles of Thai prison guard Chavoret Jaruboon, the fact-based biographical screenplay was by Chiang Mai-based American writer Don Linder and translated by Katrina Grose, a former actress who also served as associated producer.
Chavoret, portrayed by Vithaya, executed 55 death-row inmates with his rifle. He was the last to carry out the deadly deed with a firearm before the prison system switched to lethal injection. But he also was haunted by bad karma, which took on the form of various characters, such as David Asavonond’s “spirit”. The cast also included Penpak Sirikul and veteran actor Jaran “See Tao” Petcharoen.
Thai-Irish director Waller was cheered by the recognition for “Executioner”, which had previously won best-actor honours at last year’s Shanghai International Festival but had been passed over for awards in Thailand.
“The Surasawadi Awards are one of the oldest and most prestigious awards in Thailand, having been going on and off for 50 years,” said Waller, whose first feature was 2011’s “Mindfulness and Murder”. “Everyone who’s anyone in the Thai film industry has been nominated for one of these awards, so to win it for ‘The Last Executioner” is a real honour.”
“The Teachers’ Diary” was the leading nominee with 15 nods. In addition to best director for Nithiwat Taratorn, the GTH romantic drama about star-crossed teachers at a floating rural schoolhouse was awarded for cinematography and art direction.
Another GTH picture, the English-tutoring rom-com “I Fine ... Thank You ... Love You” took the top acting prizes. It starred Preechaya “Ice” Pongthananikorn as a celebrity English-language tutor who agrees to teach a boorish factory worker (Sunny Suwanmethinon) who wants to win back his US-based girlfriend. It had received three nominations, and in addition to the actor prizes, it was also honoured for being the top-grossing Thai film of 2014.
Other honours went to the indie financial-crisis drama “Concrete Clouds” (“Phawang Rak”), which had 11 nominations and had been a big winner at the film industry’s Subhanahongsa Awards. At the Golden Dolls, Apinya Sakuljaroensuk took the supporting actress prize for her brave turn as a young woman who has a fling with a woefully naive guy in a neighbouring 1997 Bangkok apartment. Writer-director Lee Chatametikool was among a host of folks receiving special honours.
The supporting actor prize went to Pichaya Nitipaisankul from the Phranakorn studio’s horror omnibus “Tai Hong Tai Hian”, in which he played a former monk haunted by an ex-girlfriend. Produced by Poj Arnon, the gory “Tai Hong Tai Hian” also won for hair and makeup.
Leaving empty handed was the romantic comedy-drama “Chiang Khan Story” (“Tukkae Rak Pang Mak”), which scored at the Bangkok Critics Assembly Awards and the 12th Kom Chad Luek Awards, and another leading nominee, the romantic drama “Timeline Jodmai Khwam Songjam”.